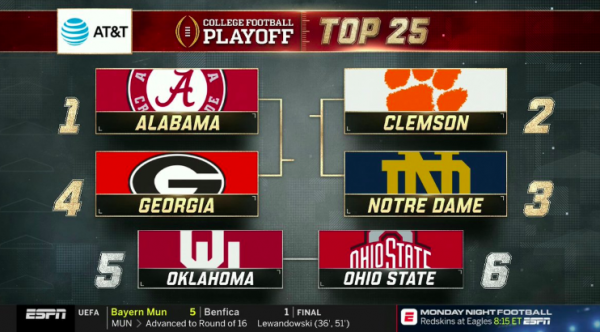 The College Football Playoff selection committee made a choice in the Oklahoma vs Ohio State debate this week. It makes sense–I said that Oklahoma’s resume is certainly superior to Ohio State’s. Unfortunately for us, though, we don’t really know what that decision means.

Once can be laziness, twice is troubling, but three times is an absolute trend. The committee is not showing us that they are comparing or evaluating teams on a weekly basis. For the fourth straight time this year, the selection committee essentially stood by its previous rankings. That’s bad news for college football, which expects the committee to give every team a fresh and fair evaluation.

Is your team in? 👀 pic.twitter.com/L3TlkqmqCA

Committee chair (and Oregon AD) Rob Mullens did tell Rece Davis that the selection committee spent a lot of time debating Oklahoma vs Ohio State. He didn’t go into much detail, though, just saying that Oklahoma’s offense makes up for its defense. Unfortunately, we can’t even really know how much the committee spent on that or whether the members were willing to rethink their preconceived notions. Based on the rest of the rankings, though, it doesn’t seem like that they did.

As we look down the rankings, for the fourth straight time this year, we see no meaningful shuffling, even at the bottom. Michigan, LSU, and West Virginia all dropped three spots for their losses. Washington State fell five positions. Utah State and Pitt also each lost, and they fell out of the rankings for that.

The teams that picked up the good wins over these ranked teams made a few jumps. Washington rose five spots and Texas A&M jumped three positions. Other than that, though, every single change of position was due to jumping a team that lost–save one. In a reversal from last week’s statement, the Ohio State Buckeyes jumped back over UCF. We can’t know if that was entirely due to Ohio State’s big win or partially due to Mackenzie Milton’s injury, though Milton’s injury likely factored into UCF not jumping Michigan.

Other than that, though, there isn’t anything to look at in these rankings. The committee isn’t shifting teams around. The conference call with the committee chair doesn’t address much in the way of specifics these days, so media and fans have even less worthwhile information than in years past. This process is becoming less open, not more, and that’s bad for everyone.

I’ve been pointing it out this year, but there has not been nearly enough focus from the college football world on the fact that the committee isn’t doing its job. The purpose of the selection committee and the weekly rankings are so that college football fans can understand the decision-making and not be blindsided by the selections, like so many were during the BCS years. (The BCS was actually very open about what it did; it was a major failure of the college football media to properly convey the inner workings to fans, but that’s a discussion for another time.) All we know now is that the selection committee finds Oklahoma better than Ohio State. We don’t know why, what the comparison was, or if it really is just because they had Oklahoma ahead four weeks ago.

What we do know is that the selection committee this year has been functioning like just another poll from years past. Wasn’t the committee’s entire purpose to avoid that happening? That’s why they vote in a convoluted fashion and debate teams together. It’s taken until Year 5 of this experiment, but unless this is rectified it seems like the CFP has failed in providing what it promised the fans.