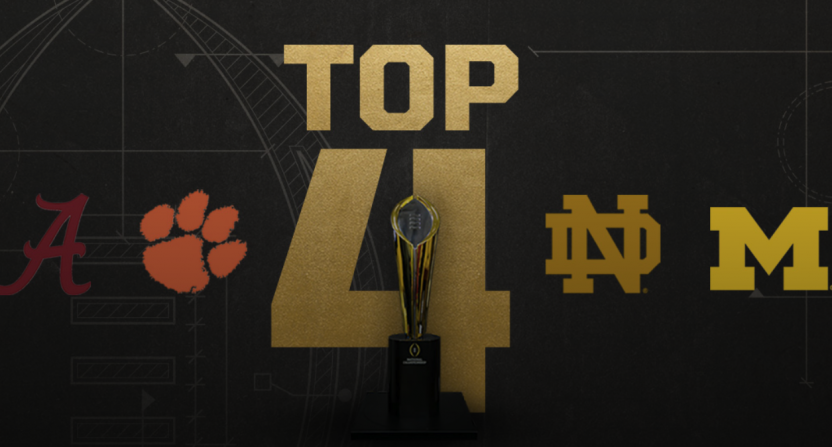 There wasn’t much to be surprised about when the second batch of weekly rankings from the College Football Playoff selection committee were revealed Tuesday evening in between a pair of season-opening basketball matchups between national title contenders. The top four of this week’s playoff ranking were pretty much as expected with Alabama taking the top spot and followed by Clemson, Notre Dame, and Michigan. What was surprising to see was just how much the committee respected LSU, who fell just four spots after suffering their second loss of the season, a 29-0 loss at home to mighty Alabama.

The current top four in the nation were likely without much dispute. Alabama, Clemson, and Notre Dame are all undefeated, and Michigan hasn’t lost a game since the season opener on the road against the Fighting Irish. The two historic rivals appear to continue to be tag-teaming their way up the rankings to each other’s benefit and that may continue to be the case moving forward.

Is your team in? 👀 pic.twitter.com/xWS6h2DT5I

Sitting just on the outside looking in on the top four is No. 5 Georgia, along with No. 6 Oklahoma. LSU, at 7-2 with losses to No. 1 Alabama and No. 15 Florida, is easily the highest-ranked two-loss team and finds themselves in a very favorable spot by the committee. LSU is still sitting in front of 8-1 Washington State, 7-1 West Virginia and 8-1 Ohio State. This appears to be the case because LSU has wins over No. 5 Georgia, No. 16 Mississippi State and No. 24 Auburn. Between West Virginia, Ohio State and Washington State, the three teams have combined to beat two teams currently ranked in the latest ranking (Ohio State beat No. 20 Penn State and West Virginia beat No. 19 Texas). This is clearly a case of the overall quality of wins pushing a team ahead of others even though the losses are more abundant. And considering LSU’s two losses came against ranked teams and all three of the losses between West Virginia, Washington State and Ohio State came against one combined team ranked by the committee (West Virginia lost to No. 22 Iowa State), LSU’s position in the ranking starts to make at least a little more sense.

But LSU also lost at home 29-0. Even though that most recent loss came to the No. 1 team in the ranking, one has to wonder just how badly LSU would have had to lose to drop farther in the ranking.

So here’s some food for thought, given what we have just witnessed with LSU. What happens if Georgia manages to creep up to the No. 2 or No. 3 spot before facing top-ranked Alabama in the SEC championship game, and the Bulldogs lose by a single possession in the final minutes or in overtime to the Tide in the SEC championship game? It would be Georgia’s second loss, but how far would Georgia then drop if LSU can lose at home 29-0 and fall just four spots?

A few things would probably still need to happen in order for a two-loss team to make the College Football Playoff, as one has yet to make the field, but the way this season has been going, whos to say it’s impossible at this point?

The committee just won’t give UCF any breaks

We can probably come to an understanding that UCF was never going to get a shot at the College Football Playoff even if they won every game this season. But the latest ranking shows it’s incredibly difficult for any Group of Five program to get a fair shake. UCF debuted at No. 12 in last week’s initial rankings and they remain No. 12 this week. My colleague, who usually handles this post-ranking commentary, even went so far as to applaud the selection committee for respecting what UCF has done to that point.

Now, I’m going to offer some criticism toward the committee for how it handled UCF this week.

Part of the reason for that is because West Virginia moved up in the ranking and the shuffling of teams ahead of the Knights by the committee failed to open up space for UCF to move up following a close call last week against Temple.

So why should UCF fans be miffed this week? It’s not just because a two-loss LSU is sitting five spots ahead of the undefeated UCF. It’s because there are two teams from the SEC with two losses in front of them. At No. 11 sits Kentucky, fresh off a 34-17 home loss to Georgia this weekend. For two SEC teams to suffer double-digit losses at home for their second losses of the year and still sit in front of UCF is more than enough reason for UCF and the American Athletic Conference and other Group of Five fans to cry foul.

There’s only one other Group of Five team in this week’s ranking as well, with No. 23 Fresno State representing the Mountain West Conference. No Utah State? No Cincinnati? Heck, a two-loss Boise State is probably worthy of inclusion in the ranking at this point, as well as Buffalo.

We see in the top four that undefeated Notre Dame is staying ahead of one-loss Michigan. Even if you think Michigan is the better team at this point in the season, the Week 1 result from South Bend between the two programs is helping to keep Notre Dame ahead of the Wolverines. Throughout the poll, we see that head-to-head matchups between teams are leading to some predictable rankings as well.

It’s encouraging to see head-to-head results matter in the ranking, otherwise, the regular season really would lose value. That doesn’t mean exceptions can’t be made at some point, but seeing the committee respect head-to-head results when there are close rankings between teams is a positive development, even if it can be a pretty predictable method.

With our current top four currently in place, it seems pretty simple. Alabama, Clemson, Notre Dame, and Michigan can wrap up a playoff spot by winning all of their remaining games. None of these four will face each other, so winning out would give you an SEC champion, an ACC champion ,and the Big Ten champion along with an undefeated Notre Dame. That’s a pretty sexy looking playoff field in terms of college football history, and the coaching quartet of Nick Saban, Dabo Swinney, Brian Kelly, and Jim Harbaugh is not short on material at all. It would also have the potential to be the most defensive-oriented playoffs yet: two top-three defenses (No. 1 Michigan, No. 3 Clemson) and two more top 25 units (No. 11 Alabama, No. 25 Notre Dame).

The Big 12 is still within striking distance with Oklahoma and West Virginia in the mix. If either can be a one-loss Big 12 champion, they would have a case to be heard regardless, although they would probably need one of the top four to lose, and for one of those teams to lose not be Alabama. The Pac-12 will continue to hope for the best with Washington State, but the Cougars may be stuck with the Pac-12 not exactly loaded with quality that will impress the committee.

At No. 10, Ohio State shouldn’t be forgotten about just yet either, but the Buckeyes won’t have too many cards to hold if they end up as a one-loss Big Ten champion other than (hypothetically) beating Michigan. It won’t be enough to pass Notre Dame, perhaps even if the Irish lose a game, because Notre Dame beat Michigan too (the Irish’s best case scenario with one loss would be to lose a close game against No.13 Syracuse). Ohio State could be chasing the Big 12 champion (Oklahoma and West Virginia), but the Buckeyes could say they owned a win against a Big 12 team in their neck of the woods (TCU, but that win doesn’t hold a lot of water these days).

And then there’s LSU. If Oklahoma and West Virginia hand each other losses, and Alabama beats Georgia in the SEC championship game, and Michigan or Notre Dame lose, is there really a chance LSU could sneak into the playoff with two losses? The committee has seemingly presented that as a possibility, but it’s important to remember how the committee works and why LSU may end up being stuck anyway. Consider the idea the committee works with fresh data points that are updated each week and the rankings are formed from scratch. A lot of this will change as more games are played. One-loss teams will have opportunities to show the committee whether or not they are worthy of being ranked ahead of LSU.

So here we go with another week of college football that will undoubtedly have some impact on next week’s rankings. Who will survive Week 11?

1 thought on “What the CFP Selection Committee taught us: LSU shows you are graded on an Alabama curve”