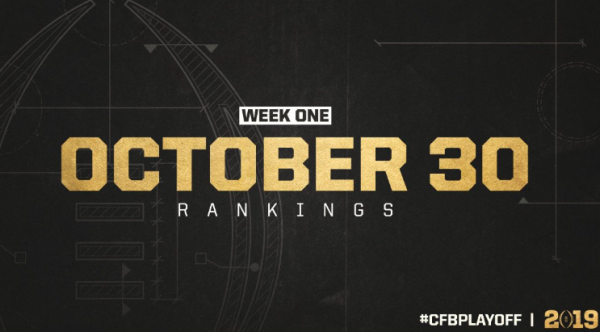 In many ways, the initial College Football Playoff rankings of the year are usually the most interesting. Or–to put it more accurately–they answer the most questions. The final rankings, obviously, are the most important ones. But the stated goal of this process is to give fans an idea of what the selection committee is thinking throughout the season.

Therefore, the early rankings tell us a lot of useful things. How does the committee view certain teams? Certain conferences? Future weeks will tell us whether the committee is re-evaluating every week or just sticking with what they thought the week before. (Or, as usually happens, a combination of the two.) But the first week gives us the first real look into how the committee values certain factors.

For example, before tonight we had no idea how the committee viewed the Pac-12. Did they care more about Alabama’s weak schedule or about the Crimson Tide’s dominance? Which is the committee valuing more this year: better wins or worse losses? The committee changes every year, and therefore so do the answers to these questions. This week gives us the answer to all of these–and more–questions. Of course, the committee can change its mind and learn new things as the season goes on. At the very least, though, we now know what they’re thinking right now, and that fundamentally sets the stage for the rest of the season.

Honestly, no team has a dazzling resume this year, and everyone from the obvious top three are a mess. Many possible selections are justifiable, but consistency will be important. So, what did the committee do consistently, and what did it contradict itself on?

Is your team in? 👀 pic.twitter.com/CnmGi1MMVx

At the very top, the committee decided that eye test mattered more than resume. Then again, Alabama’s eye test is just about one of the best eye tests we’ve ever seen. The Crimson Tide haven’t really been challenged yet, but they’ve been one of the most dominant teams in the past few decades against the teams they have played. After that, though, the selection committee decidedly went more with resume than anything else.

LSU ahead of Notre Dame might surprise some–and it might look like an indication that eye test is more important than resume–but it really makes sense. Notre Dame has that Michigan win to hang its hat on (and the selection committee clearly really likes Michigan), but after that the resume has mostly fallen apart. Neither Stanford nor Virginia Tech is currently ranked, and those are the only other teams with winning records that Alabama has beaten.

Don’t be surprised with Kentucky at No. 9, either. The Wildcats have clearly struggled in several games, most notably the last two, but the resume is strong. That win over Florida is clearly carrying a lot of weight, as is the win over Mississippi State. Kentucky’s nonconference schedule is atrocious this year (no thanks to rival Louisville). We’ll have to see if the selection committee will eventually hold that against the Wildcats if it’s a close call with someone else later.

The last major team to take note of is UCF. Last year, UCF debuted at No. 18. This year, with a resume decidedly less impressive, UCF was No. 12. I ripped the selection committee last year for not properly appreciating UCF. This year, the committee seems to be doing the opposite. Ranking UCF ahead of West Virginia, Utah, or Iowa, or even Texas A&M, means that the committee is valuing UCF at far more than it should be worth

Rece Davis asked Rob Mullens this exact question, and Mullens mostly dodged it. He did point out that UCF is the only ranked team without a win over a team with a winning record. Yet, the Knights still ended up at No. 12. In fact, that’s paradoxical. Last year, with much better wins, UCF started at No. 18. UCF is starting six games higher this year with its best games ahead of it. That should give a lot of hope to UCF fans, and I’m really not sure why the committee is doing it. Maybe they want to set up to put UCF in the Playoff if there aren’t four great resumes out there. It’s something to keep an eye on.

That brings up another important note: Once again, the committee seems to view a winning record as an important indicator for strength of schedule purposes. The committee has consistently done that in the past. And while it’s a terrible metric to use (for obvious reasons), it is something consistent to look at.

Rest of the rankings

The bottom of the rankings were hard to judge this year. We have seen numerous losses by teams in the back half of the AP and Coaches’ Top 25 multiple times this year. It’s hard to fault or justify any rankings. The committee was consistent that good wins mattered more when we got back here. The one real exception is #22 Boston College, which doesn’t really have any meaningful wins. Maybe the selection committee is valuing the win over Temple, but that is a ranking to keep an eye on. Of course, Boston College also has a loss to Purdue. Ranking Boston College as well means that the committee doesn’t have to view Ohio State’s loss as a bad one.

#15 Utah and #16 Iowa are both ranked higher than some might have expected. Both have solid wins–Utah has beaten Stanford, USC, and NIU, and Iowa’s win over Iowa State just gets better and better. The same applies to Syracuse and N.C. State. Don’t think that there’s some ACC bias in the committee’s rankings. The ACC actually has the best collection of teams with at least one good win and no awful losses. Even Virginia’s loss to Indiana isn’t too bad; Indiana might be 4-5, but the Hoosiers have two good wins and every loss is to a team 4-4 or better.

There are also three three-loss teams in the initial rankings. All three share some common characteristics. Each have at least one win over a ranked team. In the cases of Iowa State and Texas A&M, those are teams with no other losses. Mississippi State’s ranked win is over Texas A&M, but all three losses are to teams in the Top 11. Iowa State is the one slight outlier, with a bad loss to TCU, but they’ve beaten West Virginia, Oklahoma State and Texas Tech.

There are some broad trends that we should keep an eye on. What does the committee do moving forward as wins get better or worse? None of the top teams have great resumes so far; what happens if that changes? Will the committee continue to value resume over eye test? What will the selection committee do when teams pick up bad losses; will it prioritize good wins or bad losses more? Why isn’t Houston ranked, and can Fresno State stay ahead of the Cougars moving forward? And, lastly, will the committee stay consistent in valuing wins over teams with winning records? Or will it finally begin to mention a better metric of SOS and quality wins?