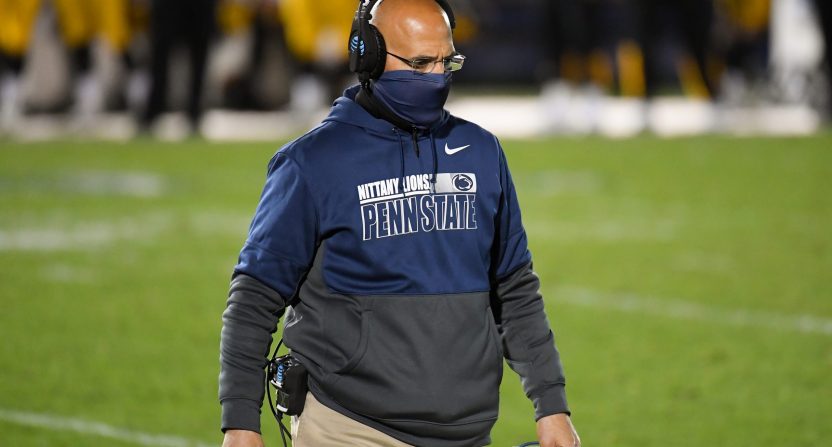 That’s probably the most common question popping up each week as Penn State continues to stumble into unprecedented history in an unprecedented season. Penn State lost at home to the Iowa Hawkeyes 41-21 on Saturday afternoon in front of a mostly empty Beaver Stadium. If there’s a blessing in the pandemic world in which we live, it may be that Penn State fans aren’t able to witness this team play in person and can stay in the comfort of their own homes and flip the channel when needed.

Iowa with a LARGE GUY 71-YARD PICK-SIX to put away Penn State (who will fall to 0-5). pic.twitter.com/LntGyiEfij

Penn State’s latest loss dropped the Nittany Lions to a perplexing record of 0-5. It’s the worst start to a season in Penn State’s history, and they’ve been playing football since the 1880s. Not even some of the worst teams in program history have struggled to find a win the way this 2020 version has. But before you go overboard with the idea that James Franklin all of a sudden needs to be removed as head coach, it’s important to keep a few things in perspective with regard to this particular season.

Simply put, this is not at all the same team that celebrated a victory in the highest-scoring Cotton Bowl in Cotton Bowl history last December against Memphis. Between the significant coaching staff turnover (former offensive coordinator Ricky Rahne took a handful of assistants with him when he became head coach at Old Dominion), and the absence of players like Micah Parsons (opted out) and Journey Brown (medically retired), it has been a difficult season to get on track for Penn State. And it may even get more difficult. Penn State’s top tight end, Pat Freiermuth, didn’t dress for the Iowa game and will undergo season-ending surgery, as he — in all likelihood — is heading off to the NFL after this down year.

Penn State is now staring at the real possibility of an 0-6 start as they head to Michigan next week. Michigan Stadium has been a bit of a house of horrors for Penn State ever since they joined the Big Ten in 1993. With rare exceptions, Penn State routinely comes home with a loss to the Wolverines. If there’s no sugar-coating on an 0-5 record, there will be absolutely no way to argue about positive developments if Penn State returns next week with a record of 0-6.

But is the sky really falling in Happy Valley, or is this just a bizarre outlier? Given the track record of James Franklin since his arrival at Penn State seven years ago, there should be enough evidence to suggest this is far from the norm for the program. But that shouldn’t mean Franklin and Penn State should be free from criticism. There’s still plenty to criticize, and it’s valid to do so. Penn State has been outscored in the first half of games, 117-33, suggesting that no matter the situation every week, the Nittany Lions are simply not prepared for it. That falls on the coach.

But, on the other hand, Penn State does tend to play better in the second half of games. The offense gets in more of a rhythm. The defense makes more stops. Penn State hasn’t quit in any of their games, so there’s something good going on beneath the surface of an 0-5 season. The last two weeks haven’t been pretty for Penn State, but it’s not at all time to suggest it’s time to move on from Franklin being in charge of the program.

But avoiding an 0-9 season would probably help the cause.