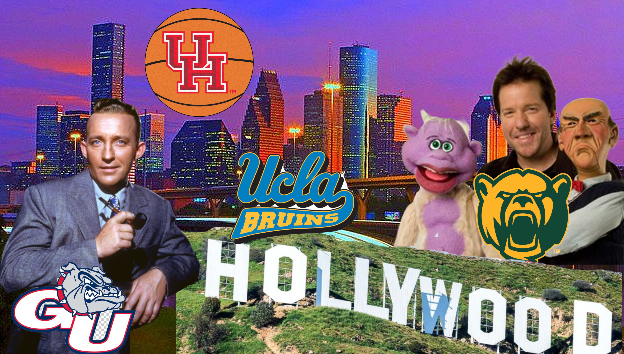 We made it to the 2021 Final Four. Congratulations all around. No small feat considering the pandemic. Only one game was canceled due to COVID-19, and no teams had to participate with just five healthy players. America’s great sporting event prevailed.

For the first time ever, no schools East of the Mississippi River reached the national semifinals. Three of the programs have never won an NCAA championship. And all four coaches are seeking their first title.

Who’s going to win it all? Who can claim cultural superiority?

Here at The Comeback, we’ve done the homework so you don’t have to.

Academic bragging rights: The University of Houston Law Center is ranked No. 11 for part-time law.

Reason to celebrate: Get ready to party like it’s 1984. College basketball hasn’t mattered this much in Houston since Hakeem Olajuwon left campus.

Greatest athletic achievement: The men’s golf program has won a record 16 NCAA championships. But that’s not what resonates with most sports fans.

Phi Slama Jama remains legendary despite never winning a championship. They went to three Final Fours and were NCAA runners up twice with Olajuwon. They were poised to win it all in 1983 until they lost in one of the most stunning finishes in sports history.

The lowdown: The city of Houston has something to be proud of after experiencing an avalanche of bad press. Over the past year, there has been mass exodus of star athletes including J.J. Watt, James Harden, Deandre Hopkins, and George Springer. Deshaun Watson might soon join them and is facing several lawsuits with disturbing details. Yes, the Houston Astros won the 2017 World Series, but even that’s tainted by the cheating scandal and the players are still hearing about it.

So, rejoice over these Cougars. Everything is bigger in Texas and Houston is America’s fourth largest city. This town is so big it has multiple skylines and is one of the most ethnically diverse places in the United States.

How did the University of Houston arrive on the national stage? It took a chance on Kelvin Sampson, a talented coach with some baggage. He’s gone from show-cause penalty to the Final Four. This must sting the fans of Indiana University who will watch him compete for the championship in Indianapolis.

Academic bragging rights: The entrepreneurship program in the Hankamer School of Business is ranked No. 6.

Reason to celebrate: Get ready to party like it’s 1950. Baylor’s last Final Four trip was so long ago that the NCAA tournament featured just eight teams. The Bears lost in the national semifinals to Bradley.

Greatest athletic achievement: The most dominant force on campus belongs to the women’s basketball program. The 2011-12 squad is on the short list of greatest ever, going 40-0 led by Brittney Griner. The Lady Bears have won three national championships (2005, 2012, 2019) under Kim Mulkey.

The lowdown: There’s no way around it. The city of Waco has an image problem, mostly due to the infamous 1993 standoff between the federal government and the Branch Davidians that resulted in the deaths of 76 people. The city has worked hard to transform itself, and Baylor’s athletic success has been a big part of that makeover.

Baylor is the only private institution in the Big 12. It has made an increasing commitment to its athletics programs and enjoyed some success, but has also dealt with awful moments. The basketball team endured one of the worst scandals in sports which included a player killing a teammate. Art Briles had success with the football team, but was fired after a sexual assault investigation involving his players.

Scott Drew took over the basketball team after the Dave Bliss mess and has built a consistent winner. It was a long journey, but after almost two decades, he has a legitimate shot at a championship.

Academic bragging rights: The Geffen School of Medicine is ranked No. 12 for primary care.

Reason to celebrate: Get ready to party like it’s 2008. The last time UCLA was in the Final Four its lineup featured Russell Westbrook, Kevin Love, and Darren Collison. These current Bruins are not as famous.

Greatest athletic achievement: UCLA as an underdog is hard to fathom, because no men’s basketball program has won more NCAA titles than UCLA’s 11 championships. Legendary John Wooden coached the Bruins to 10 of those.

The Wizard of Westwood presided over four undefeated teams. The best of the bunch, and probably the greatest college basketball team of all-time, was the 1971-72 squad. Led by Bill Walton and Henry Bibby, they won their games by an average of 31 points.

The lowdown: Los Angeles is having a moment. The Lakers and the Dodgers are reigning champions. Now, UCLA has come out of nowhere. Who could have predicted this? Um, nobody. A city consumed with glitz has an unglamorous team. Mick Cronin could walk the streets of downtown L.A. without being noticed. The tourists are too busy hoping to catch a glimpse of a star (hey, isn’t that Ryan Gosling over there?).

Cronin wasn’t UCLA’s first choice to replace underachieving Steve Alford. It flirted with Tennessee’s Rick Barnes and TCU’s Jamie Dixon before settling for Cronin, who was tired of feeling underappreciated at Cincinnati. Cronin’s Bruins aren’t exciting, playing at one of the slowest paces in the nation (No. 338 in tempo according to Ken Pomeroy’s rankings). They were fortunate to receive an at-large bid to the play-in game. That luck has continued in the tournament, winning two games in overtime and upsetting top-seed Michigan 51-49. Credit Cronin for his tough-minded squad. Also, gotta love Tyger Campbell’s hair and Cronin’s father.

Academic bragging rights: The Graduate School of Business Administration is ranked No. 46 for part-time MBA.

Reason to celebrate: Get ready to party like it’s 2017. For the second time in five years, Gonzaga is in the Final Four. That season, Bulldogs were defeated by North Carolina in the championship game.

Greatest athletic achievement: This could be it. The school has never won an NCAA title, but has its best shot now. A championship would complete the program’s rise from mid-major darling to an established power.

The lowdown: The internet tells me that Spokane is famous for once hosting the World’s Fair. Bing Crosby grew up there and even played baseball for Gonzaga. But let’s talk about Spokane Hoopfest, which claims to be the world’s largest 3-on-3 outdoor basketball tournament. Over 6,000 teams compete on 450 courts than span 45 city blocks. That’s amazing. These people really love their basketball. Heck, sometimes Kevin Durant will show up.

Basketball will be even bigger if Gonzaga can complete the first perfect season since the 1976 Indiana Hoosiers went 32-0. The Zags have been the best team all season long, with an unstoppable offense that passes the ball with uncanny precision. You try defending Jalen Suggs, Corey Kispert, and Drew Timme.

In a tournament full of upsets, Gonzaga looks like a sure thing. Kudos to Mark Few for sticking around for over 20 years to create a basketball power at an unlikely place.

Houston vs. Baylor: The first all-Texas national semifinal is a meeting of old Southwest Conference rivals. These schools haven’t met since 2003 (for what it’s worth, Houston leads the all-time series 38-15). Sampson and Drew should coach this one in cowboy hats and boots. Take Houston for the upset.

UCLA vs. Gonzaga: Imagine awakening from a 50-year coma and discovering that the undefeated juggernaut in this matchup is NOT the Bruins. Expect Gonzaga to roll.