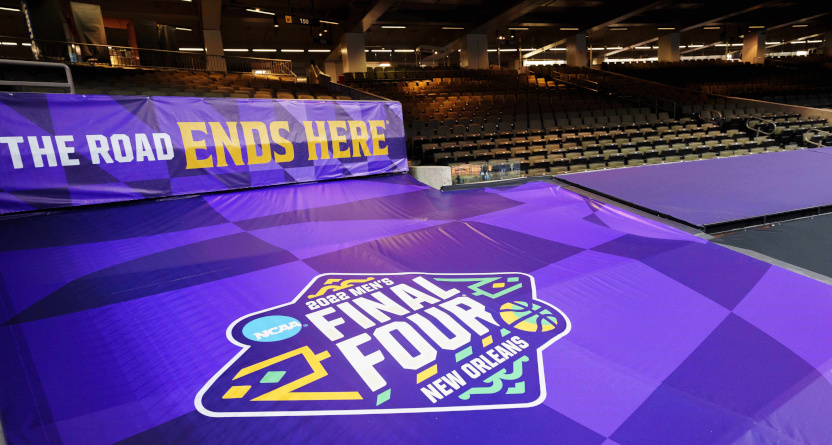 We made it to the Final Four. Congratulations all around. Welcome to the most blue-blooded national semifinals of all time. North Carolina, Duke, Villanova, and Kansas have all won multiple championships and have combined for 17 titles.

Who’s going to win it all? Who can claim cultural superiority? Here at The Comeback, we’ve done the homework so that you don’t have to.

Reason to celebrate: Get ready to party like it’s 2017. The Tar Heels are gunning for their seventh national championship. Only UCLA (11) and Kentucky (8) have more.

Greatest athletic achievement: There have been many outstanding North Carolina basketball teams, but none is more iconic than the 1981-82 squad which had James Worthy, Sam Perkins, and a guy named Michael Jordan.

The lowdown: North Carolina is trying to complete one of the most successful succession plans ever. Roy Williams coached the team to three titles before retiring after last season. His hand-picked successor, Hubert Davis, will try to accomplish something that neither Dean Smith nor Williams did: win a title in his first year.

Davis’ rookie season started rocky. The Tar Heels were blown out by Kentucky, Miami, and Wake Forest. They lost at home to Pittsburgh. But they found their mojo, winning 10 of 11, including stunning Duke in Mike Krzyzewski’s final home game. Davis has another chance to beat Krzyzewski in the first tournament meeting between these two Tobacco Road programs.

North Carolina has been so good for so long that we’ve almost forgotten about that huge academic scandal. Fake classes? Who cares? These trophies are real.

Academic bragging rights: The School of Medicine is ranked No. 6 for research by US News & World Report.

Reason to celebrate: Get ready to party like it’s 2015. Krzyzewski, the modern-day John Wooden, could retire by winning his sixth championship. Only Wooden (10) has more.

Greatest athletic achievement: The 1991-92 repeat Blue Devils are on the shortlist of the best teams ever. The starting lineup: Christian Laettner, Grant Hill, Bobby Hurley, Thomas Hill, and Antonio Lang. Cherokee Parks came off the bench. All six were drafted and four were first-round picks.

The lowdown: Few sports teams are hated this much. Fairly or not, Duke basketball is despised for reasons that are probably rooted more in perception than reality. Duke gets all the calls. Duke gets all the hype. Duke gets all the annoying players (Christian Laettner, Shane Battier, JJ Redick, Grayson Allen, etc.). But those are Duke teams of the past. This squad doesn’t have a supervillain. Paolo Banchero is the team’s best player, but most people aren’t seething with rage when he’s on the court.

CBS executives love Duke because that means monster ratings. People will tune in to root for or root against the Blue Devils. Especially with Krzyzewski trying to end his career in storybook fashion. Boo all you want. We’re going to miss Coach K when he’s gone.

Academic bragging rights: The College of Nursing is ranked No.23 by US News & World Report.

Reason to celebrate: Get ready to party like it’s 2018. The Wildcats are seeking their third national championship in seven years.

Greatest athletic achievement: The 1984-85 squad is certainly not Villanova’s best team. But its monumental upset of the defending champion Georgetown Hoyas is one of the defining moments in NCAA history.

The lowdown: Philadelphia fans are infamously angry. They get pissed off about the Eagles (even after a Super Bowl), the Phillies, the Sixers, and the Flyers. But when it comes to college basketball, there is little to complain about. Villanova doesn’t have the budget of Duke or Kentucky, nor does it get as many elite recruits. But the Wildcats have been more successful recently than both of those programs.

What Jay Wright has accomplished is remarkable. Many Big East schools have tried and failed to recapture their glory days from the 1980s (Georgetown, St. John’s, Seton Hall, and Providence). Villanova is the one school that has been able to surpass its previous excellence. What could stop this feel-good story? Team captain Justin Moore tore his Achilles in the Elite Eight victory over Houston. One more hurdle to overcome.

Academic bragging rights: The Department of Special Education is ranked No.2 by US News & World Report.

Reason to celebrate: Get ready to party like it’s 2008. The Jayhawks are trying to win the fourth NCAA title in program history, which would tie them with Connecticut for sixth-most.

The lowdown: On one hand, you have to admire Kansas. The school has stuck by Bill Self even though the NCAA has been sniffing around. They even doubled down on their commitment by giving Self a lifetime contract. It takes balls to be that committed to your basketball coach. Then again, it’s the same university that invited Snoop Dogg to perform at Midnight Madness and dared to be shocked when Snoop Dogg acted like, well, Snoop Dogg. That’s Kansas for you. Always playing the victim.

The last time the Jayhawks were in the Final Four, they were blowtorched by Villanova, 95-79 in 2018. This game figures to be more competitive. Kansas doesn’t have its usual group of blue-chip recruits, possibly due to the NCAA investigation, but the Jayhawks are talented enough. Plus, wouldn’t it be funny to see this embattled program win it all on Mark Emmert’s watch?

North Carolina vs. Duke: We spent the whole season bashing the Atlantic Coast Conference. Now, one of those teams will play for the championship. Most people are picking Duke and the Krzyzewski story. But what about the Brady Manek story? He is a doppelganger for Chris Barron, the Spin Doctors’ lead singer. Take North Carolina.

the announcer just said that #UNC player brady manek looks like the lead singer of the spin doctors and i— #MarchMadness pic.twitter.com/11IkC1buA3

Villanova vs. Kansas: Kansas is probably the best team remaining. Plus, Remy Martin has shaken off early-season injury and inconsistency to be the Jayhawks’ best player in the tournament. Meanwhile, Villanova is a man down with Moore out. Pick Self and his questionable hair to advance.