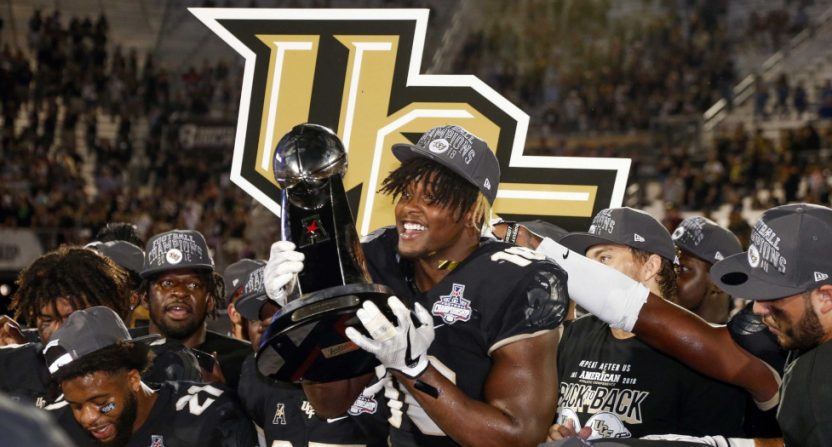 Bowl season started off with a bang on Saturday, with multiple teams (most notably Utah State and Appalachian State) flexing some muscle, while Georgia Southern came back to beat Western Michigan on a last-second field goal. No #CollegeKickers shenanigans ruined things this time. As we get into the real swing of bowl games, though, we should pay to attention to one of the more interesting battles for college football supremacy: the Bowl Challenge Cup.

Started by ESPN following the 2002 season, the Bowl Challenge Cup is simple. The conference that does the best across all bowl games wins. Early on, ESPN would promote the competition for the Cup often. It was fun. Of course, it was also silly–luck and matchups often go far further in determining a conference’s chance at the Cup than actual depth or strength–but so are so many of the fun things that we do. After the Big Ten won the inaugural Cup with Ohio State’s victory in the National Championship Game (the Fiesta Bowl that year), the Challenge seemed like it was here to stay.

Very quickly, though, ESPN noticed a problem, and has been much more low-key about the Cup since then. The “mid-major” conferences–often due to more convenient matchups–were winning the competition. From the 2004 through the 2010 season, the Mountain West Conference won the Cup four times. The MWC hasn’t won since, but those four Cups are still more than any other conference. (Conference-USA and the ACC have each won three, though one of each of those was a tie with another conference.)

Still, it’s fun to keep track of. Who will win this year? Crazy things often happen in bowl games, but we can see who the favorites are.

First of all, six FBS bowl games have already been played, and the Mountain West is off to a strong start at 2-0. What are the full standings so far?

The Big Ten, Big 12, ACC, and SEC have yet to play a bowl game. The ACC’s bowl season will begin on Saturday, the Big Ten and Big 12 a week from Wednesday, and the SEC a week from Thursday. Each of those conferences have at least seven teams playing in bowl games (the ACC and SEC each have 11), so there will be some intense jockeying for the best season early on.

How will the Bowl Challenge Cup standings look if the favorite wins every game? Taking the consensus line from Vegas Insider, we would get the following (please note that the Cheez-It Bowl between Cal and TCU is listed as a toss-up, so that game will not be reflected in this):

The betting odds love the SEC here, and are really down on the Big Ten, ACC, and Big 12. Of course, considering the fact that the Big 12 and SEC play four games against each other and that the SEC is favored in all four games, the numbers make more sense. Vegas is predicting an SEC domination and the conference’s third Challenge title in the last six years. Don’t forget that according to Vegas, the SEC and ACC will have another game against each other in the National Championship Game, as Alabama and Clemson are each double-digit favorites in their respective CFP semifinal games.

Of course, Vegas is not the only one out there predicting games. Which conferences are in the best shape according to other predictors out there? Well, let’s look at SBNation’s Bill Connely and his S&P+ predictions, to start. These are how the standings will look, according to his predictions:

A few upsets can make all the difference. S&P+ projects that UCF (seen above celebrating the AAC championship) will beat LSU, which knocks the SEC behind the Sun Belt. Add that to the fact that S&P+ really dislikes Army, and all of a sudden the AAC is projected to have the best bowl record. That will definitely spur some Power 6 talk into the offseason–especially considering that four of the conference’s seven games are against P5 teams, and a fifth is against a ranked Army team.

Of course, part of the beauty of the bowl games is that literally anything can happen. Bowl season is a crazy time of year, where the point spread matters far less than during the season. (I don’t have hard data to back up that last statement, actually, but that’s certainly the general feeling.) Especially when looking at something like overall conference records, where even one upset can change things for two conferences, like we just saw above.

We’ll sit back and enjoy the games, and then the conference grandstanding can go on all offseason.