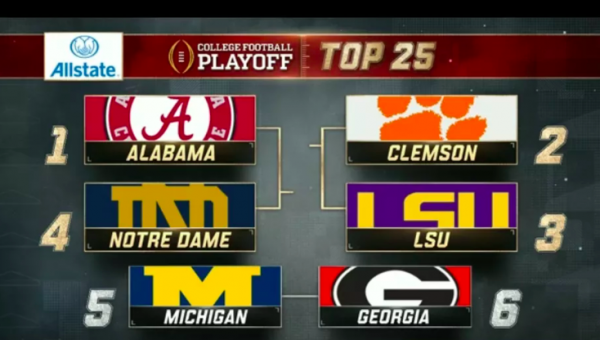 We are nine weeks into the college football season, and we will see five more weeks of play before the CFP selection committee determines who will compete in the Playoff. By my count, 19 teams remain in contention to make the CFP.

Of course, the initial CFP selection committee rankings on Tuesday night renewed speculation among fans about what their team needed to do to get in. It also inspired very fun Twitter posts, like this one:

Texas in the @CFBPlayoff?

My short 35-step process to get them there: pic.twitter.com/M9c75KEexO

Does Texas actually need all 35 of those steps to make the Playoff? Actually, no. The Longhorns would be ahead of Utah even if the Utes also win out. Still, that was fun to watch and read.

That brings us to the purpose of this post. I am going to present the best-case scenario for every team still alive in the Playoff race. These are not the only scenarios – it’s still way too early to pin down specific outcomes. But these are what the 19 teams still alive should hope for the most.

Paths to the Playoff

Alabama is in if it wins out, or if it wins the SEC at 12-1. Alabama is probably in if it loses to LSU and finishes 11-1, though that would depend a lot on what else happens around the country. In short, it’s good to be Alabama right now. Just don’t lose two games.

Honestly, the same rules applies to Clemson as to Alabama. The Tigers have slightly less leeway if they fail to win the ACC (especially if Boston College somehow manages to defeat them handily), but that’s it. Go 12-1 and you’re in. Go 11-1 and you’re probably in, but you might need a small bit of help. Just don’t lose two games.

The Irish might be miffed at being behind LSU, but that really doesn’t matter. If Notre Dame wins out, it’s in the Playoff. If the Irish lose one game, they can probably still get in as well, though they’d be best served if Michigan wins the Big Ten, and preferably after losing to Penn State. Oh, and a two-loss Big 12 champion wouldn’t hurt either.

More or less control own destiny

It’s really easy to paint this week’s game against Alabama as “do or die.” That would be tempting, but wrong. The committee put LSU at No. 3, and the Tigers still get to close the season against a ranked Texas A&M team. If LSU can keep the game against Alabama close, then the Tigers only need some Big Ten and Big 12 chaos to get in. A 10-2 LSU team would very likely have a stronger resume than 12-1 Washington State, though the Tigers don’t want it to come to that.

The Wolverines are in if they win out. Don’t start with the “but what if Georgia wins out and Alabama finishes 12-1” scenarios, because a 12-1 Michigan would get in before a 12-1 Alabama team that loses the SEC Championship Game. There are just too many quality wins on this resume, and a better loss than Alabama would have, to boot. (If Notre Dame loses a game and the loss gets worse, that’s fine anyway because Michigan would likely – though far from definitely – jump an 11-1 Irish team.) If Michigan loses another game along the way, though, it will need a lot of help to get in.

Unlike last year, Georgia doesn’t have any good nonconference wins. Georgia also doesn’t have any good cross-divisional wins. Auburn is looking like a 7-5 team at best, and Georgia already lost to LSU. The good thing for Georgia is that there are two valuable wins (Florida and Kentucky) in the SEC East. The bad thing for Georgia is that this resume won’t be enough without an SEC title, unless there are insane levels of chaos. There’s no chance at all without an SEC East title. Georgia will be eliminated with a loss to Kentucky this week.

Literally everything I just said to Georgia above applies to Kentucky. Win the SEC East to have a chance; run the table and you’re a lock.

That loss to Purdue was ugly. Unless the defense gets seriously fixed, and fast, this team won’t be in the Playoff conversation even before facing Michigan. Assuming Ohio State can win out, though, this should be a Playoff team. The Buckeyes have a solid collection of wins, though not as great as they once did. Then again, no one has great wins this year. If Alabama loses the SEC Championship Game and is 12-1, then maybe Ohio State would be left out in favor of the Tide (again), but it’s not so likely.

Starting off at No. 7 is a good sign for the Sooners. Their only problem is that more than four teams control their destinies ahead of them. Oklahoma needs two losses from either Clemson, Alabama, or Notre Dame. One Notre Dame loss might be enough, especially if it’s not a close game. If that doesn’t happen, all the Sooners need is the Big Ten West champion to upset the East champion in the Big Ten Championship Game. Oklahoma is essentially out with a second loss, barring major chaos.

The Montaineers are in a similar boat as Oklahoma, but they might have a trump card. West Virginia had a good nonconference game against N.C. State canceled. If a debate comes down to, say, one-loss West Virginia and a one-loss Washington State team, that fact can possibly sway the committee to give a small benefit of the doubt on SOS for West Virginia. Other than that, the Mountaineers are rooting for the same thing that Oklahoma is.

The selection committee did not punish the Cougars for their nonconference schedule. I would not have confidence in that lasting, though. The Cougars’ two FBS opponents (neither one a Power 5 team) are a combined 4-13 right now. If the Cougars have a close resume with someone else, that will be punished. They need the same scenario as Oklahoma does, but they also need a two-loss Big 12 champion–and they should prefer that champion not be Texas. It would also help, a lot, if Stanford can win out and end up ranked at 9-3. Oregon winning out would be a major help as well. If both of those happen–and if Utah finishes 9-4–the Cougars could end the year with four ranked wins. Maybe that would be enough to outweigh the nonconference schedule and stay ahead of top two-loss teams.

Needs a lot of help

I’m going to make one thing clear before I start this section. Unless noted otherwise, every team in here wants Alabama and Clemson to win out. Yes, it lowers the number of available slots. But it takes a two-bid SEC and ACC off the table, which will be incredibly helpful.

First of all, the Nittany Lions need to win the Big Ten. It’s not impossible, but it’s not likely, either. Penn State needs to win out, and then it needs either Ohio State to lose to both Maryland and Michigan State before beating Michigan; or for Michigan to lose to Rutgers or Indiana before beating Ohio State. If that comes to pass, though, then Penn State is not in an awful position. The Nittany Lions should be ahead of any two-loss Big 12 or Pac 12 champion, so they only need Oklahoma, west Virginia, and Washington State to lose another game. If that doesn’t happen, they’ll still be okay if Notre Dame loses two of its last four games.

Iowa is in a similar boat as Penn State. The Hawkeyes need to win out and win the Big Ten West in the process. That’s not as crazy as it seems. If the Hawkeyes win out, then all they need is for Wisconsin to lose one game–and the Badgers play road games against Penn State and Purdue back-to-back. After that, Iowa needs the same as Penn State. The Hawkeyes have a good resume. They would also prefer if West Virginia wins the Big 12, given their comparative results against Iowa State. (If we’re being honest, they’d most prefer that Iowa State win out and win the Big 12.)

The 35-step video shown above was more or less accurate. Well, you can take out the step of Utah losing another game. That one isn’t needed. The Longhorns will have a far superior resume to the Utes if both win out. Texas needs one spot to open up. If Alabama and Clemson both win out, that means they need two of the three of the following to occur: Notre Dame loses twice (preferably to USC, who Texas easily defeated earlier this year); the Pac 12 has a two-loss champion; or the Big Ten has an entirely unacceptable champion (for example, if a team from the Big Ten West wins the conference championship game).

The Eagles are in an interesting pickle. They control their own ACC destiny. However, there is every reason to believe that an 11-1 Clemson team would remain ahead of them in the CFP hunt. So either they need Clemson to lose another of its final four games, or the Eagles need three of the following four to occur: Notre Dame loses twice (preferably to Syracuse, who Boston College plays the following week); the Pac 12 has a two-loss champion; the Big Ten has an entirely unpalatable champion; or the Big 12 has a two-loss champion – and preferably not Texas, whose collection of quality wins would rival Boston College’s resume.

Everything I said about Boston College applies here, with one addition. If Clemson wins this week against Louisville, Syracuse will be eliminated from the ACC Atlantic race and therefore from CFP contention. N.C. State, meanwhile, has lost to both Clemson and Syracuse, so the Wolfpack need even more ACC chaos (including Clemson losing its final three conference games) or they’re eliminated as well.

The Cavaliers control their own ACC Coastal destiny, but quality wins are very hard to find on this resume. If they want in the Playoff, they need Clemson to lose at least once before facing off in the ACC Championship Game. Either that, or they need the same four of five things as listed above for Boston College.

I honestly have no idea where to put UCF. The committee put the Knights at No. 12, which is far higher than their current resume warrants. If UCF wins out – and its best games, from a resume perspective, are still to come – it probably gets slotted somewhere in the middle of the “needs a lot of help” tier. Right now, UCF is ranked ahead of every two-loss P5 team except Florida. I don’t expect that to last, especially if two-loss teams start picking up better wins and/or winning conference champions. Would 12-0 UCF have a better resume than 11-2 Penn State, Iowa, or Texas? Not a chance. Would 12-0 UCF have a better resume than 11-2 Virginia? Almost certainly. Where exactly UCF fits in is anyone’s guess, but the Knights will be making some teams nervous if they’re still undefeated after the first Saturday in December.