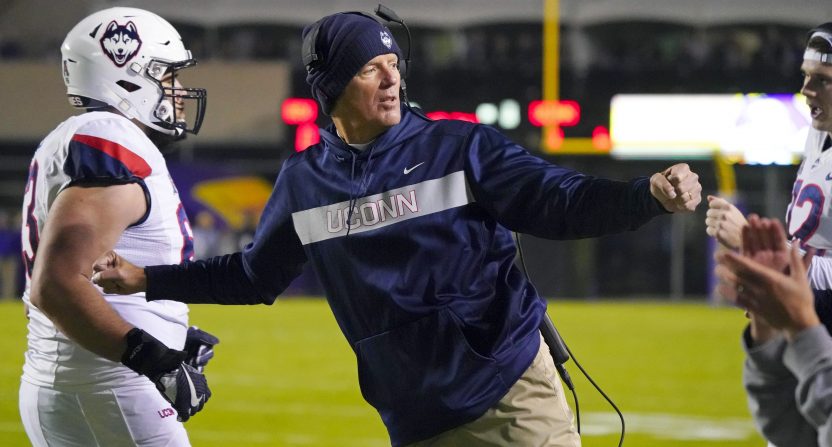 College football’s regular season is over and bowl season is just around the corner. As we all know, there are only four bowl games that matter: the three make up the College Football Playoff and, of course, TheComeback.com Bowl.

You’ll have to wait for the official announcement for the four playoff teams. But you don’t have a wait a second longer to learn about this: congratulations Connecticut (1-11) and Rutgers (1-11)! You’ve been invited to play in the third annual TheComeback.com Bowl. It’s college football’s premiere showcase event to determine the worst team in the FBS. The schools will meet Dec. 8 at H.A. Chapman Stadium in Tulsa, Oklahoma.

TheComeback.com Bowl is a celebration of the sheer absurdity of irrelevant bowl games. There are 40 bowl games and 78 available bowl slots (not counting the national title game). My God. There is no freaking way there are 78 teams worth watching. There are only 31 with three losses or less. Bowl season has become bloated, boring, and the sponsorships more preposterous.

TheComeback.com Bowl is a postseason game that helps your program.

Relegated to the FCS*

Amazingly, both schools look like they will keep their coaches – which probably has more to do with finances than anything else (Buyouts are expensive!).

In 1979, The New York Times wrote this about Storrs, Connecticut: “Students stuck in such an environment for four years are bound to become spiritually demoralized. It’s a no-fun place.” Yep. For years, UConn could at least brag about basketball. But the men’s program imploded, and the women haven’t won the national champion since all the way back in 2016. Now, the entire country is laughing at the ineptest football team we’ve seen in ages.

How bad were the Huskies? They went winless against the FBS. Their lone victory was a 56-49 decision over FCS Rhode Island. And the Rams finished 6-5. #Yikes.

Against FBS competition, all but two of UConn’s losses were by at least 12 points. If you’re a glass-half type, you could point out that the Huskies hung tough with then-No.21 South Florida before folding 38-30. That was improvement after they opened the season by getting vaporized at home against then-No.21 Central Florida 56-17 and following that up with a 62-7 beatdown at then-No.20 Boise State.

You can’t hide a bad defense. UConn was historically terrible. The Huskies set the FBS record by allowing 50.4 points per game and 617.4 total yards per game.

UConn’s football team allowed an average of 50.4 points per game this season.

The man in charge of this disaster is Randy Edsall. It’s still early. We’ve only completed Year 2 of Edsall 2.0. But he’s 4-20 in his second stint in Storrs. Edsall is best known for guiding the Huskies from the FCS to the FBS, coaching there from 1999-2010. He did a laudable job, getting a fledgling program to five bowl games, winning two. Edsall left for Maryland where he struggled before being fired. UConn hired him again in 2017. Despite his previous success there, it was considered a rushed and bizarre marriage.

Now, UConn appears stuck with Edsall for at least one more season. Firing a coach after two seasons is problematic, especially at a basketball-first school without any significant football tradition. Even impossibly handsome Bob Diaco got three years. Edsall has gone with a youth movement, especially on defense.

UConn will enter TheComeback.com Bowl on a 9-game losing streak.

#Ugh. We’ve seen this movie before and there are snuff films with happier endings. Coach Chris Asher looks like he’s reading a prepared statement in a hostage video.

To no one’s surprise this is Rutgers’ second appearance in TheComeback.com Bowl. It was invited for the inaugural 2016 game after going 2-10. The program appeared to be on a slight uptick last year (4-8!). But Rutgers is gonna Rutgers. It went 0-9 in the Big Ten for the second time in three seasons. The move to the Big Ten was supposed to add prestige. Instead, it’s been a money pit.

Rutgers is running a $35.4 million deficit and there are serious doubt it will get into the black when it receives its full-share distribution from the Big Ten in the next decade.

That sums up Rutgers. What else do you expect from a school whose most notable moments in recent athletics history are disgraced former bullying basketball coach Mike Rice and the expensive mistake hiring and firing of accused bully Julie Hermann as athletic director?

Doesn't get more #Rutgers football than this. pic.twitter.com/LPNuQuklq3

The most interesting stories about Rutgers football? Players accused of credit card fraud and murder.

Ash is 7-29 at Rutgers but his $10 million buyout will keep him employed. But is it really his fault? Rutgers has been a terrible fit in the Big Ten. Perhaps things will get better in 2020-21 when it receives a full share of the league money. But there is no going back.

There you have it. UConn vs. Rutgers in a battle of former Big East football teams. Feel the excitement! Remember, admission and parking are free at TheComeback.com Bowl. As a bonus, one lucky fan will get to participate in the game! That’s right. For one play, you’ll have your choice of being a long snapper or punter for either team*.

*DISCLAIMER: Participant is aware of and understands the risk of injury. Risks range from minor injuries such as scratches, bruises and sprains to major injuries such as loss of sight, broken bones, joint, ligament, cartilage, or back injuries, concussions and heart attacks to catastrophic injuries including paralysis and death.