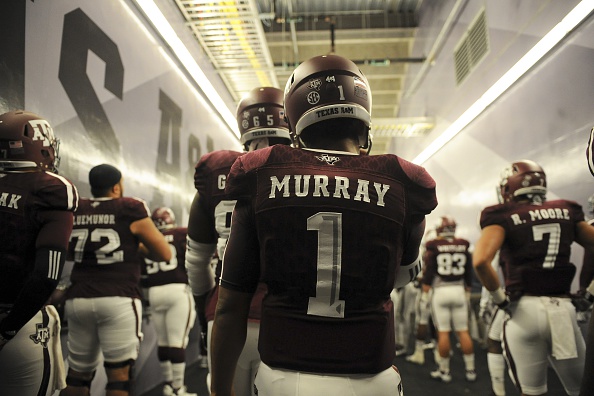 There is no doubt Johnny Manziel had a tremendous impact on the state of Texas A&M football. Step foot in the newly renovated Kyle Field and football facility, and Manziel’s presence is everywhere you look. The recognition is well deserved, as Manziel’s Heisman Trophy season ushered in a glimmer of hope for future success in the SEC under the rising head coaching profile of Kevin Sumlin. Quarterbacks want to go to Texas A&M with the hope of being the next Manziel, but Texas A&M has not been able to see any young passers come in and shine as quickly as Manziel did, and now those talented quarterbacks are looking for playing opportunities elsewhere.

Per multiple sources, Kyler Murray's intention as of one hour ago and following a meeting with Kevin Sumlin was to transfer from A&M

Since that time, I've been told the Aggies have been in the process of attempting to change Murray's mind and keep him in College Station

This transfer news alone is not to be too surprising. This is, after all, transfer season in college football. What is surprising is the news comes not all that long after Kyle Allen decided to transfer from Texas A&M less than a week ago. That is two five-star quarterbacks in Texas A&M’s two most recent recruiting classes to opt out on their own. Murray was a five-star recruit according to the 247 Sports composite rankings in the Class of 2015, while Allen was a five-star prize according to the same ranking system the previous year in 2014.

The plot thickens just a little bit more when you remember Texas A&M saw yet another four-star quarterback recruit transfer out of the program a year ago. Kenny Hill signed up with the Aggies in the Class of 2013 and was thought to be the successor to Manziel. Hill’s start was a wild one once he took over the offense last season, but he fizzled along the way and lost his job to Allen. Allen got off to a decent start in 2015, only to lose his job to Murray. It has been a brutal circle of life for Texas A&M quarterbacks, which only points fingers on head coach Kevin Sumlin.

Sumlin is the second highest-paid coach in the SEC behind Alabama’s Nick Saban. Getting $5 million a year, Texas A&M should be demanding some answers with the state of the program with quarterback after quarterback tapping out over the past year. Quite simply, it is not a good look. Sumlin has shown he is able to recruit with the best of them, and the growth of the Texas A&M program has benefitted from a transition to the SEC and increased support under Sumlin. What is still lacking though are the results on the field. Texas A&M is good, but a $5 million coach should be closer to great, and should also be able to keep at least one of this three highly-rated quarterbacks to stick around for more than one year.

Maybe this is a flukish sequence of events in College Station, or maybe Sumlin still has some work to do to prove worthy of the rich paycheck he receives from the university.