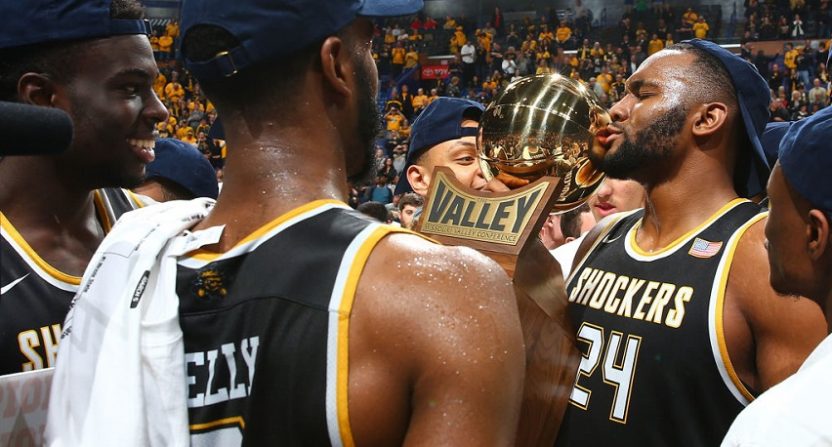 On Friday, the Wichita State Shockers were unanimously approved to join the American Athletic Conference as a non-football member and the league’s 12th basketball program.

The news, which had been talked up publicly for nearly a month, was not all that surprising. However, it does present its own set of challenges — both for WSU, as well as its new conference-mates.

Since splitting from the Big East in 2013, the American has seen a diminishing number of NCAA Tournament credits (awarded for each game a conference participates in) head its way. That first season, 2014, saw the league take home 11 credits — largely on the strength of UConn’s run to a surprise championship, as well as Louisville’s only season in the conference. In the three years after, the AAC’s total has only come to 11 total. The Shockers have earned seven on their own over the same stretch.

Those credits don’t carry over with them, but it’s still a testament to the quality of program the American will bring aboard. Wichita State has won 25 games or more in each of the last seven years. No other team in the league can say the same — even the current flag-bearers UConn, Cincinnati and SMU.

The main pushbacks over WSU are that they’re a basketball-focused addition in a football-driven college athletics environment. And that by adding another dot on the map in Kansas (of all places), the conference continues to stretch its borders to uncomfortably wide lengths — from Connecticut to Florida to Texas, and now Wichita’s home state as well.

For Wichita State, there is no pushback on their part. Their long-time home, the Missouri Valley Conference, served them well. The Shockers made it to two Final Fours (1965, 2013) in the league, won four conference tournaments and made the NCAA Tournament 14 times. But recent success started to reveal the program was outgrowing the MVC — or at least the lack of respect the conference was given by the tournament’s seeding committee.

In 2013, a 26-8 WSU team with a top-20 Ken Pom rating was given a No. 9 seed and ended up making it to the Final Four anyway. The 2014 team went unbeaten in the regular season and received a top seed — but had to face eventual national runner-up Kentucky in round two. They were top-20 in Ken Pom again in both 2015 and 2016, but were seeded seventh and 11th (in the First Four, no less), respectively.

This past season, they were a top-10 team according to the advanced metric, but received a 10-seed and a second-round matchup with Kentucky.

Fed up with the struggle for respect, they were clearly ready to move on to a larger conference and the chance to be rewarded a bit more for consistently great regular seasons.

But can they achieve that exact same success in the American starting next year? Recent history says perhaps not — at least not right away.

Since the start of the 2013-14 basketball season, 60 programs have changed conferences (not including the Big East/AAC holdovers on either side of that break-up). Of those, just 19 improved their year-over-year win total. Just eight made the NCAA Tournament in their first season competing in the new league. And only 18 have made the NCAA Tournament at all since the move. The Syracuse Orange (Big East to the ACC) are the only one of those squads to make the Final Four since changing conferences in that stretch.

There are some other factors in Wichita State’s favor, however, if you look at the numbers a bit closer.

While there was a ton of conference movement in the time frame, a lot of it was a trickle-down effect as a result of the changes made by power conferences and the high mid-major leagues. If we limit the group to the larger and more successful conferences (Power Five, plus AAC, Big East and Atlantic 10), that’s just 17 schools total, instead of 60. Of those, five — East Carolina, Houston, Rutgers, Tulane and UCF — have failed to make the NCAA Tournament in the time since switching conferences.

Four of those schools are in Wichita State’s new home, the American. But Memphis, SMU, Temple and Tulsa have also made the tournament since arriving in the conference. Of the three holdovers from the old Big East days, UConn and Cincinnati have made the NCAAs since the AAC’s founding, while USF has not.

Also helping out the Shockers is the fact that they’re reasonably better than those other teams that joined the American, including the ones that have made the NCAA Tournament recently. Over the last four years, Wichita State’s average Ken Pom ranking is 10. The next best figure in the conference is SMU’s average of 21.

The other new additions are a far cry from both of those figures. Memphis’s four-year average is 74.75, but that’s also boosted by being ranked 36th in 2014 (and no better than 75th since). Tulsa’s next at 94, and the rest all have averages above 100.

Wichita State’s bringing back virtually everybody from a 31-5 team, which should also help them defy the averages of many of these other programs that switched conferences. The 2017-18 season is a crucial one for the American too, as the league’s 19 credits from 2013 finally run out — meaning a whole lot less payouts going forward. Being able to bank on the Shockers is a must for the AAC to continue inhabiting the space right below the power conferences.

It’s also a must for the Shockers, who could use a bit of extra income to offset the increased travel costs of their new home.

The future’s uncertain for WSU and the AAC. But if nothing else, that future’s also different — which is something both parties probably needed at this point.