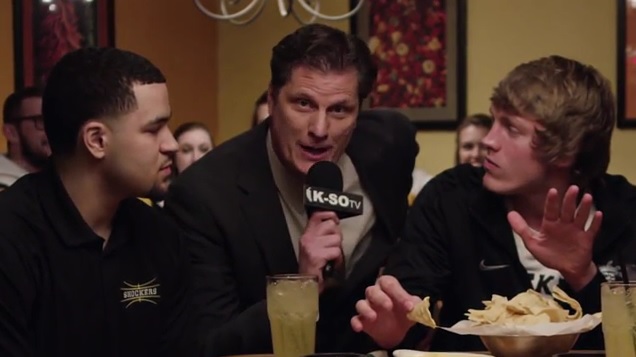 Wichita State basketball has never seen the sustained heights of recent years, and a trio of seniors in 2015-16 nearly finished off a remarkable career with an even more remarkable run as their last stand as college basketball players.

Things didn’t exactly end as the Shockers or head coach Gregg Marshall would’ve liked to have seen. However, for the trio of Ron Baker, Fred VanVleet, and Evan Wessel, there isn’t a better time in the world to capitalize on their names.

After finishing up their eligibility, the trio have taken to filming a local commercial for Carlos O’Kelly’s, a restaurant chain in Wichita.

Being a local celebrity isn’t exactly a new thing for college football or basketball players. In fact, it kind of is “the thing” that happens to most when going out and doing the things normal college kids do.

However, it is rare to see three players be able to cash in on that local celebrity so quickly after their eligibility is up. But, according to the Kansas.com interview, the company has had this in the works for awhile now.

Dave Phillips, Carlos O’ Kelly’s director of restaurant marketing, said he had invited the seniors to film spots for the annual Our Daily Bread Food Pantry fundraiser that the restaurant airs during the NCAA tournament. The trio had agreed, like their coach, Gregg Marshall, to help out with the campaign.

As long as they were there, Phillips said, he wondered if they’d like a paid gig, too.

“We’ve had our eyes on them for a long time,” he said. “The second their eligibility was up, we were on the phone with Gregg’s assistant and asked them permission to talk with these guys.”

The trio have starred in two commercials that have been released to date.

The first ad features officials taking forever to look into a case of “double-dipping.”

Then there is this one, with Ron Baker bagging on the “overbearing” floor general, VanVleet.

What the exact compensation was is yet to be revealed, nor is how long it took this trio to get these two commercials right. But hey, good for them, finally getting to make some money off of their names and images after years on the national radar.