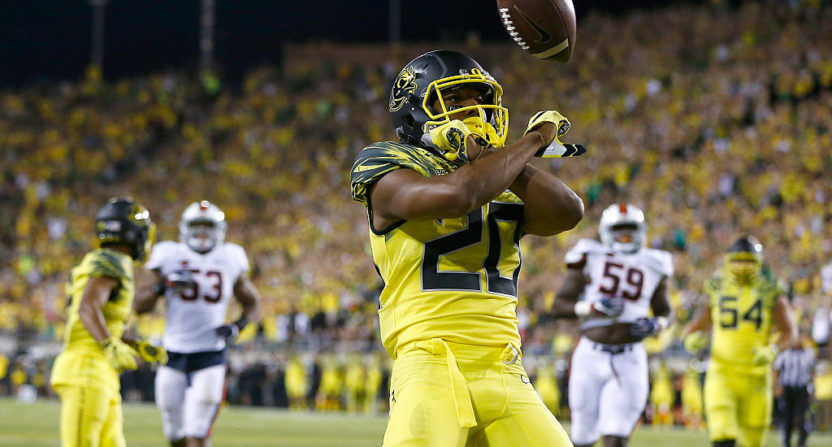 As the Houston region continues to recover from the impact of Hurricane Harvey, Hurricane Irma appears to be heading to the coast of Florida to cause problems for some sporting events this weekend. In the opposite corner of the country, there are other environmental concerns that could weigh on college football this weekend.

Wildfires breaking out across the state of Oregon have put the air quality in danger for anyone in the region as smoke fills the air. With Pac-12 members Oregon and Oregon State scheduled to play home games this weekend (against Nebraska and Minnesota, respectively), the Pac-12 is monitoring the situation closely in case adjustments need to be made for the health of the players and fans.

The games are still days away, but wildfires can stick around long enough to cause serious problems in the air. Moving the games from the Pac-12 venues would be tricky, and may be unprecedented. However, NAIA school Southern Oregon moved their season opener against Eastern Oregon to a neutral field this past weekend. The game was played southwest of Portland at Sherwood High School to get away from the health hazards.

Moving a pair of NAIA schools to a high school for 2,000 fans is one thing. Doing so for a pair of Pac-12 schools is quite a different challenge, especially with two Big Ten schools flying in for the game. We will see just how the Pac-12 handles this unique situation, but decisions of this capacity need to be made as soon as possible. Just like last week’s decision to transport a game between BYU and LSU from Houston to New Orleans, any alternate plans need time to accommodate as far as venue, staff, and security is concerned.

Scratching the games entirely is not the ideal alternative, as it would ultimately cost all four schools a game that could come back to haunt them should bowl eligibility be on the line at the end of the season (although exemptions could be made by the NCAA if we get to that point). Rescheduling could be a nightmare too if any of the four teams are invovled in their respective conference championship games (championship weekend would likely be the best possible time for a makeup game on short notice).

For now, the safety and health of the players and fans must take preference in any decision made by Oregon, Oregon State, and the Pac-12 (and Big Ten). Hopefully the air magically clears up in time, but that may not be the case.