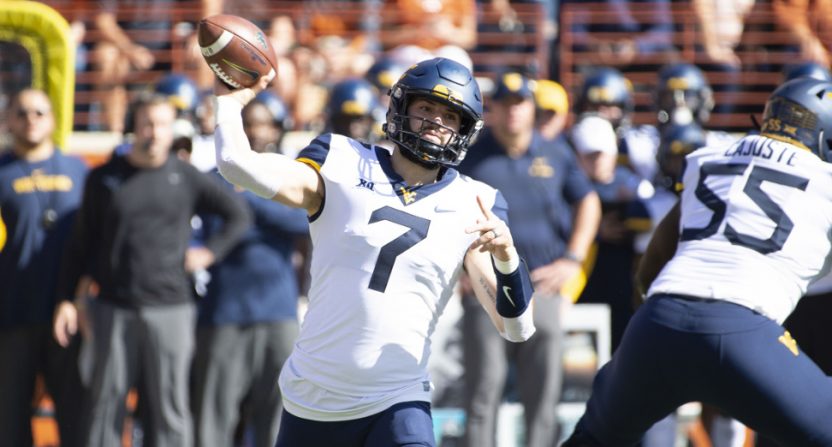 West Virginia and Texas entered Week 10 tied for the best record in Big 12 play with identical 4-1 records, with Oklahoma also in that three-way tie. With two spots available for the Big 12 championship game to the top two teams in the standings, Saturday’s meeting in Austin between the Longhorns and Mountaineers carried a great amount of significance. And West Virginia’s eventual 42-41 win was every bit a taste of what we should hope to see the rest of the year as the Big 12 race comes around the final corner of the regular season on its path to Arlington, Texas for the Big 12 championship game.

Will Grier and the Mountaineers were engaged in a back-and-forth game with Sam Ehlinger and the Longhorns all afternoon long, and this one went down to the wire, with West Virginia’s top Heisman candidate in years delivering in the clutch in the final minute of the game with a long touchdown pass and a successful run for a two-point conversion for the  win. How we got there was a tale best told by none other than Fox announcer Gus Johnson, as seen in the clips below.

The fourth quarter began with Texas leading West Virginia 31-27. A 38-yard field goal pushed the lead to 34-27 approaching the midway point of the fourth quarter, which was plenty of time for the crazy ending about to ensue. Martell Pettaway tied the game at 34-34 with a 13-yard touchdown run on the ensuing possession, and we were off to the races.

With a little over two and a half minutes to go in a tied game, 34-34, Sam Ehlinger completed a 48-yard touchdown strike to Devin Duvernay to regain the lead, although there was still plenty of time left to play.

Grier and the Mountaineers moved right down the field on the next possession, quickly moving to midfield in four plays, but time was ticking away. With precious seconds coming off the clock following a five-yard gain by Pettaway for a first down at the Texas 33-yard line, it appeared Grier was under some slight confusion at the line trying to get the play set. It did not matter, however, as Grier heaved a 33-yard touchdown to Gary Jennings Jr.s to bring West Virginia within one with 16 seconds to play.

Then it was decision time for West Virginia head coach Dana Holgorsen. Kick the extra point and take your chances in a likely overtime situation, or try grabbing the win now? The choice here was clear; give your Heisman Trophy candidate quarterback a chance to win this thing and go home. With a timeout to spare, Texas head coach Tom Herman was able to call a late timeout to wipe off a mismatch that would have led to a game-winning two-point conversion pass from Grier.

After the timeout, Grier took care of things himself.

After holding off a last-ditch effort desperation play by Texas on the final play of the game, West Virginia ended their day sitting in first place in the Big 12, while Texas took a step back in the Big 12 race with their second straight loss in conference play in as many weeks. Perhaps as expected, emotions carried over a bit after the game as the dust settled on the final score.

Texas players are pissed WVU is celebrating on the midfield logo. pic.twitter.com/J0w7OL1XCk

West Virginia has one of the most challenging November schedules in the country, if not just the Big 12. Getting the month started with a road win at Texas is critical, as the Mountaineers now own head-to-head tiebreakers against Texas and Texas Tech. The win over Texas also keeps West Virginia ahead of Iowa State, who the Mountaineers would lose a head-to-head tiebreaker with given the Cyclones’ victory in the Oct. 13 clash between the schools. With Oklahoma lined up at the end of the regular season in Morgantown, West Virginia must focus on their next two games first before looking ahead to a possible Big 12 championship shot. Next up for West Virginia will be TCU at home, followed by a road trip to Oklahoma State.

At 5-1, West Virginia sits in a good spot in the Big 12 title hunt. Texas is now currently sitting on the outside as the first team out despite having a victory over Oklahoma, because the Sooners currently have one fewer loss than Texas in Big 12 play. As it turns out, though, this game could still be a preview of the Big 12 championship game. If Texas and Oklahoma end the year with the same conference record (which could happen if West Virginia lends a helping hand at the end of the regular season), then Texas would get the nod thanks to their victory over the Sooners in the Red River Rivalry earlier this season.

Saturday was a tough loss for Texas, but the Longhorns are far from out of the Big 12 race. They’ll have to beat Texas Tech next week to keep that option on the table, though, most likely.

As for West Virginia, their best season since joining the Big 12 continues to roll along.