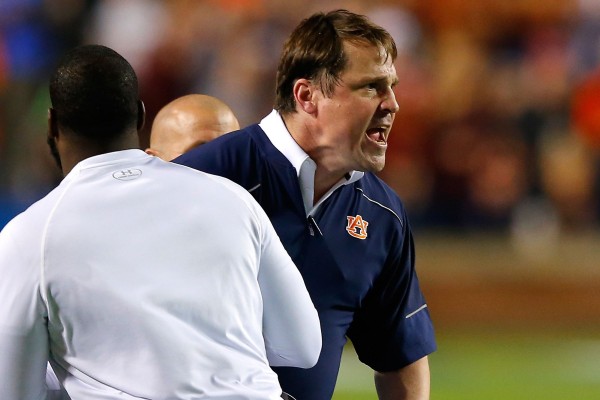 In the coming days, college football reporters will sift through the drama which unfolded Saturday, as University of Arizona athletic director Greg Byrne didn’t merely say that Rich Rodriguez would remain his program’s football coach:

Great news! @CoachRodAZ did not commit to the offer from S. Carolina. He's an Arizona Wildcat. #BearDown

It is currently a point of dispute as to whether or not South Carolina made an offer to Rodriguez, only for Rich Rod to reject it.

What’s not in dispute is that Will Muschamp will be South Carolina’s next head football coach.

Muschamp it is, then. The optics are not great, unless you’re at Clemson or any other SEC East program (especially Florida):

Speaking of Florida, the Gators offer the perfect place to begin this assessment of South Carolina’s very curious move.

In 2002, Stephen Orr Spurrier — the college football icon who had not yet failed in the NFL, having established his name and reputation over the course of 12 dazzling seasons in Gainesville — abruptly left Florida to scratch the itch of professional football. Florida athletic director Jeremy Foley — who has accumulated a hit-and-miss track record during his lengthy tenure — eventually found Urban Meyer, and seems to have hit another home run with Jim McElwain. However, Foley’s scramble in the aftermath of Spurrier’s move to the Washington Redskins was to hire an excitable and fast-talking uber-recruiter named Ron Zook.

It did not work out well.

A few years later, when Meyer burned out, Foley handed the keys of his program over to Muschamp, who is basically a darker and angrier version of Zook: all energy and passion, extremely competent on the recruiting trail… and not possessing a single living clue of how to create a good offense.

Say this about Muschamp: He deserved his shot at Florida in 2011. He had waited for many years to take over a Cadillac program in college football. He was Mack Brown’s coach-in-waiting at Texas, but rightly grew tired of waiting. Brown clearly didn’t want to let go of that job. Muschamp had presided over strong defenses at multiple SEC schools. He paid his dues the way Kirby Smart did. The longtime defensive coordinator for Nick Saban has guided Alabama into yet another College Football Playoff after another SEC championship. He will be Georgia’s next head coach once his playoff tour with Bama is done.

However, this time is different. If Florida and Foley were reasonable in giving Muschamp a (Mus-)chance, South Carolina is offering a second chance… based on a lot of hope and very little evidence.

It’s true that an injury to Carl Lawson — a stud pass rusher and an elite defensive player in general — limited the capabilities of Auburn’s defense in 2015. Yet, Muschamp truly struggled to find answers for much of the season. Injuries being a central part of football life, coaches have to find ways to work around limitations. Men such as Brian Kelly, Art Briles, Gary Patterson, Mark Dantonio, Jimbo Fisher, and other stars in the profession manage to do this with appreciable regularity. Muschamp, in his coordinator’s role at Auburn this year, could not. It wasn’t one of his finer seasons, and the blow-up in the Iron Bowl — which proved to be a pivotal moment in leveraging field position for Alabama, en route to a valuable field goal in a close game — underscored Muschamp’s decline in performance.

Muschamp is Ron Zook, replacing Steve Spurrier all over again… only this time, the successor to the Head Ball Coach has already marked himself as a failure. If he succeeds in South Carolina, it will represent a remarkable turnaround, one of the more improbable coaching resurrections in modern college football.

The folks in Columbia, South Carolina will tell you that their university should be referred to as “USC,” and that the Gamecocks represent “the real USC,” not the University of Southern California. Whatever you might think or feel about that ultimately trivial debate, it can be said that the Southern USC has followed the path carved out by the Western USC in Los Angeles.

One USC hired a couple of head coaches who “failed upward.” The other USC — the one in the SEC — has decided to do the same.

Lane Kiffin had done nothing as a head coach — with the Oakland Raiders or the Tennessee Volunteers — to recommend him for the USC job in 2010, but the Trojans and former athletic director Mike Garrett brought him aboard. You would have thought that Rhodes Scholar Pat Haden would have learned the lesson, especially after sacking Haden midway through the 2013 season. However, Haden followed the Garrett template by hiring Steve Sarkisian from the University of Washington, even though Sark was a beloved head coach in the eyes of arch-rival fans from the University of Oregon. The Ducks have been thumping the Huskies for over a decade; they never wanted “Seven-Win Sark” to leave.

That’s how dubious the Sarkisian hire was for the Trojans at the time. It ended the way everyone (except Haden) expected it would. “Failing upward” is not a good way for coaches to get jobs; it’s a terrible way for athletic directors to give them.

South Carolina and Ray Tanner did not have much of a plan if Muschamp figured this prominently in the Gamecocks’ strategic architecture. However, let’s give Tanner this: If he has emphasized a particular offensive coordinator, and if he has told Muschamp to stay as far away as possible from the daily supervision of the offense, such that a highly-paid and fully-empowered offensive coordinator could become — in essence — a second head coach with the ability to shape the offense as he chooses, this could work out.

The problem: One highly doubts this structure — this balance of power — actually exists.

South Carolina has replaced Steve Spurrier the way Florida did nearly 14 years ago… only with a coach who has already stumbled and failed. If Muschamp is not territorial about the management of his offense, he could give the Gamecocks an Easter Sunday moment and a rise from the grave of SEC East misery.

The odds say, however, that this second chance for Muschamp will end no better than his first go-round in the SEC East. The Florida program Muschamp couldn’t turn around is now situated to be the ruler of that division for the next few years.