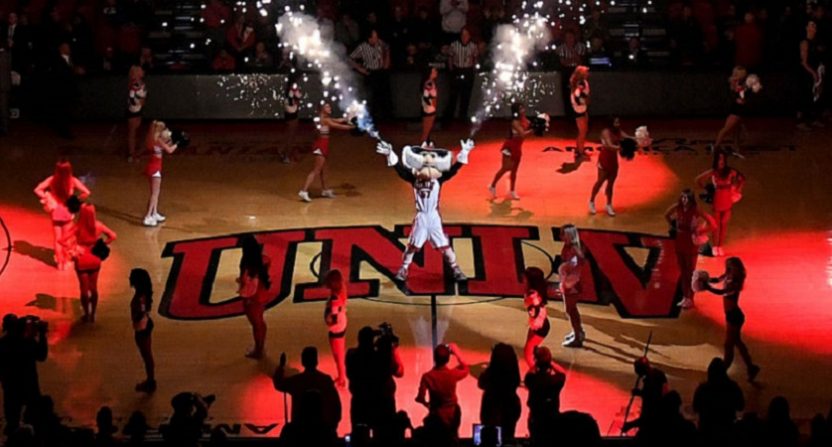 The Oakland Raiders are moving to Las Vegas. Overnight, “Sin City” goes from a gambling and tourism metropolis to a hub for major American sports. Along with the Raiders, the NHL’s new expansion team, the Vegas Golden Knights, will also call the city home.

There were concerns with having one team in Vegas, let alone two. Some of those – around gambling, drinking and Las Vegas’s other perceived vices – were antiquated. Others regarding population, local fans and the overall price of supporting major professional sports may have a bit more merit.

Las Vegas has had its own team for years, after all, in the UNLV Rebels. That program’s fate now faces a fork in the road.

College teams sharing cities with pro sports franchises is not a new phenomenon. In the Power Five conferences alone, 13 teams shared space in their immediate city with at least one pro team. Several more were within a quick drive of a pro team. Some, like Pittsburgh and USC, even share space with the pros.

But in the Mountain West Conference, UNLV isn’t the beneficiary of huge television revenues, bowl payouts and a hefty supply of NCAA Tournament credits. Their situation, unfortunately, is much more similar to schools like Charlotte, Georgia State, Buffalo and San Diego State than it is to that of college sports’ ruling class. Even non-FBS programs like Georgetown, Villanova, Butler, DePaul, Marquette and Xavier have benefits UNLV can’t claim. They’re all private schools in the Big East with history, tradition and TV dollars.

So what happens next for the Rebels?

Well, for football, this yields some positives, for sure. UNLV has been looking for an upgrade on their current home, Sam Boyd Stadium (capacity: 40,000), and the opportunity to share a new state-of-the-art venue with an NFL team is exactly what the program needed. The program knows it too. Said UNLV Athletic Director Tina Kunzer-Murphy:

“We are very excited to welcome the Raiders to our great city of Las Vegas. Our community is on the rise and that has clearly been recognized by the NFL owners with today’s vote. We can’t wait for the day our UNLV football program has a new home, sharing the new world-class stadium with the Las Vegas Raiders. What a great day for the NFL, our city and our university.”

Obviously, the new venue is a much greater upgrade than the simple Las Vegas-themed branding the team bought into more heavily in 2015 when Tony Sanchez was hired as head coach. While going all-in on the city’s general motif may have created a greater link between the team and its surroundings, the wins have been slow to uptick. UNLV has gone 3-9 and then 4-8 since the coaching change.

Attendance hasn’t responded accordingly yet. After a 6,000-fan jump up to about 21,000 in 2015, per-game attendance dipped back down below 19,000 last season. It’s a tough sell to get fans to come out for a team that’s made just four bowl appearances in its history (and just one since 2001).

On the basketball front, things are both historically better and potentially worse in the future.

The Runnin’ Rebels rose to prominence under Jerry Tarkanian in the late 1970s, then spent 1982 to 1991 on a stunning run of success that yielded three trips to the Final Four and one national championship (1990). UNLV found success following Tarkanian’s departure, but recently dipped into some mediocrity. That stretch of poor basketball has resulted in a sharp attendance decline – and that’s before the competition for fans’ eyeballs even comes to town.

Those newcomers to the neighborhood are where the real concern starts for UNLV, especially on the basketball front.

Win or lose, those pro teams will see early attendance boosts. New teams in a new city create excitement, and a chance to cultivate fan bases in a city that was dying for professional sports. Even in a down year, the appeal of tourism (Vegas is one of the world’s top vacation destinations) should drive attendance – especially from the glut of nearby cities. Fans from California, Arizona, Colorado and even Texas could make the trek without much hassle, filling seats even if locals won’t.

But would that flood of visiting fans and sponsorship dollars (already en route via recently built T-Mobile Arena) push local fans out and into the waiting arms of UNLV sports? Or would being a pro sports city simply price out Las Vegas residents altogether?

Median household income in the Vegas area was just under $50,000 in 2015, though the population had risen by nearly 150,000 in the 15-year stretch leading up to that year. City-data.com lists out a collection of other facts about the greater region’s population and income, all of which help tell the story of whether or not Vegas can support these teams.

The population growth is great, but those who can afford to attend events and buy season tickets are also in an older age bracket than a team (or teams) may want, with a heavy focus on those 45 years and up. There’s also a significant portion of the population making well below the amount necessary to purchase season tickets for any of the teams – the Raiders, Golden Knights, UNLV football or basketball. Only 11 percent or so of residents have a household income above $75,000 per year.

A rising tide could lift all boats in Las Vegas, but we’ll have to wait and see if that applies to the Rebels as well. The NFL and NHL will survive in the desert because they have the money to make sure of it. For UNLV, its financial situation is not such where it can make those guarantees. It’s a crucial point of inflection for the athletic program. A gamble by others that has UNLV all-in now, like it or not.