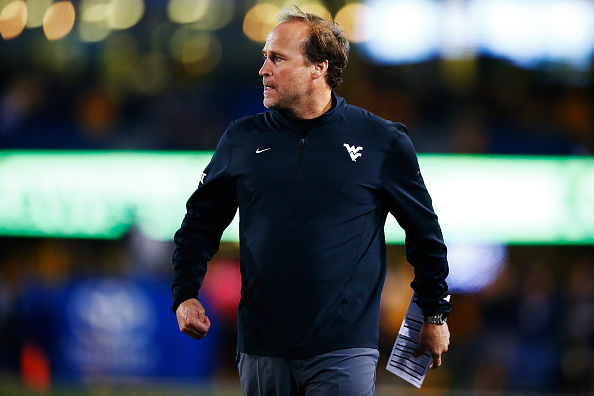 After finishing the regular season 7-5 for the second straight year, West Virginia is considering firing coach Dana Holgorsen, according to the Charleston Gazette-Mail.

Now, though, there’s a decision to be made: fire Holgorsen or retain the coach.

As of Monday evening, the decision had not been made. All of the principals — Gee, Lyons and Holgorsen — were in New York. The WVU basketball team is playing a high-profile game tonight at Madison Square Garden against Virginia. There are Big 12 meetings going on. There are College Football Hall of Fame ceremonies going on. Lyons is a speaker at a sports business clinic.

When reached Monday, Lyons said he had no comment on Holgorsen’s status. Reliable sources, however, have said the athletic director and coach have talked about the situation a couple times. Those discussions will continue in the coming days.

Holgorsen is 35-28 in five seasons at West Virginia, including 25-25 over the past four years. Before this recent slide, which is owed partly to switching from the Big East to the Big 12, West Virginia had won at least eight games in 10 consecutive seasons, the first nine of them under Holgorsen’s predecessors, Bill Stewart and Rich Rodriguez.

Before a season-ending loss to Kansas State, 2015 looked like a bounce-back year for West Virginia, with their only losses coming to ranked teams. But a 24-23 loss to the Wildcats dropped the Mountaineers to 7-5 and apparently landed Holgorsen on the hot seat.

West Virginia will play Arizona State on Jan. 2 in the Motel 6 Cactus Bowl.

Many Mountaineer fans and observers on Twitter voiced support for Holgorsen on Tuesday amid the news of his job being in danger.

I think Holgorsen has done a solid job making bowls in 3 of first 4 yrs in Big 12. Was always going to be a tough transition moving up.

No, WVU. I am a loyal fan, and let's please not fire Holgorsen. https://t.co/IXOB5Ul3ZF

If WV fires Holgorsen this year, this late, that's just dumb. Too many quality jobs came open this year plus who do you get better than him?

ok have fun with that RT @SBNationCFB: Dana Holgorsen is reportedly on hot seat at West Virginia (cont) https://t.co/Hnx46I9TCJ

Would be shocked if WVU parted ways with Holgorsen, would be a horrible move by the school, great news for the rest of the big 12.

Then again, maybe those Holgorsen supporters are just a vocal minority:

OK so I'm interested in feedback from WVU fans. Should Dana Holgorsen now be on the hot seat?