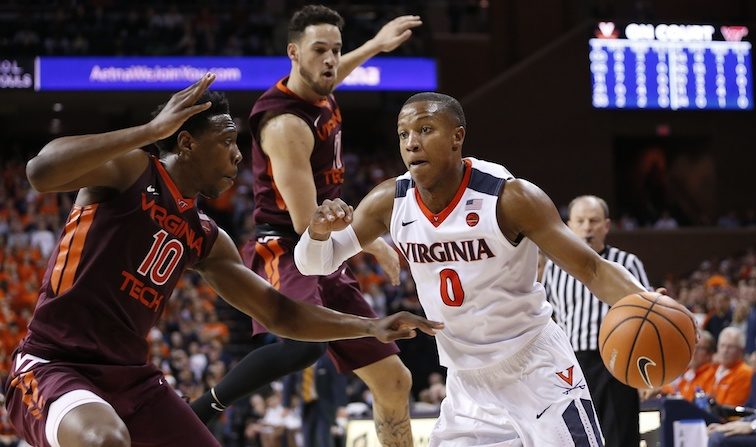 March Madness might be madder than ever. We’re a month away from the most glorious spectacle in sports. If the 2017-18 regular season is any indicator, we could have a tumultuous NCAA Tournament.

This past weekend, the NCAA recently released the current top 16 overall seeds. The four preliminary No. 1s are Virginia, Villanova, Xavier and Purdue, with Virginia as the top overall seed. The other teams in contention are No. 2 seeds Auburn, Kansas, Duke and Cincinnati. The rest of the top 16 are: No. 3s (Clemson, Texas Tech, Michigan State and North Carolina) and No. 4s (Tennessee, Ohio State, Arizona and Oklahoma).

A lot can – and usually does – happen between now and the end of the conference tournaments. The field could look vastly different from what we’ve seen so far because the overall arching theme of 2017-18 has been that there is no consensus dominant team. Heck, Virginia just lost at home in overtime to Virginia Tech.

Perhaps this is setting the stage for what would be the ultimate March Madness upset. Is this the year a No. 1 seed finally loses to a No. 16? Top seeds are 128-0 lifetime in that matchup. But a breakthrough has to come some time.

It’s not inconceivable that every team in the field could enter the NCAA Tournament with at least four losses – which would be only the second time that’s ever happened. (The last time was in 2016.) Every school has at least two defeats and only Virginia, Villanova and Cincinnati have fewer than three losses.

We live in a world where very little makes sense.

According to Ken Pomeroy, the biggest upset of this season was North Carolina losing at home to Wofford, 79-75. Wofford (17-9, 8-5) is the third-best team in the Southern Conference. Meanwhile, North Carolina (19-7, 8-5) is the best seven-loss team in America and could finish second in the ACC. And no one would be surprised if the defending national champion won the ACC Tournament.

That’s not the only result that will make you suspicious.

How do you explain Duke and Villanova both losing to St. John’s? The Red Storm’s Shamorie Ponds is a wonderful player, but that has to be the most perplexing eight-day stretch in recent NCAA memory. St. John’s, then a winless Big East team, upended Duke, the preseason No. 1, and then scored its first conference victory by stunning No. 1-ranked Villanova.

When you look at the preliminary eight top overall seeds, all have a loss to a team that is currently unranked (Cincinnati fell to then-No. 5 Florida in December, but the Gators aren’t ranked now) and some of the defeats defy explanation.

Look at Purdue. From Black Friday through Nov. 3, the Boilermakers won 19 in a row and looked like the most dominant force in the sport. Do you know who they lost to prior to that streak? Western Kentucky. The Hilltoppers are a good team and contending for an at-large bid, but this is a prime example of how one bad night on a neutral court could end your season.

Using Joe Lunardi’s Bracketology as a guide, these teams are in contention to be No. 16 seeds (factoring in the play-in games): Nicholls State, Savannah State, Harvard, Arkansas-Pine Bluff, Wagner, and UNC Asheville. Among that group, Wagner (18-7) is the highest-rated KenPom team at No. 147. On paper, none of these teams seem good enough to oust a No. 1 seed. Wagner lost to Missouri, 99-55, and Seton Hall, 89-68. Harvard looks intriguing because it played then-No. 7 Kentucky close, losing 79-70.

The NCAA Tournament is often about matchups and it will take the favorable matchup or a hot shooting night from 3-point range for an upset to happen. Another factor you have to consider is the tournament selection committee. One way an upset can happen is when the committee makes a seeding mistake.

Earlier this week, ESPN analyst Jay Bilas was critical of the preliminary seeding and blamed it on the committee’s reliance on the RPI.

“What is laughably absurd is that Michigan State was No. 11 overall of the 16 teams and that Oklahoma was included at all,” Bilas said on SportsCenter. “One of the big issues the committee has is this quadrant system that they’ve come up with. First of all, the quadrant system is based upon the RPI, which is a horribly flawed measure.”

Jason McCallum, a senior researcher for SportsCenter, came up with his own bracket, based on ESPN’s College Basketball Power and the Strength of Record. McCallum argues that Villanova, Virginia, Purdue and Cincinnati should be the No. 1 seeds. Michigan State, Gonzaga, Kansas and Duke are his No. 2s.

BRACKET METRICS: A month from Selection Sunday, here's what the current bracket would be if you used Strength of Record (most deserving) to determine the field of 68, and then BPI (best teams) to seed those 68 teams. Lines minimally adjusted for bracket rules about matchups. pic.twitter.com/usxZO8PDnv

One of the greatest upsets in tournament history was aided by what, in retrospect, looked like a seeding error. In 2016, No. 2 Michigan State was stunned by Middle Tennessee.

If the committee chooses a questionable No. 1 seed and matches it against a questionable No. 16 seed, then the conditions could be ripe for an upset. In a year when no team is dominant, there may not be much separation between the top eight schools.

You could see a scenario where a team like Auburn gets hot late to claim a No. 1 seed and then finds itself in a dogfight against an under-seeded No. 16. Does anyone trust a team like Texas Tech? Cincinnati has had past flameouts and is offensively challenged.

Or maybe this is all just wishful thinking.

The closest calls both came in the 1989 tournament. Top-seed Georgetown escaped No. 16 Princeton, 50-49, and No. 1 Oklahoma stormed back from a 15-point deficit to beat East Tennessee State.

According to Daniel Wilco of NCAA.com, average margin of victory since the field expanded is 24.86 points. Wilco also pointed out that only 15 games have been decided by less than 10 points and no game has been decided by one possession since 1996.