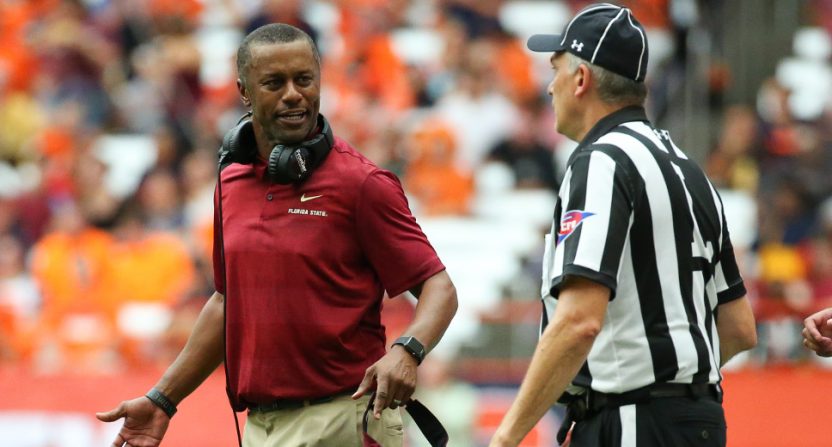 It would be difficult to imagine a start for Florida State with new head coach Willie Taggart that’s much worse than this. After getting rolled on the road by Syracuse Saturday by a score of 30-7, the unimaginable has become the unfortunate reality for the Seminoles.

In the first three weeks of the college football season, Florida State has:

Florida State is now 0-2 in ACC play and has been outscored by their conference opponents 54-10. And they don’t even play Clemson until late October. Strap your safety belt, folks, because Florida State is experiencing some serious turbulence under Taggart. But how much of the blame is to be put on Taggart?

Florida State played some poor football and was undisciplined all game long against Syracuse. The Seminoles let the clock run out by throwing and keeping the ball in the middle of the field instead of playing to the sidelines at the end of the first half. Florida State was flagged for 11 penalties for 90 yards. Losing to Syracuse isn’t exactly a call to be shamed, because Dino Babers has the Orange playing with some juice (they are 3-0, and it’s not a fluke), but the Seminoles were outgained by 200 yards and converted just one third down out of 14 conversion attempts. And they had some brutally-mocked OL play:

That’s your left tackle?! That?! pic.twitter.com/JzXi4XsTtB

Taggart has been the easy target for Florida State’s early season woes, which is fair. Head coaches are paid big bucks to win games, and Taggart’s 1-2 start is not doing much to provide any optimism for Florida State fans that he was the right choice to turn things around after a disappointing season that required the rescheduling of a game against Louisiana-Monroe just to try and become bowl eligible. This was not exactly the same situation as Jimbo Fisher had taking over for Bobby Bowden, but there are no excuses for things being this bad at the start for Taggart.

Could Taggert be fired before the end of his first season?

Defending Taggart has been tough to do after these first three weeks, but it is far from time to suggest Florida State should begin looking to hire a search firm to help find a new head coach. It’s good for some easy jokes, sure, but Taggart is going to get more than one year to get things going at Florida State. For starters, the school is not about to pay to get out of the Taggart deal so quickly. It would simply not be economical.

It would cost Florida State $21.25 million to get rid of Willie Taggart after this season, not counting whatever guaranteed money is owed to assistants.

That’s a price tag you just don’t take on after one season. If Florida State goes 0-12, that may be another discussion entirely, but I’m willing to bet they do win at least once this season. But already, the question is how many wins will this Florida State team manage to win? Will it be enough to go bowling? Florida State has to win six of these games in order to become bowl-eligible:

Oh boy. This could be an ugly year to follow Florida State. The way the first three weeks have gone, there may not be a ton of wins the rest of the year. But Taggart is going to be the head coach at Florida State in 2019 unless something absolutely crazy happens. And given his history as a head coach, Florida State will improve. Every program he has coached has improved over the course of his time there (Oregon is the lone exception to this rule).

Things should improve in Tallahassee, but it may not happen soon enough for Florida State fans.