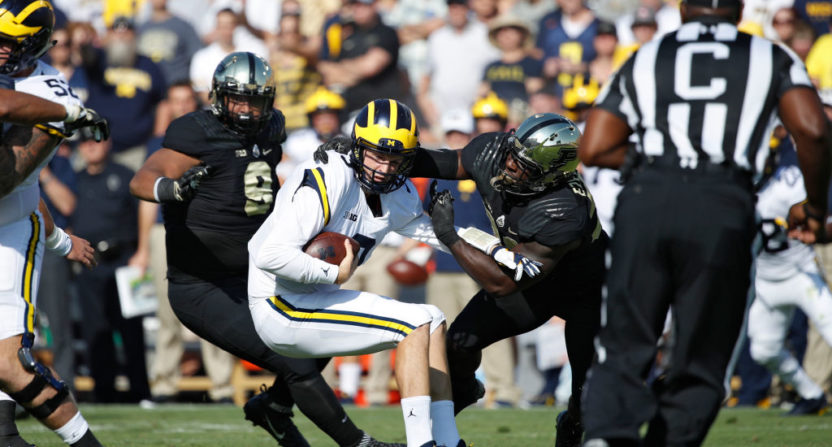 If athletic programs aren’t going to use their money to pay players directly, they should at least make their entire experience as stellar as possible. Medical facilities should be at the top of the list.

Five weeks ago, Michigan quarterback Wilton Speight suffered three fractured vertebrae in a win at Purdue. Coach Jim Harbaugh blasted Purdue’s medical facilities afterward for being antiquated. Now Speight’s parents, who joined their injured son at the student health clinic two blocks from Ross-Ade Stadium, have opened up on what happened, and it sounds like a nightmare.

Here’s how Bobby Speight, Wilton’s father, described the experience to The Detroit News:

“What an absolute train wreck.

“When that door opened, even in high school I had never been in a visiting locker room that bad. It was dark, dingy, dirty.”

At Michigan and some other programs, they have full X-ray capabilities at their stadium and give injured players a police escort to a hospital in emergency situations. At Purdue, they piled Speight, his family, his doctor and his trainer in a student-driven van and had to wait for barricades outside the stadium to be moved:

“We take off with no escort,” Bobby Speight said. “We can’t get through because there are barricades up and (the van driver is) directing people to move them.”

After a delay, Speight received his X-rays, but a transmission failure led to low-resolution images, which Michigan’s doctors didn’t feel comfortable using for a diagnosis for fear of missing a smaller fractures. They requested transportation to a hospital, and the Purdue staff allegedly remained incompetent:

Michigan’s team doctors decided Speight should be transported to a local hospital, but the Purdue officials didn’t know which hospital to send them to, Bobby Speight said.

Trinh requested a local EMS take the group. A volunteer rescue team was the only option available, as full-time EMS units were dispatched elsewhere, Speight said he was told.

It took 20 minutes for the volunteer rescue team to arrive, and there was a complete lack of urgency, according to Bobby Speight:

“At that point, Wilton says he has tingling in his legs and is in substantial pain. The EMT riding in the back of the ambulance asks us if we need an IV or vital monitoring and Trinh replied, ‘No, but we need him stable and immobile. This is a back injury.’ We stop at a light, and the Michigan doctor asks how long is it going to take, and (the EMT) said 30 to 45 minutes on game day.

“Our doctor asked him, ‘Couldn’t we please turn on the siren and make better time?’ And (the rescue squad member) said, ‘Don’t you get smart with me. You said this is a non-vital trip.’ Our doctor said, ‘I don’t care what I told you, this boy has tingling in his legs. Turn the siren on and go.’

In some respects, the NCAA and its schools treat players well, particularly at high-level programs like those in the Big Ten. First-class flights, luxurious hotels, top-notch practice facilities. Athletic programs remain “non-profits” not only through spending lots of cash on these amenities for players, but also by giving coaches insane bonuses and benefits. Iowa State coach Matt Campbell’s contract includes a $500,000 bonus for a 6-6 season. Kentucky coach Mark Stoops gets a $100,000 bonus for every additional SEC win after the first win. Iowa coach Kirk Ferentz gets 35 free hours per year on a private jet to use however he pleases.

Fortunately, Speight’s injury isn’t more serious. But that’s not an excuse for putting a player’s career and health in jeopardy, especially when the money to treat injured players better exists.