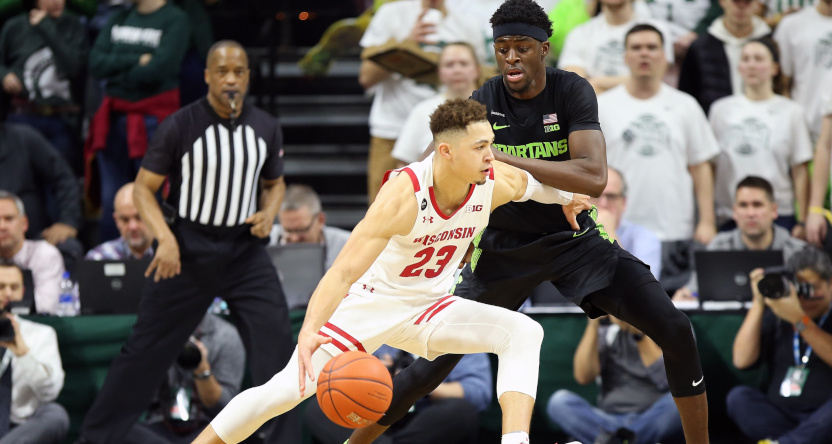 There’s a lot of controversy swirling around the Wisconsin Badgers’ men’s basketball program, but there are two clear facts; redshirt sophomore guard Kobe King (seen above against Michigan State’s Gabe Brown on Jan. 17) has announced he plans to transfer, and seventh-year strength and conditioning coach Erik Helland has announced he’s resigning. The correlation (if any) between those two stories is anything but clear, though, and there’s still plenty of fuzziness around the details on both stories. First, let’s examine the timeline here.

Last Wednesday (Jan. 29), King posted on Instagram that he intended to transfer, two days after he didn’t travel with the team to a game at Iowa. That appeared to take Wisconsin officials, including head coach Greg Gard, by surprise; King was the Badgers’ second-leading scorer this season. Here’s what King said in his Instagram post (which appears to have since been deleted, but is preserved by the Associated Press here):

“After talking with my family and friends I have decided that the best step for my future basketball aspirations, as well as my love for the game, is to immediately step away from the University of Wisconsin men’s basketball program. This has been a very tough decision for me … however, after spending almost three years in the Wisconsin program I have realized that this program is not the right fit for me as a player and person.”

“Being a Wisconsin kid my whole life, I always dreamed of being a Badgers and representing the state every game. I am grateful that I was able to get the opportunity to play for such a great university.”

King’s decision, and particularly its late-in-the-season timing, brought a fair bit of criticism. For example, Gard said in a statement “Being a student-athlete in the Wisconsin men’s basketball program is a special privilege and opportunity, and I’m disappointed that Kobe has chosen to leave, particularly at this point in time. But I respect his right to do what he feels is in his best interest. I wish Kobe all the best.” And NCAA analysts like Andy Katz offered criticisms of their own:

.@TheAndyKatz had a strong reaction to the news that Kobe King is leaving the @BadgerMBB program: pic.twitter.com/rr5q4Kmro9

However, there were some further twists ahead in the story. On Wednesday night, Jeff Potrykus of the Milwaukee Journal-Sentinel wrote a piece titled “UW officials investigating allegations of racial comment directed at former basketball player Kobe King.” Here are some key parts of that piece:

University of Wisconsin officials are investigating an allegation that a racial epithet was directed at Kobe King by a UW staffer.

The Journal Sentinel on Wednesday informed senior associate athletic director Justin Doherty, who oversees the men’s basketball program, it had learned of the allegations.

Doherty provided a statement to the Journal Sentinel during halftime of UW’s 70-52 Big Ten loss at Minnesota:

“There is absolutely no place in UW athletics for the type of behavior being alleged.”

On Thursday, Helland resigned. Here’s the statement UW put out around his resignation:

“UW Athletics administration was informed last weekend that Helland, while recounting a story from earlier in his NBA career, had used a racial epithet in the presence of multiple Wisconsin men’s basketball student-athletes.

“UW Athletics confirmed that assertion on Sunday. UW Athletics works to promote a safe and welcoming environment for its student-athletes and staff and the aforementioned language used does not align with the values of the athletic department, men’s basketball program or the university.”

And Helland himself spoke to Potrykus after this:

According to Helland, he was speaking with several members of the team on Jan. 3 in Columbus, Ohio, one day before UW faced Ohio State.

“I was sharing a story from my NBA career and was explaining the intensity of a particular athlete,” Helland said. “I quoted that individual and in doing so repeated a repugnant word. In no way were these my words and I clearly stated my disapproval.

From the beginning I owned what I said and made apologies to the student-athletes affected. I made a mistake in a moment of inattentiveness. For that, I have the deepest regret.”

Helland said rather than sharing the story with head coach Greg Gard, he apologized to the players involved and thought the matter was closed.

“I specifically addressed the student-athletes and we handled it as a group,” he said. “Everything was fine. … Apologies were accepted and everyone was doing just fine. …

“It really didn’t come back up until Kobe decided that he wanted to leave.”

Helland went on to say he heard after King’s decision to leave that news of that incident might be shared publicly, and he talked to Gard and administrators about it before Saturday’s game. He also went on to offer further apologies.

Update: Jim Polzin of the Wisconsin State Journal has more on this, including comments from King:

Reached on his cell phone Thursday, King said he wasn’t present when Helland used the epithet in front of three walk-ons, but his teammates told him about it.

King said he mentioned the January incident during a meeting with Doherty and UW associate athletic director for compliance Katie Smith last Friday.

The former Wisconsin Mr. Basketball and La Crosse Central standout had initiated the meeting with UW administrators so he could get his name in the transfer portal and begin talking to coaches from other programs. Over the course of that conversation, King said he was asked by Doherty and Smith if there were ways he thought UW could improve.

While King didn’t believe Helland was being malicious in his use of the racial epithet, he said he raised the issue so UW could help its staff members be more informed on controversial societal issues. However, King said he didn’t refer to Helland specifically at that time.

“To be honest, I didn’t want it to go public,” King said. “I like Coach E, he’s been good to me, I just thought it was concerning. It was awkward for me for a few days, it was uncomfortable to me.”

Still, even if King’s transfer decision wasn’t specifically because of Helland’s comments, those comments certainly are concerning, as Wisconsin’s response here shows. And some of the criticism of King for transfering don’t necessarily look great in retrospect with the emergence of this story about Helland and uncomfortable environments for players (even if some critics, like Katz, caveated that their criticisms were based on what was out there at the time). Maybe overall, this illustrates that there can frequently be more to a transfer than what’s initially discussed.