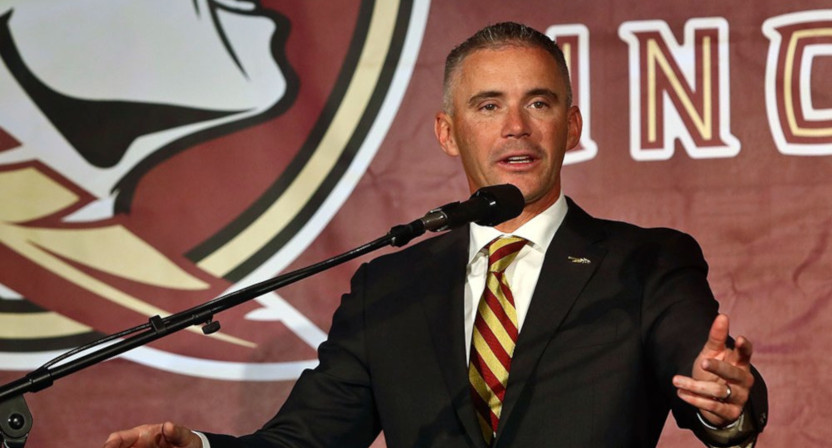 Feeling sorry for Florida State football is a hard sentence to write and even harder to imagine. For decades, the Seminoles mattered. Love ‘em or hate ‘em. They were a program that everyone paid attention to because they were often in the championship mix.

Now, Florida State (0-3) is drawing attention for the wrong reasons. The latest embarrassment was getting curb-stomped by Wake Forest, 35-14, during which they went scoreless in the second half.

That’s not only sad. It’s historic. The Seminoles haven’t been 0-3 since 1976. That was the first season under legendary coach Bobby Bowden, who passed away last month at the age of 91.

Mike Norvell is no Bobby Bowden. He might not even be Willie Taggart. Norvell, who is in his second season, has a win-loss record at Florida State of 3-9. Taggart was fired in the middle of his second season after going 9-12. If the Seminoles lose at home on Saturday to Louisville, they will be off to their worst start since going 1-10 in 1974.

“We’re learning some hard lessons,” Norvell said during his weekly press conference. “We’re having to go through some painful moments. It’s challenging. We are a young team.

Florida State fans didn’t expect an Atlantic Coast Conference title, but it was certainly reasonable to think the Seminoles would be better. Norvell was hired in December 2019 after putting together a terrific résumé at Memphis (38-15, including 12-1 in his final season). So far, Norvell looks worse than his predecessor.

It wasn’t that long ago that Florida State was a national champion. The 2013 Seminoles were the last winner of the title under the BCS National Championship Game format. The following season, they reached the inaugural College Football Playoff. But Jameis Winston and Jimbo Fisher don’t live in Tallahassee anymore.

“I swear, I feel like I’m watching the Willie Taggart movie, Part 2,” said Finebaum, via 247Sports. “I didn’t think, and I don’t think anyone thought we would. Because Mike Norvell has a really good reputation. Taggart did too. I thought he was pretty close to getting this program back, but when you start off like this, there’s nowhere to go. You’re a laughingstock, you’re a joke.”

ESPN’s Paul Finebaum on Florida State: “When you start off like this, there’s nowhere to go.” pic.twitter.com/88h2ozpY7v

When Florida State athletic director David Coburn pushed Taggart out the door, he justified the quick hook. “Frankly, 6-6 isn’t good enough,” he told reporters in November 2019, “and we didn’t see an advantage to waiting until the end.”

Well, what does Coburn think about being winless in September? Right now, one of the best arguments for keeping Norvell doesn’t inspire confidence: his buyout.

First, it’s highly unusual to fire a football coach after just two seasons. It’s even rarer to do it with back-to-back coaches. Instability wreaks havoc with recruiting, and assistant coaches and staffers don’t want to work in that environment.

Second, firing football coaches is expensive. Florida State is still paying Taggart, owing him $3.5 million a year through 2023. If the Seminoles dismiss Norvell this year, it would cost the program a $16 million buyout.

No matter how rich your university is, that’s a lot of money to be paying two guys who don’t work for you anymore. Even if wealthy donors pitch in. The best course of action might be riding out the Mike Norvell Experience.

The Jacksonville State radio call is everything we hoped it would be: pic.twitter.com/PQHxuKoiYg

The combined record of the teams Florida State has played this season is 8-1. The Seminoles opened the season with a 41-38 overtime home loss to then-No. 9 Notre Dame. They followed that up by a horrific last-second, 20-17 loss to Jacksonville State, a game they probably would have won if not for one of the worst defensive play-calls of the season.

And as bad as the Wake Forest loss looked, the outcome might have been different if not for six turnovers.

Florida State was picked to finish fourth in the ACC’s Atlantic Division. The program is still trying to build back the talent base that was thinned due to having three different head coaches over five years.

The Seminoles didn’t have one single player named to the 27-member 2021 All-ACC Preseason Football Team. They lost four players to the NFL Draft, including first-team All-ACC cornerback Asante Samuel, Jr. (Samuel was a second-round selection, No. 47 overall to the Los Angeles Chargers.)

The current Seminoles have some bright spots. Sophomore running back Jashaun Corbin is third in the ACC with 280 rushing yards and averaging 7.6 yards per carry. Senior defensive end Jermaine Johnson II is tied for the league lead in sacks with three.

But the biggest reason for optimism is next year’s top 10 recruiting class. The most heralded player is cornerback/wide receiver Travis Hunter, the No. 1 overall college football recruit by Sports Illustrated for the class of 2022. Hunter recently reaffirmed his commitment despite Florida State’s 0-3 start.

The combination of an expensive buyout and a standout recruiting class might save Norvell. But he needs to start winning games.