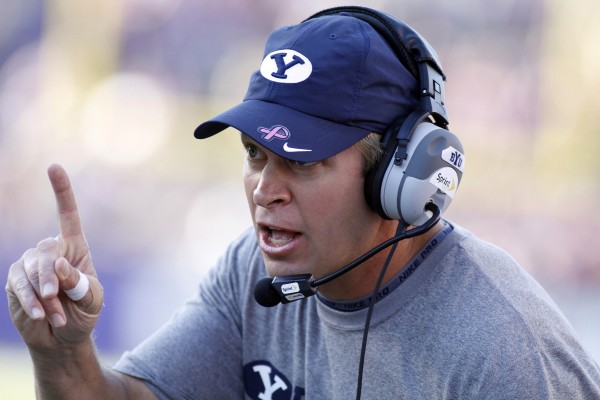 However, one must ask if the Cavaliers improved enough in an ACC Coastal with Mark Richt and Justin Fuente as new coaches, and Paul Johnson and David Cutcliffe as veterans.

There’s a lot of mystery surrounding this hire in Charlottesville. Part of the mystery lies in the notion that the Cavaliers are not as good a program as the one Bronco Mendenhall left behind.

This really is the center of the story, the heart of the latest spin on the coaching carousel.

It’s very hard to say just how much this move will improve Virginia. With Mendenhall, the Cavaliers can move forward and try to improve their standing in a cutthroat division. That drama will play out in due time.

Right now, though, the big(ger) story of “Mendenhall to Virginia” is what it means for Brigham Young University.

Quite abruptly, with a move whose secrecy and Western origination point were matched by the Mike Riley move to Nebraska a year ago, BYU is left to ponder how it should fill its vacancy. Oregon State very quickly plugged Gary Andersen into its open slot 12 months ago, right after Wisconsin’s Big Ten Championship Game face-plant against Ohio State. BYU might have an immediate idea about a replacement. It might want to wait. Whatever the Cougars choose, though, their situation is far more important — and precarious — than Oregon State’s situation after the end of the 2014 season.

This point is not a complicated one, but it requires an explanation.

BYU left the Mountain West a few years ago to become an independent. The Pac-12 did not want the Cougars. The Big East died. In terms of having access to a power conference, the Big 12 is it. However, the league — realizing that distributing money to 10 schools instead of 12 means more money for each member school — has sensibly stayed at 10 teams. With Oklahoma about to make the College Football Playoff, the need for a conference championship game doesn’t seem to be as acute.

BYU wants the Big 12 more than anything, including independence. The program does well in terms of gaining national television slots against attractive opponents. However, without a conference — including The American, whose West Division offers the promise of a logistically manageable travel situation each season — BYU essentially exists in a situation which involves no margin for error as far as the program is concerned.

If you ask BYU fans what the goal of the program should be, you will get one answer far more than others. Cougar fans want to be able to make the College Football Playoff, and they care far less about access to the New Year’s Six bowl structure. A 12-game schedule created as an independent team offers more upside and challenge than a conference schedule and a four-game non-conference slate. BYU can make a considerable amount of television money from its unaffiliated arrangement, and if the program goes 12-0 against its independent schedule, it will indeed make the playoff. Going to The American and the Group of Five is not worth it for most BYU backers.

Here’s the two-pronged problem for BYU: The Cougars can’t play a 13th game (i.e., a conference championship game) as an independent. They also don’t receive the same consideration for New Year’s Six access that the Group of Five’s conference champions get. BYU has positioned itself to prosper on a grand scale if it goes 12-0, but any loss will likely move the Cougars to the back of the line in terms of playoff access, NY6 access, and overall national access to the best bowls available.

This is where the vacancy at BYU takes on added importance.

Houston is a program many college football observers think would fit in the Big 12. The fact that the Cougars retained star coach Tom Herman adds to the idea that the Cougars could soon gain Power 5 status. The program certainly checks some primary boxes — new on-campus stadium, competitive compensation, proximity to fertile recruiting areas — a power program should have. If Houston is to move to the Big 12, though, it needs to have a partner to create a 12-team league and a conference title game. Does BYU want to be that team?

The Cougars better nail this hire. It’s a huge one for reasons far beyond performing well in 2016 and the next several years. If BYU wants to move to the Big 12, it has to have a top-quality coach… now. (Nota bene: Steve Sarkisian and Mike Leach have zero chance. Don’t even go there.)

One name you will hear in connection with this job is Ken Niumatalolo. He is Mormon, and he is as respected a coach as you’ll find in the country. Keenan Reynolds, the best quarterback he has coached at Navy, is about to graduate. Niumatalolo is very, very happy at Navy, but if a specific job opening ever made sense as a realistic new landing spot for him, it’s BYU.

There’s just one problem: Niumatalolo witnessed this past season what a move to a conference can do for Navy. The Midshipmen began playing college football in the 19th century. They played their first season in a conference in 2015. They went 7-1 in The American and came within one win (or one Houston loss to either Cincinnati or Memphis — two games decided by a total of four points) of a division title and a chance to play for a New Year’s Six bowl berth. Conference affiliation gave Niumatalolo one of the most satisfying seasons of his career.

Would he reject the BYU job based on the school’s lack of a conference affiliation? It might not be the first thing he thinks about — and that’s if he even considers the job enough to interview for it, which he might not. However, coaches have to weigh many factors when moving from one job to another. Niumatalolo will need to consider what he’s walking into if he chooses to pursue this job. So must Kyle Whittingham, the Utah coach who very nearly won his first division title in the Pac-12 South this season.

When any coach interviews for the BYU vacancy, he will surely ask about the school’s plan for gaining access to the College Football Playoff and/or the New Year’s Six. The school needs to have a good answer… and then convince its coach that it can achieve lofty goals together.

Yes, Virginia will make an interesting story next season in the ACC Coastal’s loaded lair of quality coaches.

However, BYU becomes the program which now stands in the center of the coaching carousel’s very bright spotlight.

Virginia might have improved by two games for the next several years. BYU now faces a decision which could drastically alter the long-term future of the Cougars — with or without a conference.