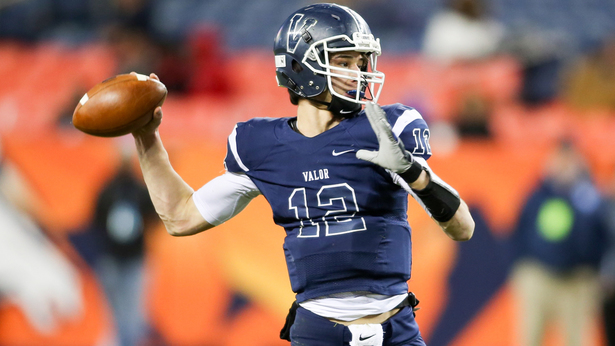 The Wolverines secured the commitment of 2017 quarterback Dylan McCaffrey, rated currently as the number two overall pro-style quarterback by 247 Sports. McCaffery has strong bloodlines with his brother being Christian, the 2015-16 Heisman finalist at Stanford, an Ed his father, a long-time NFL receiver for the Denver Broncos.

After much consideration, I am Very proud to announce I have committed to the University of Michigan! #GoBlue pic.twitter.com/spHPcFrQb5

Dylan, as the youth are want to do, announced his decision on Twitter. Stanford and Duke were also reportedly in the hunt for him.

While it seems players commit earlier and earlier anymore, it’s still a huge coup for Michigan, bringing in another highly sought after quarterback only one class after four-star Brandon Peters of Indiana signed with the school.

You can debate the relative importance of the quarterback in the college game versus the NFL, but it’s clear that Harbaugh is a rolling ball of recruiting butcher knives when it comes to getting high school signal callers to believe in his process, even at the expense of not having a gifted starting job. Harbaugh sells competition, and elite players are lapping it up.

Harbaugh has a lot to sell, also. His first project was an unknown player named Josh Johnson at the University of San Diego. Johnson would go on to be a combine darling and eventually drafted in the fifth round by the Tampa Bay Buccaneers.

And while Andrew Luck is the most famed recruit under Harbaugh, folks forget that he actually got a commitment from BYU standout Taysom Hill before Hill realized the schedules with his missionary work weren’t going to jive immediately with what Stanford needed. He would have had to cut his missionary work off early or be in Palo Alto later than he wanted.

A turn to the NFL indicates why the sell basically is “showing up.” Harbaugh’s first NFL year coaching the San Francisco 49ers saw then-quarterback Alex Smith post a quarterback rating over eight points higher than any other season in his career.

Past that, the 49ers went all the way to the NFC Championship in what was Smith’s first playoff action. In 10 games the following season, Smith posted a 14-point higher rating than his first year under Harbaugh. Colin Kaepernick took over, a highly sought after recruit in his own day, and Harbaugh oversaw his throwing 50 touchdown passes to 21 interceptions in 45 games.

This first season without Harbaugh, Kaepernick threw six touchdowns and five interceptions before being injured and shutting it down for the season. In his first season at Michigan, Harbaugh again solidified the position after years of inconsistent play.

The rub with any sell job is the Return on Investment (ROI). Every coach sells a strong ROI, whatever that recruit is looking for, but Harbaugh has plenty of proof that he has a clue as to how to get there rather than flap the gums.

That’s why they seemingly keep coming to wherever he is, no matter who has committed before them. And this time, they have a Heisman favorite’s support, too. That can’t hurt going forward.

Congrats to the little bro @dcaf20 !! Committed to @umichfootball today!! Can’t wait to see what the future has in store for you!