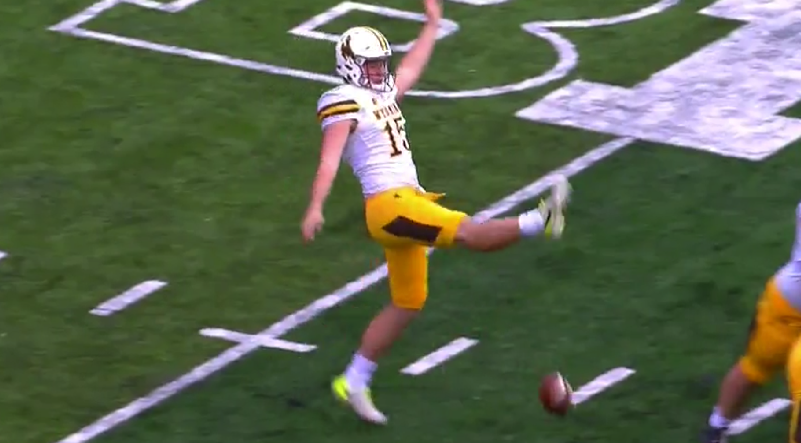 So why, with the NFL still a week away from kicking off, has there not been a bigger push from the college football world to make a big splash to start the year on Thursday night?

The college football season officially got started last weekend with the so-called Week 0, a handful of games that is not enough to merit the distinction of being Week 1 of the season by the powers that be. This week, the true Week 1, serves up a number of games on the first Thursday night of the college football season and will continue with more on Friday night and roll through the Labor Day weekend with the main course of games on Saturday followed by some nice offerings on Sunday and Monday. Miami and LSU are playing in the home of the Dallas Cowboys on Sunday night and Florida State is hosting Virginia Tech in an ACC contest on Monday night. These scheduling decisions perhaps come at the request of some television partners, and with the expectation that getting a chance to play on a Sunday or Monday without the NFL hogging all the attention was an incentive for some conferences and schools to allow for scheduling some games beyond the traditional Saturday on the opening weekend.

But on Thursday night, the impact games seem to be lacking on the schedule, which is unfortunate. Unless you are a fan of a team playing or have some money riding on the outcome, chances are the more casual college football fan will wait for Saturday to begin digesting the 2018 season. This will be the only Thursday night of the college football season that will not have to compete with the NFL’s regular season. It will, however, have to go up against the last week of NFL preseason games, which generally are played by backup players and players merely fighting for a roster spot before the last cuts before the regular season. Only two of those games will be on national TV, with the NFL Network carrying Detroit vs. Cleveland and Arizona hosting Denver. Maybe NFL preseason is still too much of a scheduling concern, but this feels like a missed opportunity to have some lavish kickoff game or intriguing non-conference game to put on TV for college football to shine.

You can argue that this particular Thursday night has some intrigue with UCF opening up on the road in conference play and a new head coach, Purdue looking for an early statement win against Northwestern, and Jimbo Fisher making his Texas A&M coaching debut against an FCS opponent. That’s about it. On the first college football Thursday of the season, the sport is essentially punting on third down when its only competition is the most meaningless and least intriguing week of the NFL preseason. Compare that to the NFL, where the defending Super Bowl champions take on a worthy opponent on a regular basis (this year, the Eagles are hosting the Falcons, and last year, the Patriots hosted the Chiefs for example). We don’t need to put the defending national champions Alabama on Thursday night against Louisville, but I’d take that over Saturday night in Orlando. Would you? The point is, there are games that can make for a more attractive opening Thursday night for college football, and it takes just a few people in power at TV partners to help make it happen.

College football does belong on Saturday, and the first full Saturday of the season has games to keep you interested from start to finish. But why couldn’t just one of those games be played on a Thursday night this week? A game like West Virginia and Tennessee, being played in Charlotte, would be a great Thursday night matchup to drum up on a network like ESPN. No disrespect to Northwestern and Purdue, but the general college football consensus would likely be much more interested as a whole to scoping out the Mountaineers and Vols, form the Big 12 and SEC respectively, in a Thursday night game instead of a Big Ten between West Division foes that are expeceted to finsih behind Wisconsin anyway.

Instead, West Virginia-Tennessee will be slotted in the 3:30 PM ET time slot on CBS on Saturday and competing against Washington-Auburn over on ABC, at the same time the defending SEC champions from Georgia are kicking off on ESPN and Penn State is taking on Appalachian State on Big Ten Network and USC is taking on UNLV on Pac-12 Network (if you can find it). CBS will do just fine with their game, but the chance to maximize exposure to just one of the interesting games in Week 1 is missed by not finding a way to get it on Thursday night.

I’m just using West Virginia-Tennessee as an example. Take your pick from the Saturday lineup this week. North Carolina at California? BYU at Arizona? Maryland vs. Texas? The options are sitting right there.

There is an opportunity for some TV network or conference or conferences to come together to form an annual Thursday night kickoff event that will drum up some excitement. If they don’t find a way to make that happen and continue to yield Thursday night to drab NFL preseason games, that’s a mistake. Once the NFL gets its regular season going, we know the reality of the college football scene. But for one Thursday of the season, why not go all out to make it as fun and interesting as possible?

3 thoughts on “With no real NFL to interfere, why does college football punt on the first Thursday night of the season?”