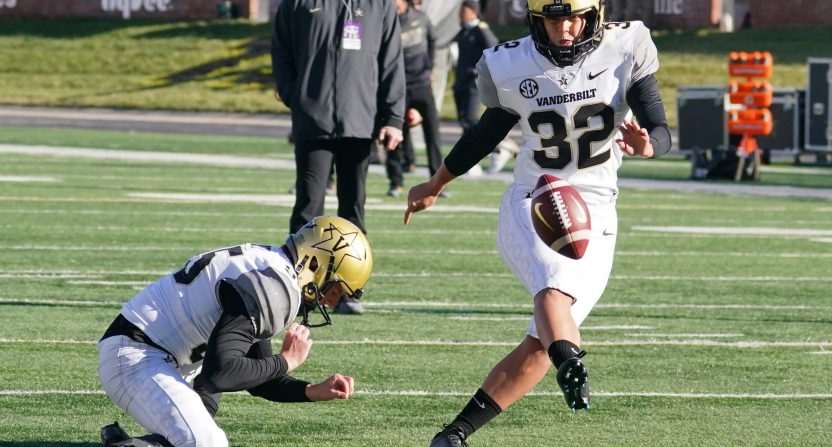 It took a bit longer than people hoped (in more ways than one) but Vanderbilt Commodores kicker Sarah Fuller made history on Saturday, becoming the first female to ever play in a Power Five conference college football game.

Fuller, a goalkeeper for the Vandy women’s soccer team, joined the football team earlier this week when most of their specialist players ended up in quarantine due to Covid-19 testing. Head football coach Derek Mason said at the time that Fuller “is an option for us.” She became THE option for the team on Saturday when Fuller was the only kicker on the travel roster when the team arrived in Missouri to play the Tigers.

She got a pretty nice moment before the game when she was able to say hi to her parents from the field.

However, some reality set in once the game started, and Vandy seemed completely unable to get within any kind of field goal range, let alone score a touchdown. With the Tigers kicking off at the start of the game and controlling the entire first half, there was no chance for Fuller to enter the game. However, that changed as the second half started and Vanderbilt kicked off to Missouri, which meant it was finally Fuller’s time to shine.

Sarah Fuller squibbed it exactly where she was supposed to (watch Vanderbilt's coverage guys all funneling short right) and left it un-returnable for Mizzou. Probably one of Vandy's best executed plays of the day in all honestly pic.twitter.com/7cEY8j9rnN

The squib kick made it to around the 35-yard-line, made it tough for the Tigers to return, and even gave Vandy a shot at recovering the ball. So all in all, a very solid effort. Presumably, the first of many on the day and season ahead.

The accolades started pouring in right away, including from the team that Fuller lined up against. Missouri’s fans also cheered for Fuller on the kick.

Congrats to Sarah and congrats to the Power Five conferences for taking a big step forward, even if we needed a global pandemic to make it happen.