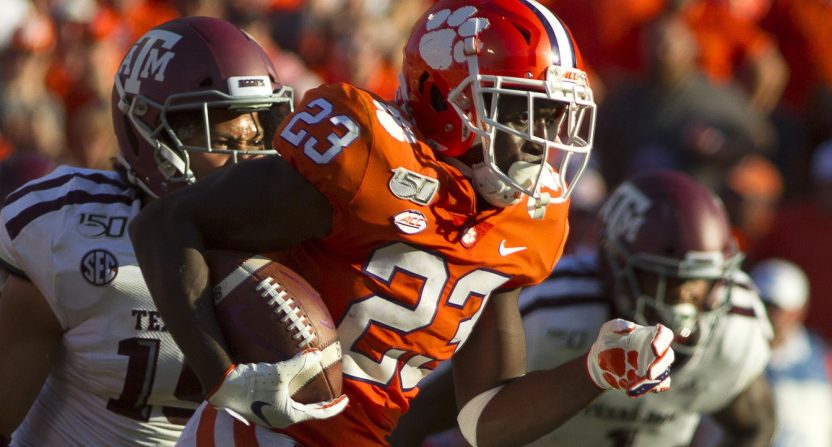 Anything can happen in college football, and it’s still very much possible the odds come back to haunt No. 1 Clemson and the Tigers stub a toe in the next few months. But with the defense coming up with an aggressive performance against what may be the biggest threat to them this season, it may be time to start penciling in the defending national champions for a fourth consecutive College Football Playoff appearance.

We sort of knew this would be the case for Clemson, of course.

Dabo Swinney has the class of the ACC by far, with a Heisman Trophy caliber quarterback in Trevor Lawrence, and one of the top running backs in the nation with Travis Etienne. And that defense? They’re pretty nasty too. Against the Aggies on Saturday, Clemson held Texas A&M out of the end zone until the final six seconds of the game (thus providing a nice backdoor cover for some out there and burning others in the process in spectacular fashion). Before that final 16-play, 91-yard drive by the Aggies, Clemson had held the SEC West program to 198 yards of offense, and just 150 yards since Texas A&M opened the scoring in the second quarter with a field goal. Clemson’s offense grabs the spotlight pretty easily, but it was the defense that will make beating the Tigers one of the biggest challenges any team lining up on the other side of the field will have to figure out.

Clemson’s next game is at Syracuse, perhaps the one team that has given the Tigers the biggest fits the past two seasons in conference play. But the Orange just dropped a 63-20 decision on the road at Maryland on Saturday, a week after a less-than-inspiring performance in the season opener at Liberty (a team coaching from a hospital bed in the press box). And yet, Syracuse may still be the biggest hurdle remaining for Clemson before the College Football Playoff opens.

But that is not to suggest Swinney and his staff don’t have at least some things to work on. A couple of 3-and-outs to start the second half on offense weren’t exactly a part of the plan for the Tigers, and Clemson was only 3-of-10 on third down. Granted, Texas A&M was the best team on Clemson’s schedule, and some credit should be given to what Jimbo Fisher and his program did in one of the toughest environments.

With Syracuse about to plunge out of the rankings this week, there may not be a single ranked opponent to face Clemson the rest of the season unless Boston College or South Carolina can wiggle in. Boston College is off to a 2-0 start and has games against Kansas and Rutgers coming up next, before games against Wake Forest, Louisville, and NC State. So, it’s feasible Boston College could be in the top 25 when they visit Death Valley in late October. South Carolina has a much tougher path to a top 25 ranking entering the final week of the season. After losing their opener to UNC, South Carolina still has games to play against Alabama (next week), Georgia, Florida, and Texas A&M before getting to Clemson in the regular season finale.

We don’t need to concern ourselves with the possible lack of top 25 opponents for Clemson, because they can handle their own business. Regardless of the schedule, Clemson will continue to prove they’re one of the best teams in the sport.