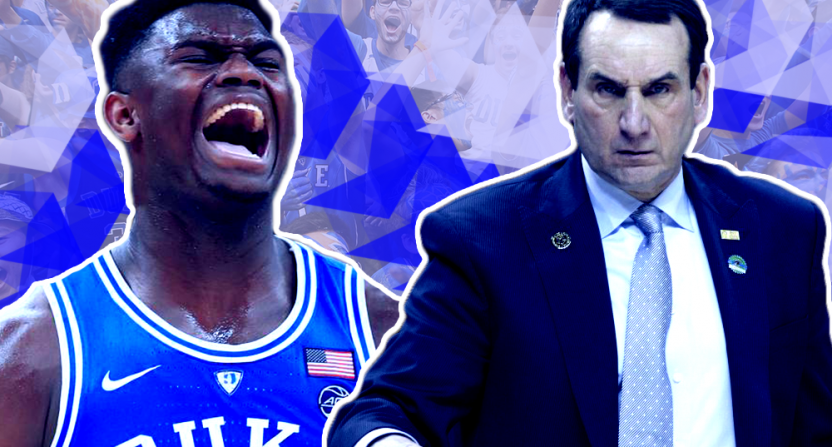 Every season brings us great college basketball teams. Teams that spend much of the season at No. 1, teams that dominate all year long, and teams that make unflinching marches to the Final Four. Almost every year we’re treated to a good team from Duke, North Carolina, Kansas, Kentucky, and Gonzaga. And any given year there are programs that rise up and excite us with dunk highlights and deep tournament runs.

But most of them aren’t spectacles. Attractions that you cannot possibly miss. Once-in-a-decade experiences that demand not only your attention but also your attendance.

John Wooden’s UCLA juggernaut, Patrick Ewing and Georgetown, The Fab Five at Michigan. Maybe one or two more but that’s about it. While the season is far from over, it seems to be abundantly clear that this year’s Duke squad featuring Zion Williamson is one of those teams. Despite the fact that they’ve got two losses to their record (thanks to Syracuse and Gonzaga), fans are lining up to see this sure-thing phenom in action during his (presumably) only college season.

If you don’t believe us, just look at what’s happening with the ticket prices and attendance numbers for the Blue Devils’ upcoming games.

It’s nothing new that Duke vs. North Carolina is a hot ticket. That’s a given. But exactly how much those tickets are going for is worth noting. Because even in the storied annals of this series, we’ve rarely seen prices like these. Per ESPN, the cheapest ticket available right now will run you $2,500. To put that in perspective, that is just shy of the price of the cheapest ticket for Super Bowl LIII.

The average ticket price right now for the game is hovering around $4,000. In fact, according to Vivid Seats, one ticket to game sold for $10,652. That’s the kind of price movement you usually only get from some of the biggest superstars in pro sports. Again, for perspective, tickets for last year’s national championship game between Villanova and Michigan were going for as low as $67 right before tip-off.

Even if Duke falters in that game, that’s unlikely to affect the impact they’ll have on the local economy when they show up in Syracuse. ESPN Gameday is in town for this showdown between the two ACC schools, but they’re not the only ones who want to see Zion when he’s in town. Per SeatGeek, the most expensive tickets in the Carrier Dome on Saturday is $3,464. Sure, the cheapest ticket is $45 but those seats are all the way across the cavernous stadium where you can barely see the court.

Oh, and did we mention that the Syracuse-Duke is almost certainly going to break the on-campus attendance record. It should be noted that the previous record was also a Syracuse-Duke game in the Dome, but the record has stood since 2014 because there hasn’t been an opponent who could push the needle since then. Until Zion came around.

And we’re not done yet. Duke still has their end of the season showdown at Chapel Hill. And then there’s the ACC Tournament and the NCAA Tournament, which are sure to see soaring ticket prices as well.

Whatever you think of his chances in the NBA and his destiny to become a superstar, there’s no denying that people want to see Zion Williamson right now. And they’re willing to pay through the roof for it.