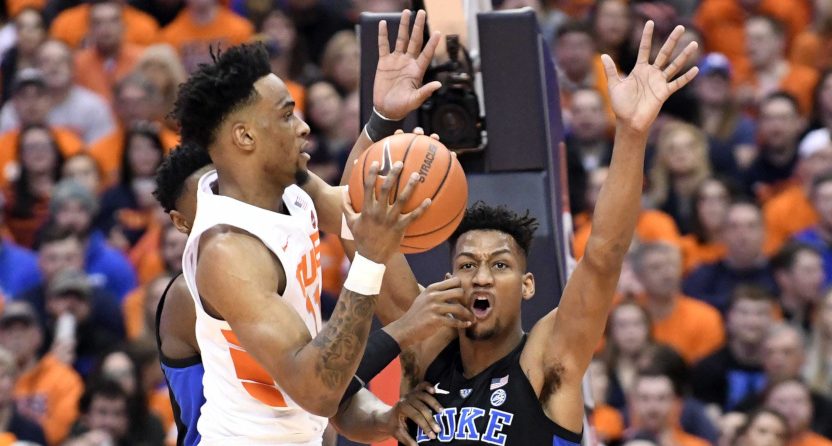 Most of the talk this week around the Duke Blue Devils has been about how they’d play Saturday without star Zion Williamson, who suffered a knee injury Wednesday night in a loss to No. 8 North Carolina and has since been listed as out with a sprained knee. Saturday evening’s clash was also notable considering that Duke was on the road against the Syracuse Orange, who handed the Blue Devils one of their three losses this season at Duke’s Cameron Indoor Stadium in January, and considering that a crowd of 35,642 (a NCAA record for a regular-season basketball game) was in attendance. But Duke wound up being just fine; Syracuse led 34-29 at the half and had the score tied at 50 with 12:48 left, but the Blue Devils pulled into the lead soon after and wound up with a 75-65 victory.

For Duke, with no Williamson to lean on, it was fellow freshman forward R.J. Barrett who stepped up. Barrett finished with 30 points on 14 of 20 shooting from the field and added seven assists and five rebounds. Meanwhile, sophomore guard Alex O’Connell chipped in 20 points and five rebounds, while junior forward Javin DeLaurier (seen above guarding Oshae Brissett) had seven rebounds (four on the offensive glass) and three blocks. The Blue Devils also played terrific defense, holding Syracuse to 34.3 percent shooting from the field and keeping Orange star Tyus Battle in particular in check; he had 32 points on 12-of-28 shooting in January’s win, but was held to 16 points on four-of-17 shooting Saturday.

Of course, this doesn’t mean it’s all smooth sailing from here for Duke. They’re still shaking off that 88-72 loss to North Carolina from Wednesday, and Syracuse currently doesn’t look like as much of a threat as some other top teams. While the Orange pulled off that upset win over the Blue Devils in January, they weren’t ranked then and still aren’t now, entering this game with just an 18-8 record (9-4 in the ACC). There also are some external issues to consider on the Syracuse side, as they were facing off-field storylines of their own after head coach Jim Boeheim struck and killed a pedestrian with his car Wednesday while trying to avoid a stopped car blocking traffic on a highway. While Boeheim wound up coaching Saturday, his team certainly had some possible distractions too.

But all in all, the Blue Devils put up an impressive performance without Williamson, and they showed that they have a whole lot of other talented players. That doesn’t mean they’re invincible; after all, they lost to the Orange with Williamson in the lineup last month, and they’ve had some other setbacks here and there. They also looked like they might be en route to another loss with the early deficit Saturday. But they rallied well, and proved there’s still a lot for opponents to contend with with this team even when Williamson isn’t suiting up for them.