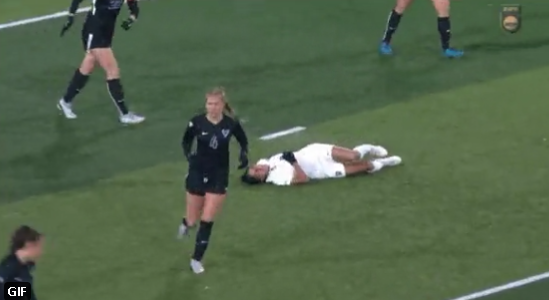 Soccer has often seen complaints about players going down or staying down in attempts to draw fouls. But it’s only rarely seen a player go down, stay down, get up several seconds later after no call was made, and immediately score a crucial goal. That’s what happened in a women’s soccer NCAA Tournament first-round match between the No. 19 Pittsburgh Panthers and the Buffalo Bulls Saturday, though. And that wound up getting a lot more attention thanks to an apt meme comparison.

First, the goal. With the match scoreless in the 85th minute Saturday, Pitt senior forward Leah Pais went for a ball in the box, went to the ground after contact, and stayed there for at least five seconds after Buffalo cleared the ball away. But Panthers’ midfielder Anna Bout recovered the ball and came down the left wing, and Pais got up just in time to record what would prove to be the match-winning header off of a cross by Bout. Here’s how that looked on the standard broadcast:

ARE YOU KIDDING ME⁉️ GOOOOAAALLLL!@leah_pais scores with five minutes left and the Panthers take the lead!

This play was remarkable enough from that video, and that tweet had 50-plus retweets and 340-plus likes as of 5 p.m. ET Monday. But it really took off further (receiving over 10 times the retweets and likes, also as of 5 p.m. ET Monday) from soccer writer/podcaster André Carlisle‘s GIF of a close-up replay centered on Pais, which he posted Saturday evening with a perfect meme analogy:

ain't never seen a 'call an ambulance but not for me' goal before but i am HOWLING pic.twitter.com/zhAEOUIFjd

For those unaware, “Call an ambulance, but not for me!” is a 2018-originated photo/video meme of a simulated would-be mugging victim pulling a gun on his attacker, from a Silver Series Self-Defense workshop for senior citizens in Las Vegas. And it fits this rather perfectly, with Pais certainly turning the tables on the Bulls here. This also prompted some funny responses, including one from the University of Pittsburgh’s official Twitter account:

Some other good responses:

This is the real life version of the key and peele skit @JordanPeele @KeeganMKey https://t.co/W6M2GDka5t

Find me a better example of “survive and advance”, you can’t. #H2P

Indeed, the Panthers did survive and advance. And that’s continuing a notable run for them, as this was their first-ever NCAA Tournament game. The fourth-seeded Panthers will now face the fifth-seeded Georgetown Hoyas in a second-round clash Friday in Tallahassee. We’ll see who needs the ambulance in that one.