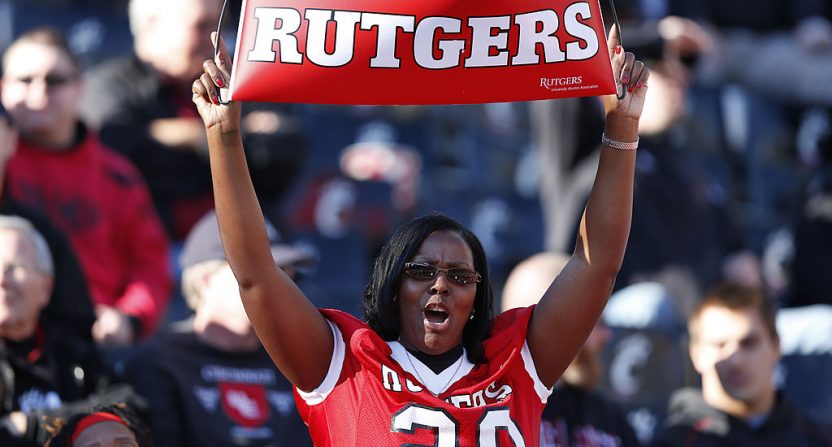 South Carolina’s men’s basketball program hadn’t won a NCAA tournament game from 1974 until this season, and now the Gamecocks are heading to the Final Four. With Frank Martin’s program reaching this level never experienced before in school history and so close to a surprise national championship nobody would have seen coming even with a Gray’s Sports Almanac from the future, there are going to be so many opinions and thoughts about the South Carolina program and athletics department.

They have earned this opportunity to shine in the spotlight, but that also means they are now open to taking shots that will come from a flame thrower for one reason or another.

On Monday, noted sportswriter Bob Ryan touched a nerve with some when he took to Twitter to offer his comment on South Carolina’s decision in 1971 to leave the ACC.

This was a confusing opinion to digest for many, considering South Carolina ended up moving from one conference with common sense geographical ties in the ACC for one that today actually has more common sense geographical connections in the SEC. While the SEC added schools like Texas A&M and Missouri, the ACC has continued to move north with the additions of Boston College, Syracuse, and Pittsburgh. Simple geography? That seems to be an advantage in the SEC for the Gamecocks today. The sports culture at South Carolina also seems to fall in line with the SEC crowd as well.

So what is Ryan talking about? Well, it isn’t money.

You guys are talking money. I understand the business. I'm talking common sense. And why So Car left. It wasn't about the $$$ then.

Why did South Carolina leave the ACC? It all boils down to differences in opinions over recruiting regulations and the influence carried by schools in the state of North Carolina. Basically, South Carolina didn’t like the direction the ACC appeared to be going and split. It took a while to land back on their feet in the SEC, and perhaps that held South Carolina back for a while. If that is the point Ryan is attempting to make, that may be a fair assessment. Regardless, given how things have turned out over the years, is Ryan’s claim that South Carolina’s decision to leave the ACC really sitting on top of the list of all-time worst realignment decisions?

Well, actually, it might be higher than you initially think.

When the Big Ten announced it was inviting Rutgers and Maryland to the conference, there were mixed opinions. There was a clear push to expand the conference in an eastward direction, but options like Georgia Tech, North Carolina, Virginia, Virginia Tech, Syracuse, and Pittsburgh were either non-existent or too far-fetched or too late to discuss. Instead, the Big Ten offered an escape from a financial burden to Maryland and added on Rutgers to come up with a 14-team conference that would allow for a reworking of the division lineup. In the case of Rutgers, the push to get the Big Ten brand as close to the New York market was complete, regardless of how valuable that NYC market really is.

But could the Big Ten have managed to cut a slice of the Big Apple without Rutgers? Does Rutgers really bring that much value to the conference? Was Rutgers really the key to working out a deal with the New York Yankees and the Pinstripe Bowl? That is doubtful at best, because the Big Ten and Yankees could have just as easily worked out a way to make a deal for more money with or without Rutgers, and odds are they would have. Rutgers has pretty much been a hot mess and a laughing stock since joining the Big Ten. But that Big Ten Network money sure is worth it!

The problem with Ryan’s assertion that South Carolina leaving the ACC was the biggest mistake in conference changes is over the years is it’s not even the worst decision by a school to leave what would become a power conference.  Tulane was a charter member of the SEC in 1933, but the school made the decision to leave the conference in 1964 because of a fundamental difference in opinion regarding scholarship limits. Tulane (and Georgia Tech, who joined the ACC) wanted scholarship restrictions to be limited to 140 between football and basketball, but the rest of the SEC was not willing to place a cap. With that being the case, Tulane took off for football independence until the formation of Conference USA in 1996.

Had Tulane stuck around and remained in the SEC, who knows where it would be today. Would Tulane be on the same level as LSU? The world may never know.

3. UMass joining the MAC in football

Not so long ago the MAC filled out its football operations by having Temple as an associate member. That created some balance issues with the conference and it was decided to add UMass after the Minutemen made the move up to the FBS. That was supposed to be a bit of an east coast pairing for Temple, until the Owls flew the coop and headed back to their roots in the Big East, soon to be the American Athletic Conference. UMass hung on in the MAC until the end of 2015 season, when the conference finally cut the bait and left UMass stranded in the world of FBS football and no conference to call home. If UConn wasn’t going to get an invite to a power conference, UMass stood no chance.

The Minutemen continue to move forward in hopes of perhaps one day getting a conference to come calling. Until then, there are some hoping the school will consider going the Idaho route and drop back down to the FCS.

If we criticize Tulane for leaving the SEC over disputes regarding scholarship limitations, then South Carolina should be fair game for why they left the ACC as well. The difference, of course, is South Carolina landed on its feet by getting into the SEC and reaping the benefits of the conference’s annual revenue shares that continue to rise every year. Tulane could have had that too if they waited things out, and maybe if Tulane stuck around there would be no room for South Carolina in the first place. Landing in the SEC is not a bad alternative, but it took a very long time for that to become a possibility, which is why South Carolina lands here.

5. The Big 12 dragging its feet and leading on any number of schools in the process

The Big 12 ultimately deciding to stick with a 10-member conference last fall after teasing the idea of expansion is a perfectly fine decision. I have always felt that expansion for the sake of expansion is not a wise strategy, even if it results in the addition of a conference championship game. Of course, the NCAA made a ruling that would allow the Big 12 to hold a conference title game in football if it wanted even with 10 members, so the “need” to expand was eliminated. Even if the conference did expand, that’s just at least two more schools to split the revenue with, and the numbers just didn’t make financial sense for the Big 12, depending upon the source of projections and estimates.

So evaluating all options for possible changes made perfect sense and was fair. Making schools like Houston, Cincinnati, UCF and how many other schools think they may actually have a chance to join the conference for as long as the Big 12 did was just not right.