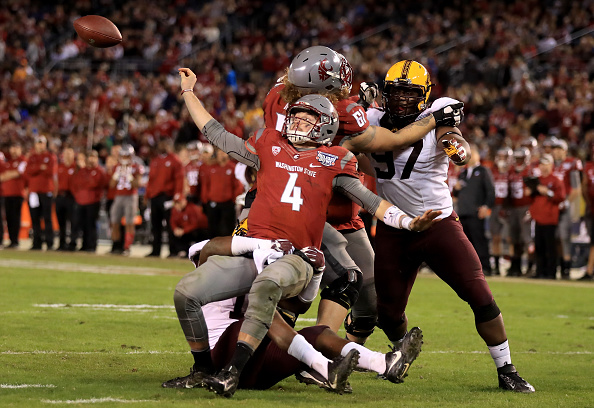 Holiday Bowl? How about the Nightmare After Christmas? That about summed things up for the Washington State Cougars in their 17-12 loss to the Minnesota Golden Gophers Tuesday night.

Both teams were 8-4 heading into the bowl, but WSU was a 10-point favorite, and many expected their powerful offense (40.2 points per game, 14th in Division I FBS) to put up points; the over-under was set at 61. Minnesota’s defense was decent this season (22.5 points per game allowed, 23rd), but the suspensions of 10 of their players after a sexual assault investigation by the school and the threats by other players to boycott the game in support of the suspended players (which were eventually walked back) created a lot of uncertainty about how they would play. However, Tuesday’s game saw the Cougars’ offense largely stopped, and their defense give the Golden Gophers a gift of a touchdown on this tipped ball:

Things didn’t get much better from there. Washington State was held to just 303 offensive yards on the night, and their rushing game was particularly stopped; they picked up just 39 rushing yards on 23 carries (1.7 yards per attempt). Quarterback Luke Falk was under pressure all night and didn’t cross the 200-yard mark until late in the contest (he finished 30-for-51 for 264 yards with a touchdown and an interception), and he didn’t throw a touchdown until the final minute. The 12 points the Cougars put up were their lowest of the season, and they had plenty of bad moments.

One of those moments came with 19 seconds to go, where the Cougars finally got a touchdown. They then failed on the two-point conversion four times in an interminable sequence (an incomplete pass with a targeting call, a review of that targeting call, a false start, a timeout, an offside, and a pass thrown and caught just short of the goal line). Things then got worse with a poorly-executed onside kick, which Minnesota easily recovered to finally end the game. In the end, it was a holiday most WSU fans probably would like to forget.