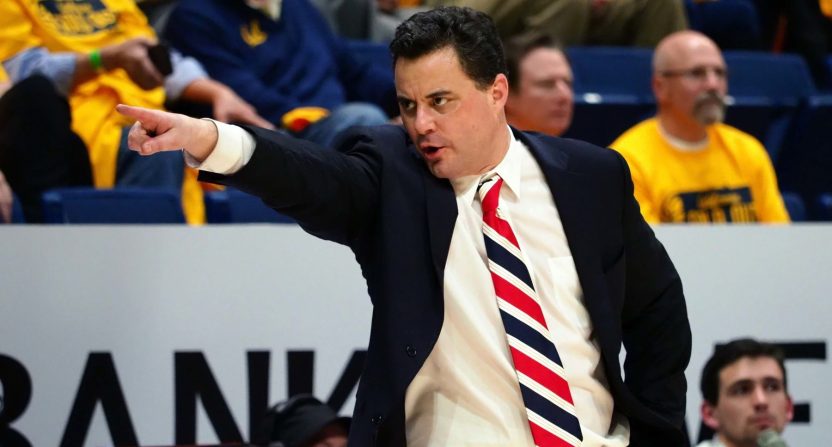 While this investigation was serious enough for him to lose his job, rumblings started on Wednesday that the infamous head coach could be a top candidate for the new opening at Xavier following the firing of head coach Travis Steele after the program missed out on the NCAA Tournament in 2021.

These rumors clearly were well-founded. Reports on Saturday said that Miller has agreed to be the new head coach at Xavier next season.

BREAKING: Sean Miller has agreed to a deal to return to Xavier, source told @Stadium.

The ex-Arizona coach spent 5 season as the head coach of Musketeers from 2004-09 and went to four NCAA tourneys — including an Elite Eight in 2008.

This will be a reunion for both Miller and Xavier, as Miller started his coaching career at the program from 2004 to 2008.

During his tenure, the Musketeers went to the NCAA Tournament in four-out-of-five seasons on top of winning their conference tournament in 2005.

The solid track record of Miller has many Xavier fans excited for a potential revival of the program going forward.

Congratulations to Sean Miller! Great coach and will do big things in his return to Xavier. This Wildcat will be cheering Sean on. https://t.co/C4zqCLrfNy

Don’t call it a comeback. Or maybe, do call it that. https://t.co/KjbXXrGnBs

Getting the band back together. Chris Mack as top assistant? https://t.co/x4rA3qz4Qo

Even though it seems that Xavier fans seem very excited to bring back Miller, many are calling out the hypocrisy of the NCAA considering that the LSU Tigers just fired their head coach Will Wade for his part in a similar FBI investigation.

Sean Miller getting a job when Will Wade just got fired last week when they were both caught on FBI wiretap doing the exact same thing is pretty hilarious thb https://t.co/TBnlGKbv2c

Ahh yes. We love to see the coach that’s been cheating for years land back on his feet after a 1 year “suspension”.
The NCAA really taught him a lesson. https://t.co/T4QTOEjAgu

If this week has taught sports fans anything considering the massive contract that Deshaun Watson just received despite his ongoing civil cases against him, it is that all can be forgotten if you can produce.

Miller has been an excellent coach in both his stints at Xavier and Arizona, and this is a move that will surely make Xavier far more competitive than they were with Travis Steele.