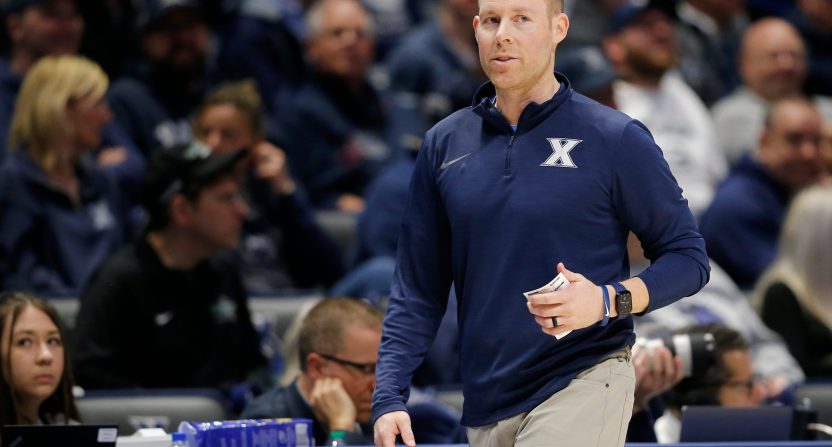 The Xavier Musketeers saw a disappointing end to their Big East Tournament, as their upset loss to Butler saw them miss out on the NCAA Tournament for the second straight season.

This caused speculation to grow on the job security of head coach Travis Steele, who saw his team lose eight out of their last ten games this year.

A decision finally came on his future on Wednesday, which saw the school and Steele part ways following their NIT win against Cleveland State Tuesday.

Steele has been with the Musketeers for four seasons, but had only a record of 70-50 during his time with the team, and did not make the NCAA tournament during his tenure.

It’s clear that some changes needed to be made following a very disappointing final month of the season for the Musketeers. Much of the college basketball world is expressing that same feeling following the news.

good riddance! Let’s get this program back on track now https://t.co/3RX77NtbF1

Xavier was a 1 seed when Chris Mack left in 2018. Travis Steele failed to make the tournament in four years at the school, including a meltdown down the stretch this year.

And just like that, we have a job opening in the Big East. https://t.co/ugnE9WDqgO

I like Steele but it was needed. This year’s performance was awful and the roster was very talented. https://t.co/PE1qbarVLj

This news has also led to many speculating that Xavier had been planning this for quite some time and that they already have a potential name in mind to replace Steele.

There have been reports floating around about a potential reunion for former Arizona head coach Sean Miller, who coached at Xavier as an assistant from 2001 to 2004 and then as their head coach from 2004 to 2009.

Paving the way for a return of former Arizona coach Sean Miller? https://t.co/RfGkQWzpLO

Travis Steele out at Xavier, per @RickBroering. Speculation had been building heavily over the last few hours. The name to watch will likely be Sean Miller. https://t.co/vbxnejwvfI

Miller was let go by Arizona in 2021 after 12 seasons at the program. He was also notably involved in the FBI investigation into paying star center Deandre Ayton while he was playing at the school.

It’s unclear if Miller would be on any school’s radar given that Arizona scandal. But it seems if anyone would be willing to take a chance on him, it could be Xavier considering his past coaching tenure with the program.