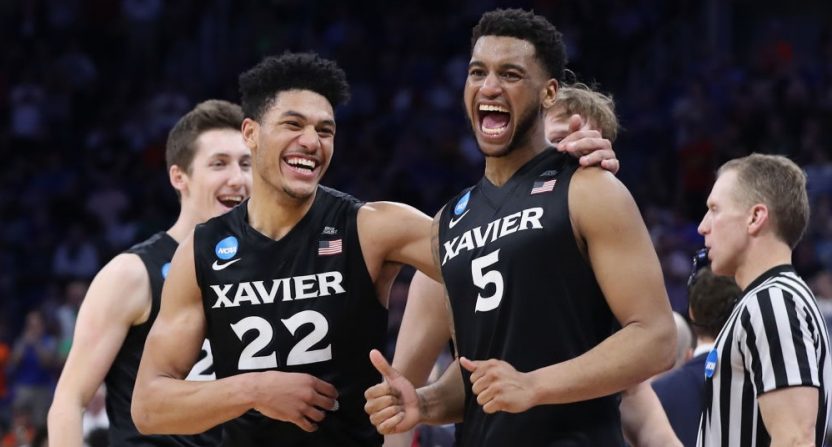 The Xavier Musketeers’ season looked very much in doubt in late January, when sophomore point guard Edmond Sumner tore his ACL during a late January win over St. John’s. To that point in the year, the Detroit product was averaging 15 points, four rebounds and five assists per game while being an enormous part of what made Xavier a potential Big East darkhorse.

After that game, the Musketeers responded reasonably well. They barely got by Seton Hall and Creighton (each a two-point win), then beat DePaul by nine. The team’s early schedule and some decent wins over potential NCAA Tournament teams had them looking well situated for their own return to the postseason.

Then they lost six straight games. All six were to tourney-caliber teams (Villanova, Providence, Butler, Seton Hall and Marquette twice), but teams worthy of making it in March find a way to win at least one or two of those contests.

The bleeding stopped with two consecutive wins over lowly DePaul. Hanging around the edge of the bubble, the Musketeers were likely done for without an upset in the Big East Tournament.

The Musketeers almost downed Creighton too, in the Big East semifinals, but they’d made their case. Despite losing Sumner and dealing with a multitude of other injuries over the course of this year, Xavier had done enough to make the tournament. They just needed their backs to the wall enough to motivate them to move past the losses and injuries, and fight as they had in the early part of the year.

It’s not easy without your point guard, but the team leaned on veterans elsewhere to pick up the slack.

Since March 4, junior Trevon Bluiett has scored at least 17 points in every game, including a dominant 29 points in Saturday’s blowout win over No. 3-seed Florida State. Bluiett is averaging over 18 points per game, so his scoring prowess is far from surprising. Still, watching him shows he’s taken on the extra burden in Sumner’s absence.

Fellow junior guard J.P. Macura has done his part as well. He’s hit double-digit scoring in four of the last five games, and five or more assists in two of those. His expert three-point shooting may have single-handedly kept Xavier in their Big East Tournament game vs. Creighton. He was 6-of-11 from long distance in that contest.

Despite big performances from the veteran guards, however, this Musketeers resurgence has been a team effort.

Xavier was 11-for-17 from beyond the arc against Florida State, while out-rebounding FSU (a team with several seven-footers) and moving the ball extremely well (20 assists) to keep the pace up. The Musketeers weren’t out-muscled inside, and managed to run and score in transition. Florida State, a team that can usually play with tempo (top-40, according to KenPom), just had no answer in the 25-point drubbing.

Coach Chris Mack’s team did the same thing against Maryland in the first round as well.

The Musketeers shot 50 percent from the floor, and were led by Bluiett with 21 points. But reserve forward Sean O’Mara and his 18 points (and seven boards) were really what made the biggest difference against the smaller, athletic Terps.

Mack, as you may have noticed in recent years, has sort of created a program just for runs like this.

Since taking over at Xavier in 2009-10, Mack has made seven NCAA Tournaments, including four trips to the Sweet 16, including this year’s. The 11th-seeded Musketeers are once again among the biggest surprises of March Madness, despite a constant ability to over-achieve compared to their seed. They’ve twice made the tournament’s second weekend as a No. 6 seed. They also made it as a No. 10 seed in 2012.

On top of joining the Big East, which has helped the talent level which the program has access to, Mack has also managed to elevate Xavier’s recruiting even higher than what would be expected of that jump. The 2017 class is currently 10th in the entire country, according to 247Sports. And he’s pulled in two other top-40 classes since 2014 as well. That 2014 class was loaded with top-300 talent, and they’re paying dividends on this year’s team. Bluiett, Macura and O’Mara were all in that class, as was Sumner.

Still, the recruiting numbers, the wins and the NCAA Tournament success don’t stop a consistent underestimation of the program – one that likely stays until they push themselves into the Final Four. Just 15.28 percent of participants in ESPN’s bracket challenge had the team make it to the Sweet 16. Just 3.22 percent have them advancing to the Elite 8.

They’ve only made it there twice before – 2004 and 2008 – and one might argue that both of those teams (coached by Thad Matta and Sean Miller, respectively) were better than this one. But with the way Xavier’s been playing, with their backs to the wall, it’s getting harder and harder to count them out.

The Musketeers will face the No. 2-seeded Arizona Wildcats on Thursday night, looking to pull off perhaps the second-biggest upset in the tournament thus far. Arizona’s big but athletic. They could draw comparisons to Xavier’s previous opponent – or at least as a more talented version of the Seminoles. Despite the physical gifts the Wildcats possess, they did have to claw to get past St. Mary’s this weekend.

None of that matters much to Mack and Xavier. As has been the case at this program for over a decade now, they keep things loose and understand how special it is to be in the NCAA Tournament. That doesn’t mean they’re only happy to be here. They’re just appreciative – and maybe a little hell-bent on fighting past expectations, too.

Since losing their second-best player two months ago, Xavier’s sunk to great depths, then rallied to another surprising Sweet 16 run – and the potential for more. For most programs, that would be miraculous. Increasingly for Xavier, that resilience is just part of their identity.