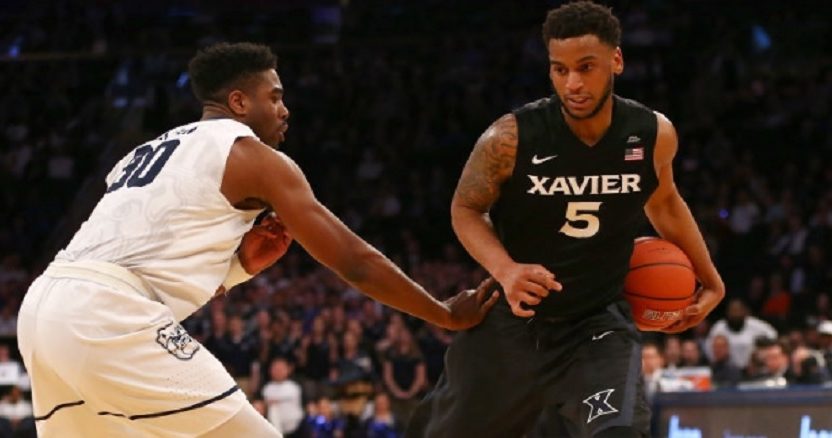 After the biggest win of the Big East Tournament this year to date, the Xavier Musketeers can now rest easy on a snowy New York City Friday.

A well-earned 62-57 win over No. 18 Butler almost certainly ensures that Xavier (21-12) will get an NCAA Tournament at-large bid.

“I don’t look at it as relief,” Xavier head coach Chris Mack said after the game. “We have competitive guys. And they understand what’s at stake. I don’t know how you can’t, 2017, everywhere we go guys have their phones up to their noses.”

Xavier had lost six of its last eight games, with both wins coming against a bottom-feeding DePaul team (more on them later). Without sophomore guard Edmund Sumner (15 points and five assists per game), who suffered a season-ending knee injury and hasn’t played since the end of January, Trevon Bluiett has had to carry a lot more of the scoring burden for the Muskateers. He delivered in a big way in the team’s biggest game.

Bluiett played all 40 minutes and scored a game-high 23 for the Musketeers, including a really tough jumper with 17 seconds left that proved to be the game-winner.

“When I turned around and saw the basket, I felt like I had an advantage trying to get to the rim,” Bluiett said. “So I tried to use my body a little bit. And the main thing was just to stay poised and just got a shot off.”

Butler swept both meetings during the regular season, so Xavier head coach Chris Mack decided to change up the team’s defense against the Bulldogs.

“I switched up how we defend the dribble handoffs and brush screens,” Mack said. It allowed Xavier to play sensational defense in the second half, limiting Butler to 10-of-26 shooting from the field and 1-of-8 from three.

Following Bluiett’s bucket which broke a 57-57 tie, Butler had two phenomenal looks at a potential game-winning three and a game-tying score after an offensive rebound. Neither of those shots fell, and Xavier picked up what’s easily its biggest win of the 2016-2017 season.

“The game could have gone either way down to the wire,” Mack said. “Trevon has done it all year. That’s why we put the ball in his hands.”

The night before, Bluiett and the Musketeers got off to a slow start that put its NCAA bid in very serious jeopardy. Against 9-22 DePaul, Bluiett was held scoreless in the first half and missed all eight of his field goal attempts. Despite those early struggles, Xavier only trailed 31-30 at halftime and was able to quickly grab the lead for good 2:23 into the second half behind Bluiett’s 17 points.

“I thought our guys were pressing,” Mack told The Comeback about the team’s slow start on Wednesday against DePaul. “We couldn’t make a shot. And that’s… we’re no different. A lot of teams come in The Garden with the bright lights and miss a lot of shots. But our team settled in.”

Unlike against the Blue Demons, Xavier got off to a fast start on Thursday against Butler, grabbing a 13-5 lead at the 13:03 mark of the first half. But the Bulldogs got a big 3-pointer from Kamar Baldwin with five seconds before halftime to take a 30-26 advantage into the break. Butler would make only one more trey from that point forward.

“We’re aware of all that stuff,” Mack said about its previously tenuous position. “The bigger issue is making sure we play our best against really good teams. And Butler is a really good team.”

It was Xavier’s first win over a team ranked in the top 25 of ESPN’s RPI rankings and moves the team up to 30th in its index. And it wasn’t just a great win for Xavier, it was also an important one for the Big East Conference. The Big East is now projected to have seven teams— Villanova, Butler, Creighton, Seton Hall, Marquette, Providence and Xavier— in the field of 68, per Joe Lunardi’s latest Bracketology.

The win may have been the biggest for graduate transfer Malcolm Bernard, who scored 12 points and grabbed 10 boards in Thursday’s win. After missing the tournament in three seasons at Charleston Southern and Florida A&M, the 23-year-old was at a loss for words trying to describe what a trip to the Big Dance means to him.

“It’s really unexplainable,” Bernard said. “That’s the reason why I came here, and to see it actually happening, I mean, knowing that it was going to happen already but to actually see it, it’s truly an amazing feeling. And I don’t think I’m going to feel anything better than this.”