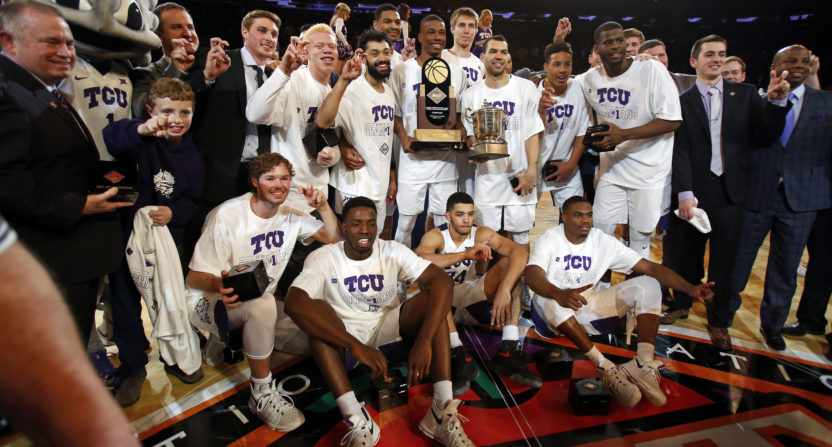 The NIT isn’t everyone’s cup of tea, though ironically, I enjoy it far more than I enjoy tea. But while it’s not the NCAA Tournament, it still maintains a bit of cachet, and lately, it’s served as a testing ground for potential rule changes.

Not just minor ones, either; men’s college basketball first experimented with a 30-second shot clock and the restricted arc during past NITs. The NIT is a great opportunity for experimentation, because it features a variety of teams, from major conference schools that just missed the big dance to small conference regular season champions that failed to win their conference tournament.

Considering any rule changes impact every school, it’s important to see how they might help or hurt certain styles of play relative to others, and it’s also a nice benefit that these are real games with generally good teams that are trying to win. That’s the best testing environment you could hope for.

On tap for this season:

​• The three-point line will be extended by approximately 1 foot 8 inches to the same distance used by FIBA for international competition (22 feet 1.75 inches).
​• The free throw lane will be widened from 12 feet to 16 feet, consistent with the width used by the NBA.
​• The games will be divided into four 10-minute quarters as opposed to two 20-minute halves. Teams will shoot two free throws beginning with the fifth foul of each quarter.
• The shot clock will reset to 20 seconds after an offensive rebound instead of the full 30 seconds.

On the surface, hey, none of those sound bad in terms of experimentation. Let’s rank them in terms of how much they’re likely to impact the game, from least to most.

First, there’s the three-point line. It was moved back to its current distance (20 feet, 9 inches) in 2008, and over the past decade, it’s impossible to argue that the three-point shot is less of a factor for basketball at any level. Moving it back again to the FIBA distance makes sense; it’s not a big enough change to wreak havoc on spacing and sets, so there wouldn’t be much growing pain, and it would (in theory) further emphasize shooting skill, while remaining a lesser challenge than the NBA line. This one might happen.

The next one is tough, but it’s probably the shot clock reset. The overall shot clock was moved from 35 seconds to 30 seconds in 2015, but it’s already hard to imagine why we waited so long. Tweaking it this way is interesting, and reminiscent of how a kicked ball no longer results in a full shot clock. But as an offensive rebound is a live ball, this is going to be a tough adjustment for players and coaches heading into this year’s NIT; a full offseason to get used to it, though, and it wouldn’t be that big of a deal.

It’s a change that doesn’t seem like it would make that big of a difference, and it generally won’t, except for at the end of a game; reducing a team’s ability to run out the clock twice in a row while protecting a lead could, theoretically, make it easier for the trailing team to come from behind, or at least get an extra possession they wouldn’t have otherwise gotten after failing to corral a defensive rebound.

The free throw lane being widened could also represent a massive shift in how the game is played, but it’s a tougher one to determine; as big and athletic as college players are now, it does make more sense to match the NBA’s floor dimensions. But college refs would have to actually start calling three seconds more often than they currently do to make it worthwhile.

Finally, we have the idea of moving from halves to quarters. It’s odd that this would be the biggest change, considering men’s college basketball is the only high-level version of the game to still use halves. The NBA obviously uses 12-minute quarters. The women’s college game went to quarters a few years ago. Even high school basketball is general played with quarters.

So while watching basketball that way wouldn’t be a shock to the viewer, it would be a shift for the sport. Especially with the new bonus rules, which would eliminate the one-and-one, and effectively put teams in the bonus earlier, with a chance to reset at the quarter break. That’s a big deal, and it would impact every single game in obvious ways, though it would probably be welcome, and potentially a way to help limit the unwelcome influence of overly litigious officials.

Whether any of these things happen anytime soon remains to be seen, but credit the NCAA and the NIT for being willing to experiment like this.