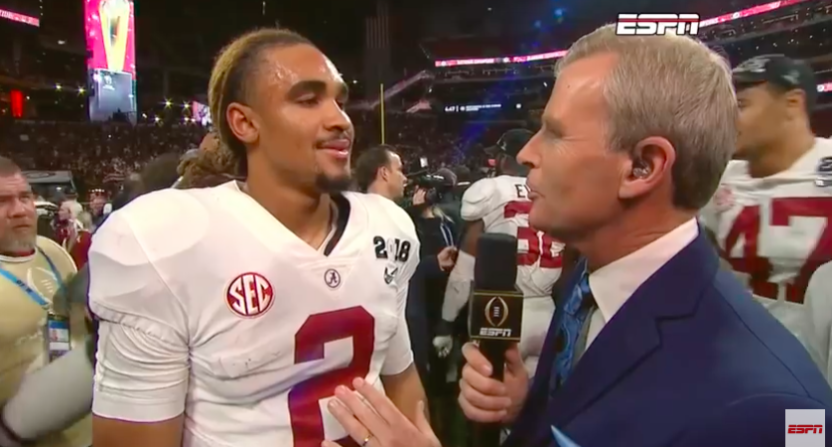 Last night’s National Championship Game between Georgia and Alabama was shocking for a number of reasons – the overtime game winner, the missed field goal at the end of regulation, the crazy big plays, etc. etc. But the most shocking of them all was Nick Saban benching starting quarterback Jalen Hurts at halftime in favor of true freshman Tua Tagovailoa.

Sure, Bama scored zero first half points, but Hurts has done nothing but win for the Tide in his two seasons, taking them to the title game in both his freshman and sophomore campaign. Hurts threw 17 TDs and just 1 INT this season as well. Meanwhile, Tagovailoa had only seen mop up duty against the likes of Mercer, Tennessee, and Vanderbilt.

However, Nick Saban showed what an evil genius he is as the switch provided a spark the Tide desperately needed and went on to win yet another championship.

After the game the biggest story had to be the quarterback change. So it made sense that sideline reporter Tom Rinaldi would seek out Hurts for a postgame interview, as controversial as a decision as it may seem. Rinaldi and ESPN faced criticism for interviewing Hurts after what must have been a whirlwind of an evening to try to process.

Tom Rinaldi, the current drama king of media, the biggest debbie downer of them all, finds Jalen Hurts for an interview. Just classic Tom.

The decision to interview Hurts is worth defending from a journalistic standpoint, though. Even though he’s just 19 years old, let’s not forget that Hurts has been on the national stage for over a year now. He’s had success. He’s dealt with adversity. He’s been the starting quarterback for the University of Alabama for two full seasons. I think he has the maturity to handle a postgame interview with Tom Rinaldi, no matter how many tears may or may not begin to fall.

If Rinaldi and ESPN don’t get that interview then we don’t get those quotes and Hurts doesn’t get that chance to share an inspiring moment. If ESPN and Rinaldi had not attempted to talk to Hurts, they would have been shying away from the biggest story of the night. And for what? For fear of offending Hurts or Saban or protective Alabama fans?

There’s no way that interview happens unless someone from Alabama’s athletic department and Hurts himself approve of it given the circumstances. They obviously know the storyline is going to be a big deal after the game and what should be coming. Maybe it would have been different if Alabama had indeed suffered a soul-crushing defeat. Perhaps then the questions and answers become more difficult.

But given the circumstances (that Hurts had just become a national champion) it was more than appropriate for Rinaldi to interview the quarterback. Especially since Hurts was such a visible cheerleader on the sidelines and being so supportive of Tagovailoa, it probably made it that much easier in actuality.

Hurts showed his true class in the interview and it turned out to be one of the best moments of the evening as he showed what being a great teammate and leader is all about.