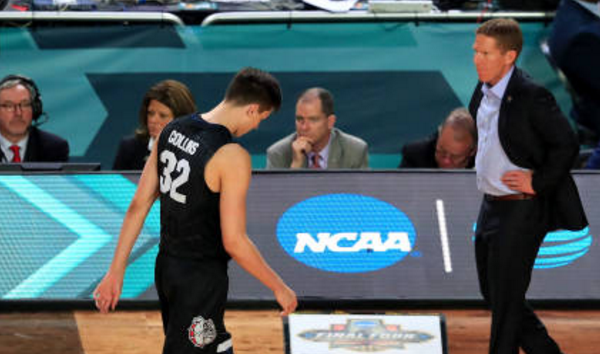 Freshman Zach Collins is not the most influential player on Gonzaga. He’s not the flashiest, he doesn’t pick up the most points and rebounds, and he doesn’t get noticed as a huge big guy — mostly due to the presence of Przemek Karnowski. However, Collins is a huge presence on defense, makes a very effective offensive option because of the high-low game with Karnowski, and can have a real impact on the glass.

In the days and weeks that follow, we’re sure to see many articles about why North Carolina won or Gonzaga lost. Lots of blame will be cast, people will be called (and some might actually be) sore losers, and fans will remember the game they want to remember. I don’t want to do that. I’m not going to say what impact anything had on the game or how things could have gone differently. All I want to do is present a few facts — I’ll leave the drawing of inferences to the readers.

Zach Collins went 4-for-6 from the floor, good for nine points. He also added seven rebounds. He had a huge defensive presence, adding three blocks onto Gonzaga’s stat sheet. And he did all of this in 14 minutes.

Why did Collins play so little?

He was in foul trouble throughout the entire second half, picking up his third foul just under two minutes into the half and fouling out with over five minutes remaining — he was on the court then because Karnowski also had four fouls. The refs called an awful lot of ticky-tack fouls in the second half, but by far Collins was hurt the most by bad fouls calls. Here are all five of Collins’ fouls, presented with light analysis about how deserved they were.

The first foul was a bad call, but not a particularly egregious one. Collins came up high to set a screen and got there a little late. There was minimal contact and it didn’t impede the play much — Justin Jackson got through it without much trouble — and the whistle came early enough that it almost felt like a call anticipating the contact that really didn’t end up coming. It was a bad screen by Collins — and he really shouldn’t have been so late setting that screen so high up — but it’s nothing that doesn’t happen relatively often.

Collins’ second foul wasn’t a great call, but it wasn’t a particularly bad one either. Isaiah Hicks pushed his way into the lane, and the seven-footer went up to meet him. Collins was leaning forward a tiny bit, something that we expect to look into perfectly if it’s a choice between a charge or a block, but not a call that needs to be made on a play where the vast majority of the contact was initiated by the offensive player. Again, it’s not an awful call, but really not one that looks like it should have been made.

This one is also a pretty bad call. Collins is just really tall with a long wingspan. He’s jumping forward a tiny bit, but he’s essentially going straight up while reaching for a rebound. There’s a bit of contact on the body, but Kennedy Meeks’ move to get the inside position in front of Nigel Williams-Goss was more of a foul than Collins’ rebound attempt here. This wasn’t egregious either, but this makes the third questionable foul call on Collins all game — and probably the worst of the three so far.

You’re going to have to trust me a bit on this one, because it happens really quickly, but this was by far the worst foul call of the game. Collins makes a quick move to the middle and gets good positioning. He had his arm up, but he in no way cleared out, as the ref so emphatically signaled. Collins had been very effective in his limited minutes until then, and this foul barely four minutes into the second half essentially ended his playing time for the game. This was a horrendous call, and one that had a definite impact on the trajectory of the game.

Collins’ fifth and final foul was certainly the most legitimate foul called on him all game. He had both hands on Tony Bradley’s body and pushed off while positioning for a rebound. That was something that Collins should have been far more aware of with four fouls already. His last one mattered.

I’m not going to blame these fouls for how the game turned out. Lots of tiny things can change a game. We can just as easily point to Karnowski’s too many missed shots underneath as to Collins’ missed minutes.

This is far more about holding the refs accountable for calls that potentially alter the game than it is about speculating how the game could have been different otherwise. Of the five fouls called on Collins, one was correct, three were questionable at best, and one was horrendous. That needs to be said, if only in defense of a player who should have had a chance to log more than 14 minutes in the National Championship Game.