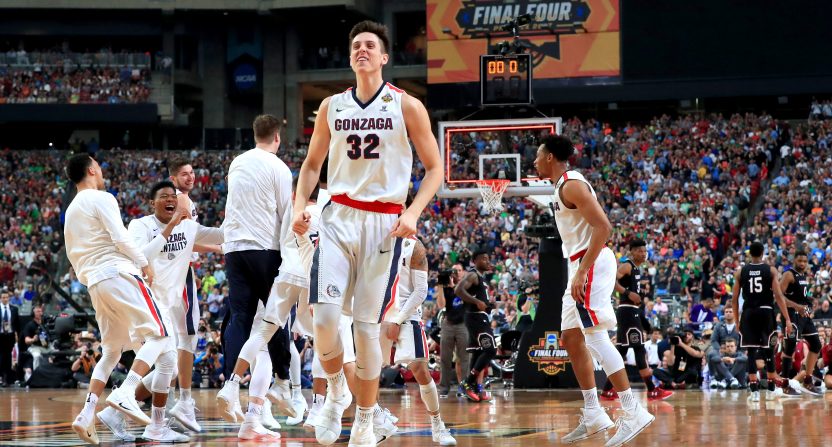 Collins, a 7-footer, never started for Gonzaga but was undoubtedly one of the team’s best players. He averaged 10 points, 5.9 rebounds, and 1.8 blocks in just 17.2 minutes of action.

He dominated the Bulldogs’ Final Four victory over South Carolina with 14 points, 13 boards, and six rejections, but didn’t have as much of an impact in the championship game against North Carolina, fouling out on some questionable calls in just 14 minutes.

While some people may say Collins should have returned for his sophomore year because he could have blossomed into a top-10 — and maybe even a top-five — pick, he’ll still be a first-round pick this year and could even sneak into the lottery. DraftExpress has Collins going 13th to the Nuggets as of Monday, and most other mock drafts agree that he will be a late lottery pick. A few have him going in the 20s.

Even the last pick in the first round gets a starting salary of anywhere between $781,040 and close to $1.2 million.

Collins released a statement on his decision, thanking the school and calling it “definitely one of the most difficult decisions I’ve ever had to make.” And while that’s what any player would say for PR reasons, it appears legitimate for Collins.

Here’s what his father, Mike Collins, said to local CBS affiliate KREM a month ago, far prior to Collins’ decision to go pro:

The Zags have had players leave early before. Most recently, forward Damontas Sabonis left last year following his sophomore season. He went 11th overall to the Magic and started for the Thunder as a rookie.

Although Gonzaga has never seen a player leave after his freshman year, all other four guys to leave early in the 2000s have been drafted in the top 15, with three being lottery picks. Of the five Zags prior to Collins to ever leave Spokane early, only one completely bombed. That was 7-foot center Paul Rogers, who left in 1997 after his junior year in 1997 and went to the Lakers in the second round. He never played an NBA game.

So history is on Collins’ side.

As for the Zags, they’ll still return five guys from their eight-man rotation, including All-American guard Nigel Williams-Goss. Losing Collins hurts, but this is still a preseason top-10 team that could reach the Final Four once again.