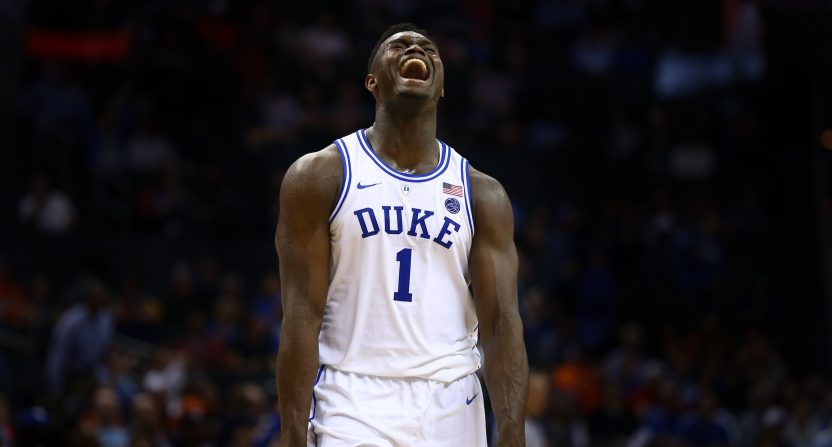 It took Zion Williamson just over two minutes in Duke’s ACC Tournament game against Syracuse on Thursday night to show that his knee feels fine. Williamson — out with a knee injury since Feb. 20 after his shoe fell apart — took flight for this monster jam, in what served as a preview for how the rest of the night would go in Duke’s 84-72 win.

The 6’7″, 284-pound freshman scored 29 points and didn’t miss a shot from the field, going 13-of-13 on field goals (though did struggle at the free-throw line making just 2-of-9 attempts). Williamson also pulled down 14 rebounds and had five steals. It was a ridiculous, unstoppable performance that showed why he’ll be the No. 1 pick in the 2019 NBA Draft.

Zion Williamson is the first Duke player with 25 points, 10 rebounds and 5 steals in a game since Christian Laettner on March 15, 1992 against North Carolina in the ACC tournament. pic.twitter.com/Bnc5iTbkgS

Syracuse guard Frank Howard tried to derail the performance with a dirty attempt to trip Williamson in the first half, but Williamson fortunately was able to avoid it and continue to dominate.

Williamson will look to continue his absurd play in the ACC Semifinals on Friday night against Duke’s biggest rival, North Carolina. The Tar Heels — 2-0 vs Duke this year — were the team the Blue Devils were playing when Williamson had the shoe explosion.