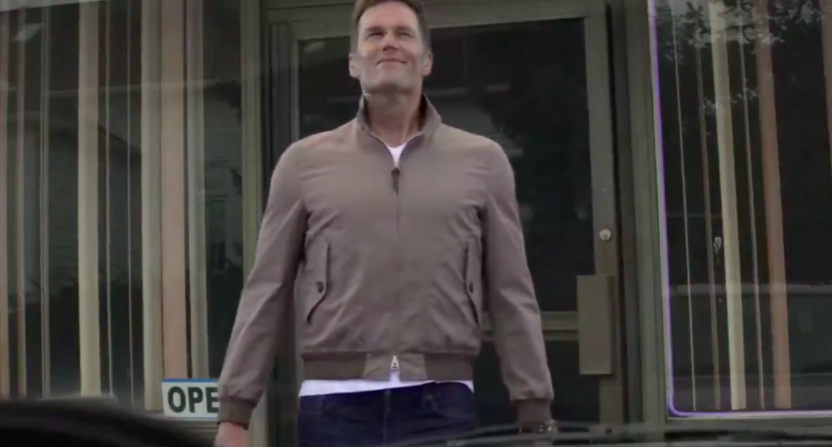 Remember back in March when New England Patriots owner Robert Kraft was charged by Florida police for soliciting sex in a massage parlor? Well, we’re already at the parody stage because that’s how quickly life moves in 2019.

“Living With Yourself” is a new Netflix show starring Paul Rudd as a man who quite literally has to compete with a cloned version of himself who is better at everything than he is. Rudd gets cloned in the first place by visiting a spa in a strip mall that specializes in “building a better you.” What they don’t tell you is that they clone you and then kill the original version of you so that the clone can replace you. However, in this case, Rudd’s original version isn’t killed and now he has to figure out how to co-exist with a better version of himself.

That sounds like a fun premise and if anyone can pull it off it’s probably Paul Rudd. But there’s a specific clip from the show that has sports fans buzzing this weekend. When Rudd’s character pulls up to the spa to check it out, Tom Brady walks out the door in what clearly looks like a wink and nod to the Kraft scandal.

The initial joke is that Tom Brady returns to the spa to create a reinvigorated clone of himself every time he wants to win another Super Bowl. However, it’s impossible not to take note of the similarities between this location and the location of Orchids of Asia Day Spa in Jupiter, Florida, where Kraft was caught in a prostitution sting.

Perhaps most shocking is that the scene was actually written this way before the whole Kraft incident went down, according to Deadline.

Apparently, show creator Timothy Greenberg included the scene in his script more than four years ago. Brady was allegedly cast for the scene before Kraft’s bust on prostitution charges. When that incident happened, they were nervous that Brady would pull out of the cameo. They thought wrong.

Greenberg also told Refinery29 that the real-life spa “looked almost exactly like what we were shooting. Like, I would have used it as a reference photo.” He also noted that he had to update the joke because he initially wrote it when Brady was 37 and had four Super Bowls, and has since won two more.

Who’s to say if Brady didn’t think much of the similarities at the time or if this was his way to get back at Kraft over his disappointment with the way his owner handled Deflategate. Regardless, if the Patriots win another Super Bowl this year, we’re guessing Kraft will be just fine with the mockery.

UPDATE: Brady was asked about the scene on Saturday and he was NOT happy with the connotation that he might be taking a shot at Robert Kraft.

Tom Brady answers questions about his cameo on a Netflix show and he wasn’t happy. pic.twitter.com/WpI7mrfGJy

Brady: “That’s not what that was about. I think that was taken out of context. Just like you’re taking it out of context and trying to make it a story for yourself, which has a negative connotation to it, which I don’t appreciate. It was meant to be something different than that so the fact that it’s a distraction or you bringing it up, that’s not something I want to be talking about.”

Reporter: “It’s not just me. The USA Today…says Patriots quarterback Tom Brady spoofs Robert Kraft with a cameo in a massage parlor. So it’s not just me.”

Brady: “I think it’s this type of media atmosphere that you create. The blame. The shame…I think there’s a lot of things that are said that are taken out of context. That you choose to make a headline out of as opposed to understanding what it’s actually about. Have you seen it?”

Brady: “And that’s what it was about. It wasn’t about [Kraft] except that you wanna try to use something and use it to take it out of context. [looking directly into camera] Is that what you choose to do? In the media? That’s what you’ve tried to do.”

Reporter: “When did you shoot it? If you shot it in the last year, wouldn’t you know that it might be construed that way?”

Brady: “No, it was shot on a greenscreen. It was agreed to a year ago. It was written four years ago. Again, it’s unfortunate that people would choose to think I’d ever do something like that about Mr. Kraft. That’s just a very bad assessment of my relationship with him. I would never do that.”