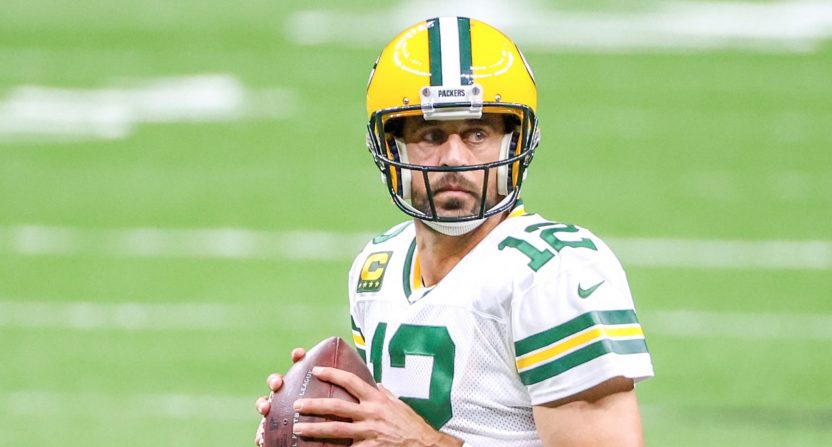 Somehow, someway, this weird-ass NFL season is approaching the midway pole. With most of the league preparing to play game number seven, let’s step back and look at 10 major questions surrounding the league as November approaches.

1. Are the COVID-19 outbreaks behind us?

That’s extremely unlikely considering the current national trajectory of the virus, but the league has avoided an outright schedule-related disaster thus far, and nobody’s been hit particularly hard since the Tennessee Titans encountered the biggest outbreak of the season a few weeks ago. The league, though, hasn’t ruled out adding a Week 18 if the dung hits the fan between now and the end of the year. Unfortunately, this story just isn’t going anywhere.

Throw Drew Brees in there too. The league’s three geriatric quarterbacks have surpassed expectations to various degrees early this season. Rodgers is an MVP candidate despite struggling in a Week 6 loss to Brady, who looks much stronger than he did last year with New England. Those three have thus far thrown 36 touchdown passes to nine interceptions for contending teams.

3. What fate awaits the Cleveland Browns?

They’re just the most interesting team in the league. They’ve spent so much money and draft capital building what they believe is a contender, and now they’re off to a 4-2 start- but those two losses have come in blowout fashion against fellow AFC North contenders. Is this the year the Browns finally get back to the playoffs? And if not, what do they do with that aging and expensive roster?

4. Who will rise to the top in the AFC North?

Speaking of the Browns, they’re unfortunately locked in with the Baltimore Ravens and Pittsburgh Steelers in the league’s toughest division. Both of those teams have already plowed Cleveland by a combined score of 76-13, Pittsburgh has yet to lose with Ben Roethlisberger back, and the 5-1 Ravens have already won four games by 14-plus points. That division race is going to be huge, with the winner most likely to challenge the Chiefs for the AFC crown.

5. Is the New England Patriots dynasty over?

The post-Brady Pats are now 2-3, and altogether they’ve lost seven of their last 11 regular-season and playoff games dating back to Brady’s goodbye season. It’s fair to wonder if the Patriots are set for a rebuild, and to question whether that process will involve head coach Bill Belichick. A looming Week 8 matchup with the Buffalo Bills could be telling.

6. Just how bad can the NFC East get?

Incredibly, it truly feels as though all four NFC East teams are ready to pack it in for 2020. But somebody in that putrid division will actually get to host a playoff game in January. At this point, the 2-4 Dallas Cowboys are the sadly obvious favorite over the limping Philadelphia Eagles, and the hopeless New York Giants and Washington Football Team, all of whom have one win. But Dallas is a bloody mess too! I could seriously see the Cowboys winning this thing at 6-10.

Sam Darnold of the New York Jets was the third overall pick in 2018, while Daniel Jones of the New York Giants was selected sixth overall in 2019. Naturally, they’re facing that New York media heat. And it doesn’t help that right now, they’re the two lowest-rated qualified passers in the NFL. This could get very ugly as both franchises come under immense pressure.

8. What happens if Carson Wentz continues to suck?

The media environment surrounding the Eagles is no friendlier, and Wentz is playing no better than Darnold or Jones despite the fact he makes $32 million a year. If he doesn’t turn it around between now and Week 17, Eagles fans will be outraged, and the calls for Jalen Hurts will become deafening. The problem is that Wentz’s massive contract makes him unmovable for at least two more years beyond 2020.

Feels as though dudes flirt with Michael Strahan’s record (22.5) on an annual basis. Chandler Jones and Shaquil Barrett both registered 19-plus last year, and Aaron Donald had 20.5 in 2018. Now, Donald is on pace for 20 and Myles Garrett is in the same range. Those guys both have the ability to go off on wild sack streaks, and it’s only a matter of time before somebody breaks Strahan’s mark.

10. Are the Kansas City Chiefs well-positioned to repeat?

They sure appeared to be on track to do so after an encouraging offseason, but they’ve slipped up in two divisional games already, and it’s fair to wonder about the state of the offensive line and the defense. They remain favored to win it all with Patrick Mahomes healthy and cruising, but it’s been 16 years since somebody last repeated in the NFL.