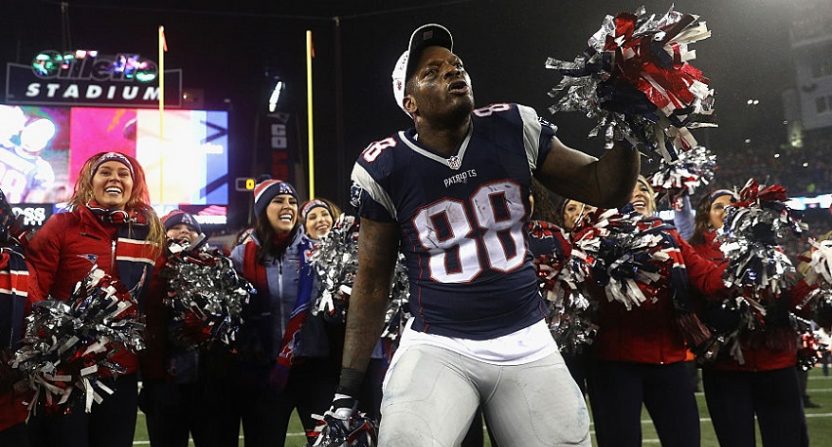 Amid the swirling rumors about Tony Romo’s playing future, there was an intriguing report about a non-football job that could potentially belong to the quarterback: color commentator.

One tidbit on #Cowboys QB Tony Romo: CBS is eyeing him as a potential replacement for Phil Simms in the booth. A big-time opportunity looms.

Would Romo even make a good announcer? That remains to be seen. He’s telegenic and can string a sentence together, but it’s hard to say just how good he’d be without watching him call a game.

Of course, it’s hardly rare for former players to make the transition to the booth. That was John Lynch’s stopover on the way to a front office job with the 49ers, as was it the case with Matt Millen. Lynch’s departure means there’s an opening on a broadcasting team. There are certainly a few recently retired players who would make intriguing broadcasters, such as Arian Foster. Steve Smith Sr. has already started work with NFL Network in the months since he retired for good.

But which NFL players who are still active seem like they would be a fit for the booth?

Strengths: Sunny personality that translates well to TV. Sure, he also comes off a little corny, but those are also the guys who tend to get broadcasting jobs.
Weaknesses: Possibly too bland, but then you could say the same for Romo.

Strengths: Has consistent broadcasting experience as a regular member of Showtime’s Inside the NFL.
Weaknesses: His past with domestic violence will have many questioning why he is able to keep getting new jobs with repercussions.

Strengths: Capable of being funny off-the-cuff, smart. Could lend a perspective on a position that isn’t well represented in media.
Weaknesses: Given that he’s a 28-year-old punter, he could be playing for another decade. Some might find him too goofy?

Strengths: Can keep a mean streak in the studio while coming off less belligerent than he appears as a player. If Bart Scott is fine as part of CBS’ Sunday morning roundtable, there’s no reason to think Norman couldn’t take on a similar role down the road.
Weaknesses: We don’t need another Rodney Harrison, and Norman might end up going the troll path.

Strengths: Outspoken and smart, willing to confront issues a lot of figures in the sports world steer clear of.
Weaknesses: Not a knock on him so much as the networks themselves, but he is almost certainly too political for network football shows, at least on a consistent basis.

Strengths: Bright, creative, funny, and willing to speak truth to power.
Weaknesses: Again, this has more to do with who networks put in broadcast booths vs. panel shows, but he seems more like a fit for the latter. Would require a broadcasting partner willing to do real criticism of the league’s policies.

Strengths: Very well-versed in spitting out the kind of platitudes that overrun any football broadcast.
Weaknesses: A big concern is him relying too much on his shtick of being the hardest working man in the room and the most respectful of the troops.

Strengths: Interesting background as an MIT student and lineman. Has shown in a commercial with J.J. Watt that he’s able to be personable on camera.
Weaknesses: Not exactly a name. While that doesn’t affect whether he can do the job well, networks that are spending into the billions for right deals usually don’t want to bank on unknowns.

Strengths: If you’re looking for someone to bark on TV, there are few better.
Weaknesses: Likely not a fit for a booth job, but able to rant outlandishly about football things for a Sunday panel show near you.

Strengths: Funny on his toes, wry, and clever. A huge star who is knowledgeable of the game and capable of being engaging sharing his thoughts.
Weaknesses: Doesn’t have a personality that adapts easily to the unctuous broadcaster persona. Not shy about being critical of media, including Mike Florio. Might rub some colleagues the wrong way.