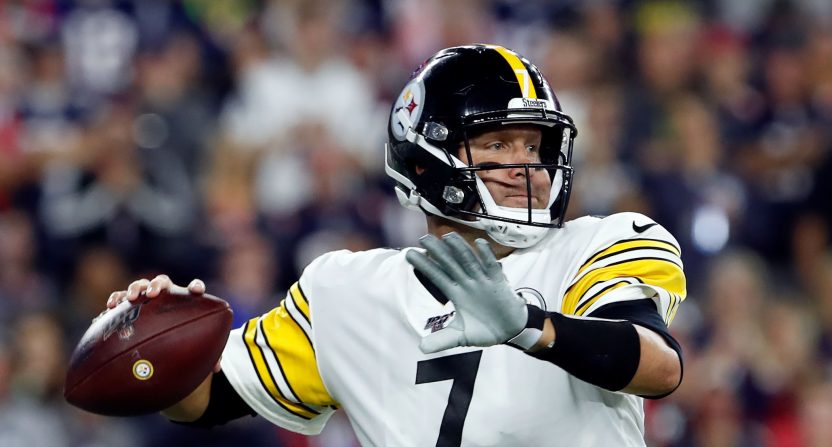 We intended to lead this list with Adam Gase. Who else could face more Week 2 pressure than a supposed offensive guru whose team scored just eight offensive points in Week 1? But Gase’s quarterback has mono, his star running back has a shoulder injury, and thus, the brand-new head coach of the New York Jets has some more rope.

The rest of these guys do not. Here are six coaches, three quarterbacks, and a wide receiver facing immense pressure in Week 2.

Cleveland Browns QB Baker Mayfield and head coach Freddie Kitchens: This was supposed to be a breakout season for the 2018 No. 1 overall pick, but he and his team both crapped the bed at home in Week 1. You lose to the limping Jets on national television in Week 2 and your season might be over. Then again, Mayfield would be praised for a big bounce-back effort on the road. Amazing how quickly fortunes can turn in this league.

Meanwhile, Kitchens’ squad took a ridiculous 18 penalties in an embarrassing loss to open the season. Considering the talent on the roster, there’s almost no rope for him. If Kitchens can’t right the Cleveland ship ASAP, folks will start to ask if he’s worthy of this job. Just a year ago, he was a relatively anonymous running backs coach.

Chicago Bears QB Mitchell Trubisky: In the first game of what was supposed to be a breakout third season, the well-supported Trubisky was a horror show as the Bears scored just three points in their nationally-televised home opener against Green Bay. Now he and the Bears travel to Denver to face former Chicago defensive coordinator Vic Fangio. If Trubisky struggles again and the Bears fall to 0-2, folks will start to wonder if 2018 was a fluke and if Chicago committed a colossal mistake taking the North Carolina product second overall in 2017.

Pittsburgh Steelers QB Ben Roethlisberger and head coach Mike Tomlin: Big Ben looked old and tired in a season-opening loss to the Patriots, and his job won’t get much easier against the always-tough Seattle Seahawks in Week 2. If the Steelers fall on their face again, you may start to hear whispers about the end of the Roethlisberger/Tomlin era in Pittsburgh. This team underwent a big offseason transition, and if that doesn’t pay off they might want to start from scratch in 2020.

Houston Texans head coach Bill O’Brien: People may be realizing that O’Brien isn’t — and never has been — a good situational coach. In fact, he’s one of the worst game managers in the league. He’s taking heat for his role in Houston blowing a chance to beat the Saints on the road in Week 1, and an 0-2 start with that talented roster could be trouble. Dude is just 42-39 in six seasons with this team.

Detroit Lions head coach Matt Patricia: After a complete meltdown in the season opener in Arizona, Patricia has just six wins in 17 games as Detroit’s head coach. That’s unacceptable considering the talent there, and the worst part is his defense continues to be toothless. He’s supposed to be a defensive specialist! I don’t think Patricia would survive another losing season (the Lions fired Jim Caldwell after back-to-back winning campaigns), so an 0-1-1 start with a home loss to the shorthanded Chargers would likely already have him on the hot seat.

Atlanta Falcons head coach Dan Quinn: Quinn’s supposed to be a defensive expert, but his defenses have ranked in the bottom 10 in two of his last three seasons in Atlanta. Injuries were a convenient excuse last year, but the Atlanta D was again dominated by a one-dimensional Minnesota attack in Week 1. If the Falcons fall flat again in Week 2 against rival Philadelphia in prime time at home, they’ll be 0-2 and we’ll begin to wonder if their season — and Quinn’s tenure — is circling the drain.

Tampa Bay Buccaneers head coach Bruce Arians: The quarterback guru certainly hasn’t fixed Jameis Winston yet. The turnover machine was again a disaster in a Week 1 home loss to the 49ers, and now both Winston and Arians are behind the eight ball for a short-rest road matchup with the division rival Panthers. Another ugly performance could cause the Bucs to feel buyer’s remorse with both Arians and his quarterback.

New England Patriots WR Antonio Brown: The Patriots aren’t rushing to judge Brown after rape allegations emerged this week, but you know the man was already walking a fine line in New England. The Patriots had no problems on offense in their opener and probably don’t want to mess with the locker room for no reason. If a potentially distracted Brown plays and struggles Sunday in Miami, the Pats could simply decide to cut the cord.