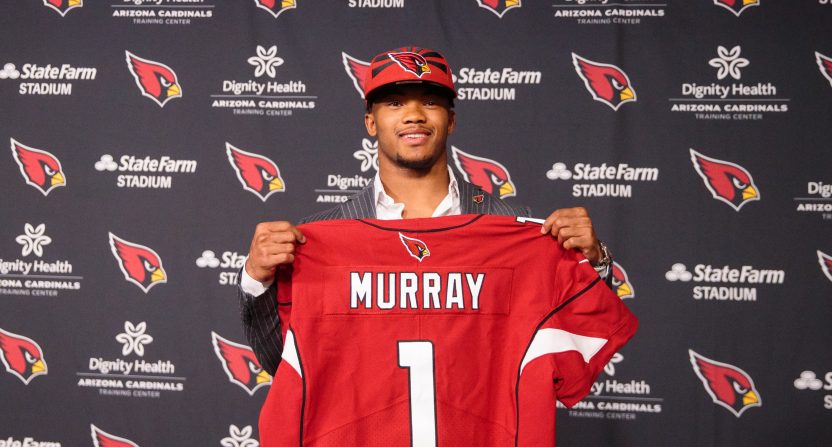 1. Arizona Cardinals QB Kyler Murray: Obviously he’ll be Arizona’s starting quarterback from the get-go, and you know Kliff Kingsbury will go out of his way to give Murray as many opportunities as possible to succeed. He should also have plenty of rushing yards.

2. San Francisco 49ers WR Deebo Samuel: The South Carolina product could play a bigger role than Dante Pettis did in San Francisco last season. The 49ers’ wide receiver depth chart appears to be wide open, and Samuel is ready to make an impact after four years in the biggest conference in college football.

3. Philadelphia Eagles RB Miles Sanders: After a fantastic final season at Penn State, Sanders is probably a better option than Jordan Howard in the Philly backfield. They’ll ease him in a tad after just one year as a starter in college, but Howard looked spent last season in Chicago and might have hit an NFL wall. And it’s not as though it takes long for running backs to emerge in the pros.

4. Indianapolis Colts WR Parris Campbell: Indy entered the draft lacking depth at wide receiver, and the speedy Campbell might not require much time before he at least earns more reps than Devin Funchess and Chester Rogers. Coming off a big senior season at Ohio State, he’d get plenty of opportunities to exploit coverage in an offense with T.Y. Hilton and Eric Ebron.

5. Kansas City Chiefs WR Mecole Hardman: Meet Tyreek Hill’s replacement? The Chiefs traded up in the second round to land Hardman, who has a similar skill set to that of Hill. However, the Georgia product remains quite raw after catching just 60 passes the last two years in the SEC.

6. Oakland Raiders RB Josh Jacobs: Running backs selected in the first round have to be drafted in all fantasy leagues, at least as flexes or fliers. Jacobs might need some time to adjust to the NFL, but he’ll be the guy in Oakland and the Raiders have some good distractions in the receiving game.

7. Seattle Seahawks WR D.K. Metcalf: The Mississippi product could’ve been a top-15 pick and nobody would have batted an eye, and his skill set is obviously enticing as hell. He might need some time to develop, but at least in Seattle he’ll have a strong quarterback and a potential opportunity in light of unfortunate news regarding Doug Baldwin.

8. Chicago Bears RB David Montgomery: The third-rounder out of Iowa State will have to win a battle with Mike Davis, but the Bears will prefer he take that role alongside Tarik Cohen. Regardless, Cohen probably can’t carry a full load.

9. Buffalo Bills RB Devin Singletary: LeSean McCoy is over the hill, Frank Gore is ancient and T.J. Yeldon has not lived up to expectations. That could mean there’s a path for the third-round Florida Atlantic product after a monstrous three seasons in college.

10. Los Angeles Rams RB Darrell Henderson: At the very least, handcuff this intriguing third-rounder out of Memphis to Todd Gurley, who’ll have to re-earn your fantasy trust.