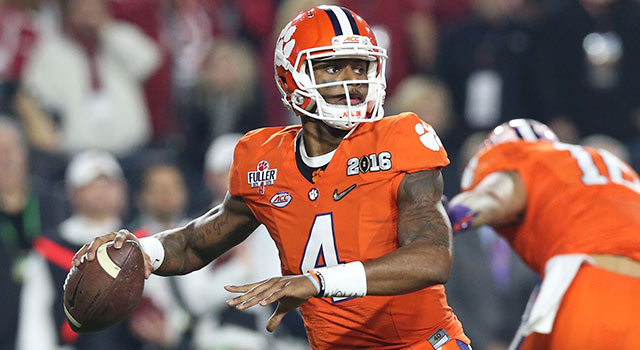 Yes, it’s far too early to project the 2017 NFL Draft with any accuracy. Mock drafts this early have no hope for accuracy, yet can serve as a starting point for the evaluation process. Knowing the prospects to look at is half the battle for evaluators.

Quarterbacks, offensive tackles and defensive lineman have long become the norm for the top overall pick, and those positions certainly stand out in these 10 projections. But with Jalen Ramsey’s rise and the elite prospects at running back, could we see that trend change?

Here are the 10 players with a chance at the top overall pick in 2017.

After guiding Clemson’s offense to the National Championship, Watson deservedly enters the 2016 college season as the country’s top quarterback prospect. While he’ll need to continue to add bulk and show better driving ability to throws on the perimeter, Watson possesses the requisite arm talent and high-end athleticism to not only threaten as a runner, but offer poise and plus movement skills as a pocket passer. With the rise in quarterback value, and considering which two quarterbacks went 1-2 in last year’s draft, Watson has a great chance to be the first overall pick.

Many in the media will likely become over-bullish on Kaaya’s upside, as he has awesome arm talent and flashes of high-level ability. He’s still developing as a progression-reading passer and still has too many errant throws or mistimed opportunities, and isn’t a first-round prospect yet. Still, with how quickly last year’s quarterbacks were pushed up and Kaaya’s upside, it’s certainly possible he could work his way into the discussion with a strong 2016 campaign.

Only twice in the last 30 years has a running back been taken first overall: Ki-Jana Carter in 1995 and Bo Jackson in 1986. Fournette still has to avoid injury in 2016, but his play thus far in his career has wowed to the point that he’s reached, and may be on the verge of surpassing, Adrian Peterson’s hype as a college running back. Fournette is a rare physical specimen, and may trump Peterson and Todd Gurley in running back talent by the time the 2017 draft rolls around.

Far less likely than Fournette, Dalvin Cook deserves ample attention as a near-elite running back prospect and should still merit top-10 consideration should he stay healthy. With rare balance and top-end burst in the open field, Cook has the body type of an every-down back and the finishing speed of a speed back. First overall is unlikely, but it wouldn’t surprise if he’s one of, if not the, best running back in the NFL at some point.

Myles Garrett is seizing his opportunity at A&M to grow into a leader on and off the field: https://t.co/z0UoDXcTV0 pic.twitter.com/79kdkJl13p

Healthier (so far) than Jadeveon Clowney and possessing a far better motor than Robert Nkemdiche, Myles Garrett looks to finally be the elite defensive line prospect that blossoms into an NFL star. Garrett has a freakish frame with natural interior and in-space disruption ability, and he’s only in the development stages of technique and patience as a rusher. At his ceiling, Garrett can legitimately contend with J.J. Watt as the NFL’s best defender.

With an ideal modern defensive end body type and the length to work on the perimeter, Lawson stands out as the initial best edge-defender in the 2017 class. Still with work to do in improving his upper half positioning and offering added impact as an edge-setting run defender, Lawson has the upside, and positional value, to warrant a top overall pick if he hits his ceiling.

It was Jonathan Allen, not A’Shawn Robinson, Jarran Reed nor Reggie Ragland who was the Crimson Tide’s best defensive player. Penetrating and disrupting from every defensive alignment and at multiple positions across the line, Allen has another year to develop as a technical pass-rusher but has already flashed so much as a run and pass defender. He would have been a first-rounder in 2016 despite being still raw.

Almost by default, the 2017 class’s best offensive tackle prospect will be considered for the top pick in the draft. Historically over the last 10 years, an offensive tackle has not been selected within the first four picks just twice, including last year. Robinson still has some work to do to merit the top overall pick, especially in not over-exposing his chest plate and working with more efficiency on the perimeter. But he has the tools (and the Alabama pedigree) to be in firm consideration at this point for the top left tackle prospect.

Missouri has become known for churning out NFL-level pass-rushers, including Shane Ray, Markus Golden and Kony Ealy in recent years. But Charles Harris might be the most talented and likely to go high of the bunch. The long, fluid and smooth Harris is still developing his rush repertoire, but has already found success against some of the SEC’s best left tackles and should only build on his college success thus far.

Michigan’s highest-touted defensive back recruit since Charles Woodson, Jabrill Peppers has been frustratingly utilized thus far in his college career. He’s bounced between cornerback and safety, but hasn’t been able to get comfortable in either. He’s not quite a Jalen Ramsey-level athlete, but he could be close and would be a similar talent at safety. And after Ramsey was considered for the top overall pick had the Titans held onto the selection, another top defensive back should be in play in the modern NFL.