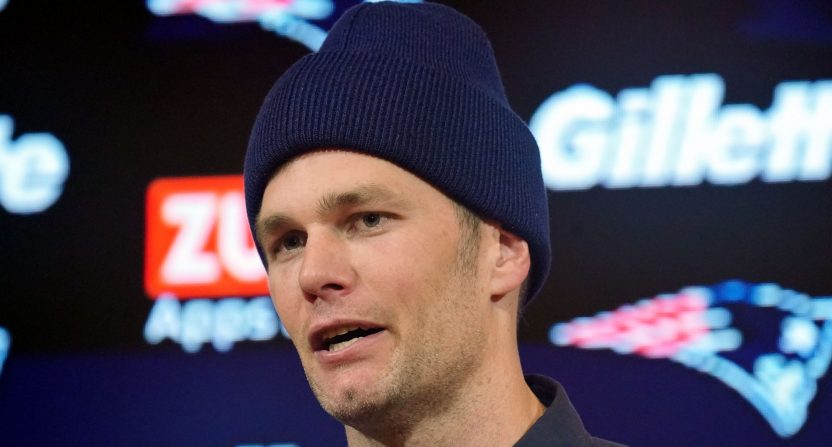 The 2020 NFL offseason is here. And with free agency just six weeks out and the draft in just over two months, it’s time to make some predictions.

Here are 10 developments we’re anticipating in the weeks and months to come:

It makes no sense for the Patriots to bring back Brady without a discounted rate, because that would prevent them from being able to re-sign all of their in-house free agents and also upgrade the rest of the offense. It’s a lose-lose, and they’d be better off letting Brady walk. The Buccaneers aren’t the favored landing spot, but they have the money to spend, they have Bruce Arians, and Brady would have the best 1-2 wide receiver duo in the NFL. I also think Arians would prefer Brady bridge the gap to a new quarterback in a year or two, rather than waiting out the interception-plagued Jameis Winston.

The Pats could try to land somebody like Winston, Philip Rivers, Ryan Tannehill, Marcus Mariota, Andy Dalton, or Teddy Bridgewater. Or they could decide to save their money, regroup for a year, and tank for presumed No. 1 2021 draft pick Trevor Lawrence. I wouldn’t be surprised if they did exactly that by starting Jarrett Stidham for a season.

3. Drew Brees returns to the New Orleans Saints for one more year

Ultimately, Brees will decide that there’s too much talent and too much money is on the table to walk away after his highest-rated season yet. The 41-year-old still has it, and he’s a competitor. He’ll want to take one last shot at a second ring.

The Carolina Panthers are clearly entering a rebuild, so it doesn’t make much sense to pay Newton more than $20 million in a walk year. They can save almost all of that by trading him away, and the Chargers make a lot of sense now that it’s obvious Rivers is done in L.A. They’re moving into a new stadium with the Rams, and this would be a hell of a way to drum up hype. Say what you will about Newton’s game in recent years, but the guy is a brand.

Russell Wilson is the current leader of the pack with an average annual salary of $35 million. But it’s a year later now, and Mahomes is both better and younger. You have to figure that’s worth at least $38 million per year, but likely closer to $40 million. I figure that in the midst of all the euphoria, the Chiefs will just throw him an even $200 million over five years. The alternative is to wait a year, but Mahomes could become a lot more expensive in 2021 or 2022.

6. Dak Prescott gets stuck with the franchise tag

Prescott was willing to bet on himself in 2019, and if Mahomes strikes a deal like that, I’m guessing he wouldn’t be willing to accept anything less than $35 million per year from the Dallas Cowboys. He’ll bet on himself one more time, but in this case at a rate of about $27 million for 2020.

That would enable the draft-pick-rich Dolphins to navigate the top 10 in order to land the 2018 SEC player of the year. Why the hell not? Might as well load up on as many potential franchise quarterbacks as possible, and with the No. 5 overall pick, moving up a spot or two shouldn’t be too prohibitive anyway. Plus, they can wait for Tua’s hip to get right.

Andrew Marchand of the New York Post reported recently that CBS “is prepared to compete very aggressively” to keep Romo, who everyone knows will command a massive payday this offseason. I think ESPN will court him for Monday Night Football but lose out due to CBS’ right of first refusal. But the MNF is so product that the desperate Worldwide Leader will instead take a shot at Cutler, who has reportedly been meeting with networks about a future in TV.

10. The regular season arrives without a new collective bargaining agreement

Deadlines work wonders, and we’re not even close to that. Everything you’re hearing now is strategic. Both sides are posturing, and I really don’t think the players are down for 17 games. I’m not sure the owners expect the players to go for that anyway, but it’s a bargaining chip, and it will probably linger well into 2021.