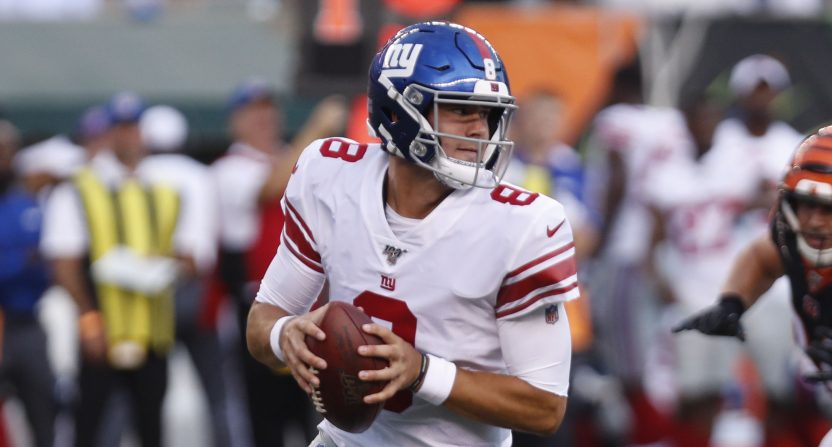 At last, the real damn thing is here. Or at least it’s what’s next now that all 65 NFL preseason games are in the books. Most of the preseason is useless, but several young players emerge more quickly than expected and/or find themselves in particularly advantageous situations every August.

Here are this year’s big winners from the exhibition season.

New York Giants QB Daniel Jones: Hate the pick all you want, but you can’t hate the player considering what Jones did this month. He completed all but five of his 34 pass attempts for 416 yards in an interception-free preseason run, which will leave ancient starter Eli Manning absolutely no margin for error entering the regular season.

New Orleans Saints QB Taysom Hill: He’s already one of the most uniquely talented offensive players in the NFL, but this preseason allowed Hill to prove his worth as a passer. The dual threat completed 40 of 59 passes for 443 yards while tossing three touchdown throws. That was good for a 99.8 passer rating, and he added 148 yards as a rusher. You get the feeling Hill will become something even more special in 2019 and beyond.

Indianapolis Colts QB Jacoby Brissett: Nobody in the world benefited more from Andrew Luck’s retirement than Brissett, who also put together a tremendous performance in Week 2 of the preseason before sitting down the rest of the month. He might surprise a lot of folks in the starting role.

Houston Texans RB Duke Johnson: He was disgruntled in Cleveland. Then the Browns finally caved and traded him to the Texans, who then lost starter Lamar Miller to a season-ending injury. The versatile Johnson didn’t touch the ball this preseason, but he’s still a major winner.

Dallas Cowboys RB Tony Pollard: The obvious victor from the Ezekiel Elliott holdout gave the Cowboys a lot of leverage by averaging a superb 5.6 yards per carry on 15 August attempts. He might not be ready to completely replace Elliott, but he does look good enough to play a major role as a rookie.

Los Angeles Chargers RB Austin Ekeler: The obvious victor from the Melvin Gordon holdout gave the Chargers a lot of leverage by averaging a solid 5.0 yards per carry on 12 August attempts. The versatile third-year back might seriously be as good as Gordon.

New England Patriots WR Jakobi Meyers: The undrafted free-agent wideout emerged quickly and consistently as one of the most productive receivers in New England, and he already seems to have chemistry with Tom Brady. The NC State product caught 20 passes for 253 yards and two touchdowns in preseason action, and now we wait to see if that’s enough to crack the defending champions’ 53-man roster.

Indianapolis Colts WR Deon Cain: The second-year sixth-round pick put the cherry on top of a fantastic offseason with 154 yards and a touchdown in his last two preseason games. Don’t be shocked if he winds up right there with Parris Campbell, Chester Rogers and Devin Funchess statistically this season.

Kansas City Chiefs new weapons Mecole Hardman/Darwin Thompson: This is a 2-for-1 as the rich get richer in Kansas City. Hardman scored two touchdowns and was a consistent standout while Thompson ran like a stud while averaging 5.0 yards per carry. Both look ready to play huge roles this year. Poor Andy Reid.

Philadelphia Eagles OT Andre Dillard: The No. 22 overall pick isn’t supposed to play a huge role as a rookie, but he appears to be ready for that if opportunity knocks. Dillard just dominated opposing defensive linemen throughout the preseason. It’s worth noting that Eagles starting left tackle Jason Peters is 37 years old.

New England Patriots DE Chase Winovich: Looks like the Pats found another beauty outside of Round 1. Winovich never should have slid to Round 3, and he’s already shown that with a killer August. The Michigan product had 12 tackles and 2.5 sacks while bringing constant pressure throughout the preseason.

Carolina Panthers DE Brian Burns: It’s a lot of pressure filling Julius Peppers’ shoes, especially considering that Burns is the first true pass-rusher chosen in Round 1 by Carolina since the Panthers took Peppers third overall back in 2002. But Burns delivered this month with four sacks in three exhibition outings.