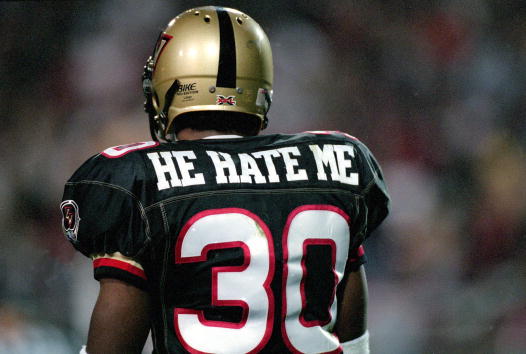 A man wearing a cowboy hat and poncho double-fisting Bud Lights hoots and hollers from the stands.

Other fans hold signs with generic platitudes that all seem to have been made by the same person and distributed beforehand.

McMahon, looking more like a normal 55-year-old man that he ever seems during a pro wrestling show, turns to face the cameras and admire the fans before speaking.

“Welcome to the XFL…we welcome you to our brand of football. We welcome you to our game. We invite you to enjoy the all-access pass that gives you freedom to go places other leagues have determined to be off-limits. So to our worldwide television audience, to fans all over North America, to fans here in Las Vegas…on behalf of the players we simply say thank you, thank you for the privilege of competing before you here tonight.”

Then, unleashing that patented snarl that only Vincent Kennedy McMahon can… 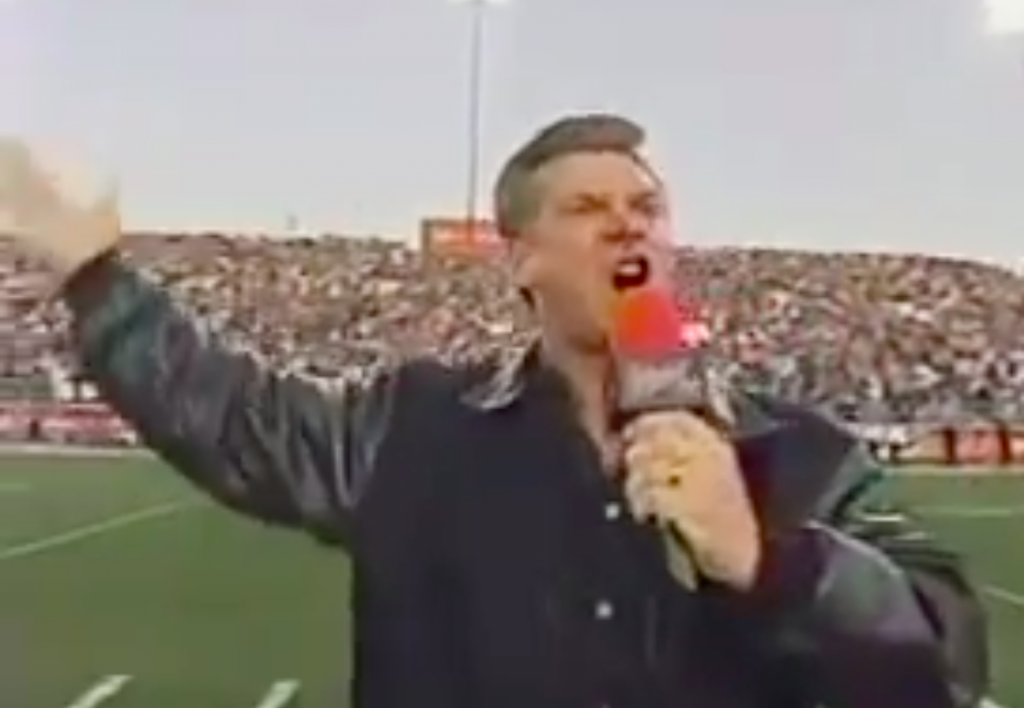 More fire. More fireworks. More cheers. The Las Vegas Outlaws emerge from behind a black curtain to thunderous applause. The New York/New Jersey Hitmen follow to a chorus of boos.

The XFL is officially born.

The first play in XFL history will forever stand as a monument to the pre-CTE world as “Director of Competition” Dick Butkus introduces the league’s answer to a coin toss: The Scramble.

Two players, one from each team, line up next to one another and race to be the first one to grab a waiting football 20 yards away. A few weeks from now, Orlando Rage free safety Hassan Shamsid-Deen will separate his shoulder, ending his season, fighting for possession during a Scramble. For now, NY/NJ’s Donnie Caldwell and Vegas’s Jamal Williams hustle for the same ball and Williams wins it. It’s a sign of things to come as Vegas goes on to win the sloppy, defensive slugfest, 19-0.

February 3, 2001 was a great day for the nascent professional football league. An estimated 14 million viewers watched the telecast, which cut between this game and the concurrent contest between the Orlando Rage and Chicago Enforcers. The 9.5 Nielsen rating was actually double what NBC had promised advertisers.

It was the best day in the history of the XFL and it was all downhill from there. Ratings plummeted the following week (4.6) as audiences realized the actual gameplay was subpar, families were turned-off by the over-sexualized content and concerns over game-fixing muddied enthusiasm. Being largely ignored or ridiculed by the likes of ESPN and national newspapers didn’t help either. Despite averaging a 3.0 rating across the entire season, the last six weeks of coverage averaged a meager 1.7. 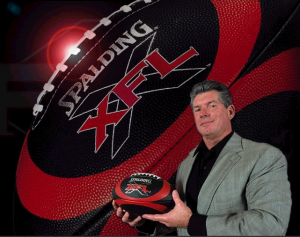 After the Los Angeles XTreme took home the first and only league championship, the XFL folded in May. The WWF and NBC each reportedly lost $35 million and the failed league routinely mentioned in discussions about the worst TV and sports ventures in U.S. history.

All of which is to say that, 15 years later, the NFL has a lot to thank the XFL for.

Much like the USFL or ABA before it, the XFL’s legacy will live on in the way it influenced the bigger, stronger, more traditional league it was attempting to replace. Perhaps unlike those predecessors, the XFL will also be remembered mostly for how it influenced the way we watch the sport rather than the way the sport itself is played.

No, you won’t see The Scramble in NFL games anytime soon. You certainly won’t ever see an NFL TV broadcast linger uncomfortably on cheerleaders’s bodies nearly as long. But there are plenty of aspects to the way you watch the NFL in 2016 that come directly from this one-season-wonder.

NFL audiences are accustomed to the access cameras and microphones have given to coaches and players during games, but the XFL deserves credit for making these innovations commonplace. Cable cams/skycams had been introduced sparingly to the NFL years before but the XFL was the first league to put them to wide use, bringing audiences closer to the game action. Coupled with this was the use of seemingly-armored cameramen who would run onto the field immediately after plays to get close-up shots. The NFL hasn’t taken that step quite yet but the more networks try to innovate different ways for audiences to get as close as possible it seems like only a matter of time.

We’ve slowly acclimatized to the idea of coaches being interviewed mid-game by now. In baseball we’ve even seen managers get interviewed mid-inning. The XFL was the first league to accentuate the practice of sideline interviews with coaches as well as players. In fact, players were mic’d regularly, something usually only done in special cases by the NFL—and even then edited together after-the-fact and played later in the game—or part of non-live programming for NFL Films. Of course, this could often lead to uncomfortable moments when players writhed in pain for the listening pleasure of the audience. But if access is what you wanted, access you were granted.

Speaking of access, the XFL put a strong focus on taking audiences inside the locker room. This last bastion of player privacy was now an open book, as TV screens broadcast halftime speeches, lingered on banged-up players nursing injuries and generally gave America the not-nearly-as-interesting-as-they’d-hoped peek behind closed doors. It wasn’t always a great idea but it was another change to the way we consume pro sports that’s since became commonplace. Nowadays, audiences expect to see a post-game locker room celebration or see what the mood is like following a tough loss.

A great example of the kind of access the NFL now deems commonplace that might have been unthinkable before a post-XFL world would be Hard Knocks. The “No Fun League” was considered terrified to pull back the veil for so long until the XFL did it for them, revealing the ways this kind of access was often educational or endearing rather than titillating. Nowadays, networks can’t churn out reality programming about the off-field antics of pro athletes fast enough. Was the XFL wrong or just ahead of it’s time (in one regard)?

“The NFL has loosened up to allow things like skycams and on-field interviews. All those things were directly because of the push from the XFL,” said John Filippelli, a former vice president of production at ABC Sports and, while at NBC Sports, a producer and coordinating producer for the NFL. “Look at ‘Hard Knocks’ [on HBO]. The NFL would have had no part of those 10 years ago. Overall, it’s extremely subjective, which you want to remember about the XFL in hindsight. For creativity, I give it an A. For the actual football product, it was a D.”

Getting To Know The Players

Before the first play of the game between the Hitmen and Outlaws, play halts and a cameraman joins the Outlaws’ offensive huddle and lets each player introduce themselves, stating their position and where they went to school. It’s not the kind of individualistic concept the NFL would do at the time but the idea of players looking directly into the camera and introducing themselves was eventually mimicked by TV broadcasts in a cleaner and more controllable way. If you’ve ever watched Monday Night Football, you’ve seen the influence. 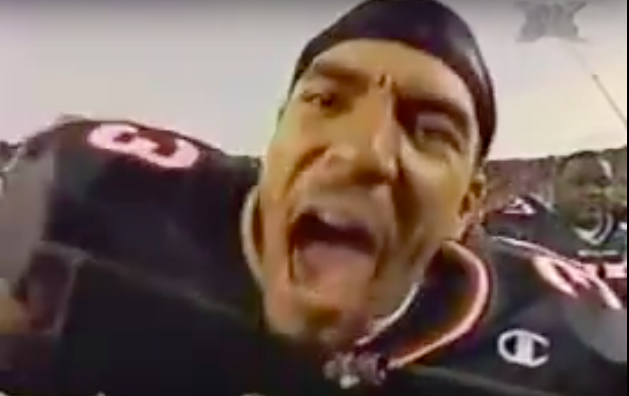 We certainly haven’t seen the NFL’s version of “He Hate Me” and probably never will, but the way players can customize those on-screen introductions is as close as they’re going to get.

It’s hard to remember a time when the NFL on Fox wasn’t a mainstay on American television but the “upstart” network only began broadcasting the sport in 1994. Before that, CBS and NBC were the only places fans could watch NFL programming, outside of the two primetime games each week. After CBS lost the NFC rights to Fox in 1994, they aggressively-won the AFC rights away from NBC in 1998, leaving the network that first broadcast NFL games in 1939 without any football at all.

After shaping what America would come to know as NFL coverage, NBC suddenly went into a programming free-fall and their sports division nosedived as a result. Unable to afford Monday Night Football rights, the company was out of options until the XFL emerged. The result was a ratings disaster but it indicated a start to the long, strange road the network would take to get back into the NFL game, culminating with the creation of NBC Sunday Night Football, which has since supplanted Monday Night Football in terms of relevance and audience.

It’s perhaps specious logic to think that the XFL begat NBC’s return to NFL programming dominance, but at the very least it remains a signpost along the way that showed us just how much the network was invested in primetime football. Not to mention it was a not-so-subtle middle finger to the NFL at a time when the league was closing all its doors.

Tapping Into Our Desire To Minimize Kicking

One of the XFL’s basic football play tenants (along with “concussions are for quitters”) was the sense that kickers were to be seen on the sidelines and not seen actually kicking as much as possible. It made sense given the hyper-aggressive nature of a league that was trying to one-up an already hyper-aggressive league. As such, the PAT was abolished in lieu of requiring the offense to score an extra point against the defense.

The NFL hasn’t gone that far, but the league has always had an uneasy feeling about the power of placekickers, at least in terms of how easy their job was when it came to extra points. Last year, the NFL changed the extra point from a 20-yard-kick into a 33-yard-kick. The move has not only resulted in more misses but also more two-point conversion attempts.

It wouldn’t be quite correct to say that the XFL’s way of doing things influenced the NFL, but it would be fair to say that the XFL was ahead of the curve in terms of how professional football really feels about the value of placekickers, especially when it comes to deciding the outcome of a game. The more we can keep the ball in the hands of an offense, the more entertained we are.

The XFL proved to be something of a spectacular disaster for McMahon and NBC. Why the two didn’t conspire to take over the Arena League—no one in the history of entertainment knows arenas better than McMahon, the games are weather-controlled, the small crowds would be far less obvious and it could have competed with the NFL without actually competing with the NFL—it’s impossible to know. Hubris, perhaps. But at the end of the day, and at the end of just one year, entertainment was at the heart of everything the XFL did. For better or worse.